Truth's Victory Over Error: A Commentary on the Westminster Confession of Faith (eBook) 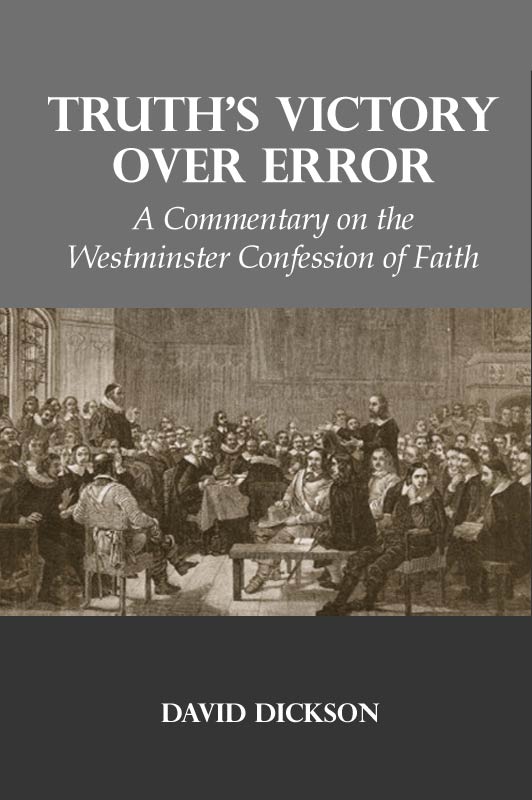 Truth’s Victory Over Error was the first published commen­tary on the Westminster Confession of Faith. It was written by a contemporary of the Westminster Assembly, and a close ministe­rial associate of the Scottish commissioners to the Assembly. David Dickson (1589‑1662) was the son of a wealthy Glasgow mer­chant. He studied at Glasgow College under the great exegete Robert Boyd of Trochrig, and in 1610 was elected regent to in­struct in Greek. He became minister of Irvine, in Ayrshire, in 1618, but in 1622 was suspended by Archbishop Spottiswood because he refused to conform to the Articles of Perth. These were an attempt by the king to impose Episcopalian worship on Scotland. The articles to which Dickson refused to conform provided for kneeling rather than sitting at the Lord’s Supper, private com­munion, baptism not withheld longer than one Sunday and adminis­tered privately where necessary, the participation of bishops in confirmation, and the observance of church holy days such as Christmas and Easter.

In 1622 Dickson was sent into exile in the North of Scot­land, but within about a year was permitted to return to Irvine, where a notable revival began. Dickson began preaching on the street on market day, and many were brought under conviction of sin. One of the fruits of Dickson’s pastoral labors was “The Sum of Saving Knowledge,” a presentation of the gospel which he co‑authored with James Durham, and which is still printed in Scot­tish editions of the Westminster Standards. It was a model used by ministers in catechising their flocks.

Resistance to the king’s efforts to dictate a ceremonial worship culminated in the Glasgow Assembly of 1638, and the signing of the National Covenant. Dickson was a prime mover in the preparations for the Assembly, drafting a paper insisting that representative ruling elders should be commissioned to the Assembly along with the ministers. He was moderator of the General Assembly in 1639, when the king made important conces­sions to the popular uprising.

In 1640 Dickson was appointed Professor of Divinity at Glasgow University. In 1650 he was transferred to the corre­sponding chair of theology at Edinburgh University, which he held until his death in 1662. A large proportion of the Church of Scotland’s ministers in the era of the Westminster Assembly thus received their theological training from Dickson. Dickson also contrived a scheme for ministers of the church to publish plain expositions of portions of Scripture, and so together to provide a commentary on much of the Bible. The Banner of Truth has made a number of these expositions available once more: George Hutchi­son on John, James Ferguson on the Epistles of Paul, Alexander Nisbet on I and II Peter, James Durham on the Song of Solomon, and Dickson on Matthew, Hebrews and the Psalms; the commentary on Psalms (1653‑1654) is a superb exposition of Christian experience.

It was in the first two years at Edinburgh, 1650‑1652, that Dickson delivered his lectures on the Westminster Confession of Faith. These were apparently the basis for his printed commen­tary on the Confession, which was published posthumously in 1684. The book has not been reprinted since 1726. Dickson died soon after the Restoration of the Stuart monarchs. Charles II was sweeping away the legislation that had established Presbyterian worship and church government. But Dickson knew the cause was not lost: “What is come of all the blood and prayers of many years, now when all is overturned? Says he ‑ There is the Con­fession of Faith and Catechisms; and these are more worth than all the blood or prayers that have been!”

CHAP I.: Of the Holy Scriptures

CHAP. II. Of God, and of the Holy Trinity

CHAP. VI. Concerning the Fall of Man, of Sin...

CHAP. VIII. Of Christ the Mediator

CHAP. XVII. Of the Perseverance of the Saints

CHAP. XIX. Of the Law of God

CHAP. XXIII. Of the Civil Magistrate.

CHAP. XXIIII. Of Marriage and Divorce.

CHAP. XXV. Of the Church.

CHAP. XXVI. Of the Communion of Saints.

CHAP. XXVII. Of the Sacraments.

CHAP. XXIX. Of the Lord's Supper.

CHAP. XXXI. Of Synods and Councils

CHAP. XXXII. Of the State of Man After Death, And the Resurrection of the Dead

CHAP. XXXIII. Of the Last Judgement. 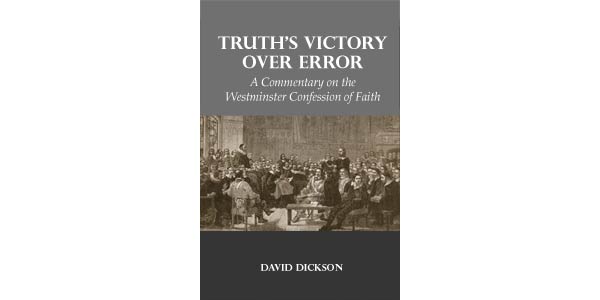