A Treatise on Earthly-Mindedness (eBook) 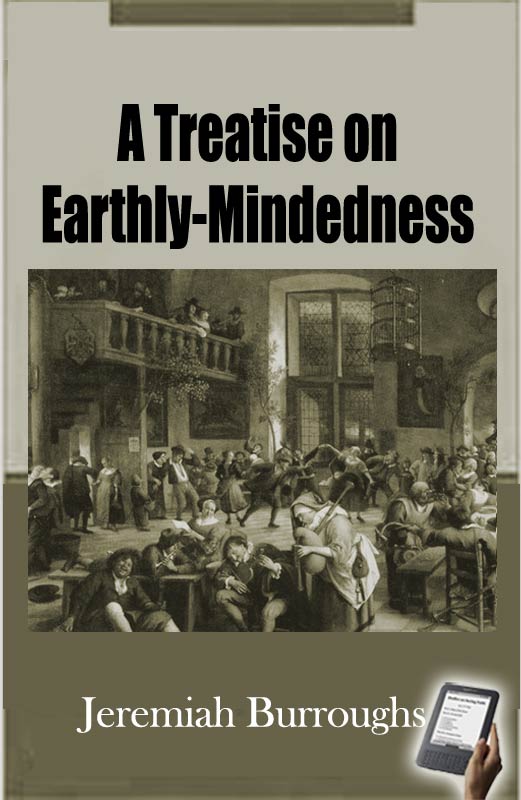 It was the saying of a servant of Christ, "Every day a Christian spends on earth is a day lost in heaven." He meant it of the place, not the company, for what makes heaven, but union and communion with God in Jesus Christ? This being attainable in this life, what keeps a Christian from living in heaven while he lives upon earth? Truly our fellowship is with the Father and with His Son Jesus Christ, 1 John 1:3 . Our conversation is in heaven, said another apostle, Phil. 3:20 . And I live, yet not I, but Christ liveth in me, and the life which I now live in the flesh, I live by the faith of the Son of God, Galatians 2:20 .

These were men on the earth, subject to infirmities as we are, yet living in heaven. And there are yet in this declining, wanton, Christ-denying age, a generation upon earth thus living, whose lives and graces, though hidden under a mean outside, under many reproaches and infirmities, yet shine inwardly with the glory of Christ upon them who, though they are in the world, yet follow the Lord with a different spirit than the spirit of the world; and among these hidden ones of the Lord, this blessed man (the Preacher of these sermons, of whom the world was not worthy) was such a one who, while he was upon earth, lived in heaven. And as you may easily perceive, the end and scope of these sermons is to wind up your heart to a like frame and posture, viz., to take it off of perishing vanities, and to set it on that which is the real and durable substance.

We see upon what weak shoulders the fair neck of all worldly pomp and glory now stands, and how the Lord is winding up and putting an end to the glories of the kingdoms of men, who have not contributed their strength and power to the advancing, but rather to the pulling down and eclipsing of the glory of the kingdom of Jesus Christ. Besides what the world tells us, never has an age had more examples laid before them of the world's vanity than in our days. Therefore, our hearts should sit loose to all things that cannot stretch themselves to eternity. The Apostle's reason is full of weight,

And this exhortation he puts on by this argument, The time is short, or as the word is, "The remainder of our season is now folding up, as a veil or curtain into a narrow room."

Time is short and life shorter, and the end of all things is at hand. We have greater things to mind and to set our hearts upon. The divinity of this holy man's spirit did much appear in this, that having much of the comfort that earth could afford him, he still looked upon all creature contentments with the eyes of a stranger, and in order to the raising of his soul to a more holy, humble, serviceable, self-denying walking with God. For a man who enjoys little or nothing in this world to speak much of the world's vanity and emptiness, and of taking the heart off that, is not as much as when a man is surrounded with the confluence of creature comforts then, by a Divine spirit, to tread upon the neck of these things, and to be caught up into third Heaven, bathing, solacing, and satisfying itself with sweet and higher enjoyments, with the more savory and cordial apprehensions it has of Jesus Christ. This is comparable to the one who is made a partaker of the Divine nature, and who lives above the world in the enjoyment of the world.

So now, reader, you have these sermons twice printed: once in the practice of this holy man and once again in these papers which we present to you in this preaching style (though we confess things might have been more contracted) because we find this more desired, more acceptable to his hearers and, if we mistake not, more working upon the affections and more profitable to the greatest number of Christians.

The Lord Jesus be with your spirit, and go along with these, and all his other precious labors, to the furtherance of the joy of your faith, building you up in the inner man, and directing you in the way to your eternal rest.

Chapter One: Doctrine: There is a great difference between a wicked man and a godly man. The one minds the earth; the other’s conversation is in heaven

Chapter Five: Five Things may be Wrought in an Earthly-Minded Man

Chapter Seven: Eleven Considerations to Take the Hearts of Men off of Earthly-Mindedness

Chapter Eight: Five Directions How to Get Our Hearts Free From Earthly-Mindedness

The Book of Revelation: How Difficult Was Its Journey into the Canon?
Michael J Kruger
Why Didn’t My Pastor Tell Me About That?
Michael J Kruger
The Death of Death and the Light of Eternity
Josh Buice
How Is Social Media Undermining the Mission of the Church?
Chris Gordon
The New Tower of Babel
Chris Martin
How to Stay When the World Says Leave
John Stonestreet
What Is Critical Race Theory?
Samuel Sey
American Evangelicalism's Toleration of Heresy
Keith Mathison
O Church, Arise (YouTube Series)
David Strain, Joel R Beeke, Jason Helopoulos, Jon Payne, Dr Harry L Reeder III, Kevin DeYoung
Voddie Baucham and the Dangers of Critical Race Theory
Peter Jones
What Divine Generation Is Not
Matthew Barrett
Death in the City
Sharon James
Why We Need the ‘Plurality Principle’
Sam Storms
What is Reformed Preaching?
Curated Resources
The Suicide of the Church & the West
Curated Resources
The God of Scripture and the God of the Philosophers
Craig Carter
Hope Beyond Heaven and Justice Now
Curated Resources
The Monster Is in the Classroom Schools indoctrinate children as young as eight in race and gender essentialism.
Erika Sanzi
Questioning the Kingdom? – Part 2: Cultural Transformation
Alex Kocman
Questioning the Kingdom? – Part 1: Definitions
Alex Kocman
Why Reformed Christians Are Vulnerable to Social Justice
Samuel Sey
When the Abused Become Abusers
Ron Henzel
Yes I Am Wretched – And So Are You
Bill Muehlenberg
Biblical Compassion: Its Relation to Evangelism
Christopher Brown
Vermigli and SSA (7-Part series)
Christopher Brown
How Old Should ‘Elders’ Be?
David Mathis
Fossilised Preaching?
Mark Loughridge
Why Confessions Matter
William Boekestein
Abandon Your Beloved Sin
Robert Bolton
God's Light on Dark Clouds (eBook)
Theodore Cuyler
Augustine: The Triumph of Grace
Stephen J Nichols
Thoughts on Religious Experience (eBook)
A Refuge for the Guilty Soul
Nicholas T Batzig
A Heavenly Cordial (eBook)
Thomas Brooks
The Incomprehensibility of God Increases our Worship
Dr Sinclair B Ferguson
How many wills does God have?
R C Sproul
Don’t Search for Wisdom. Search for God.
Christopher Ash
Deacons and Their Essential Ministry in the Church
Matt Smethurst
Who Are You?: The biggest lie is message that you must define yourself
Jim Weidenaar
Charles Haddon Spurgeon and His Struggle with Depression
Simonetta Carr
Pastors, Fight Against Fear of Man by Fighting for the Fear of the Lord
David Cook
The Significance of Passover: Kingdom Feast (YouTube)
R C Sproul
Charles Spurgeon Sermon Playlist
C H Spurgeon
The Four Main Issues Regarding Hyper-Calvinism
Curt Daniel
Scientists Conclude: Human Origins Research Is a Big Mess
Evolution News
The Westminster Confession of Faith
Derek Thomas
The Incarnation
Derek Thomas
The Atonement (.pdf)
Derek Thomas
The Church
Derek Thomas
End Times
Derek Thomas