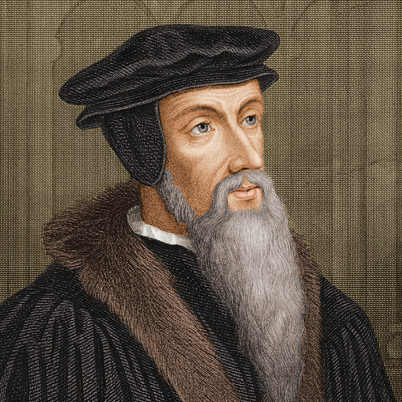 “When you hear that the gospel presents you Jesus Christ in whom all the promises and gifts of God have been accomplished; and when it declares that He was sent by the Father, has descended to the earth and spoken among men perfectly all that concerns our salvation, as it was foretold in the Law and to the Prophets — it ought to be most certain and obvious to you that the treasures of Paradise have been opened to you in the gospel and that the riches of God have been exhibited and eternal life itself revealed.

For, this is eternal life; to know one, only true God, and Jesus Christ whom he has sent, whom He has established as the beginning, the middle, and the end of our salvation.

Christ is Isaac, the beloved Son of the Father who was offered as a sacrifice, but nevertheless did not succumb to the power of death. He is Jacob the watchful shepherd, who has such great care for the sheep which He guards.

He is the good and compassionate brother Joseph, who in His glory was not ashamed to acknowledge His brothers, however lowly and abject their condition. He is the great sacrificer and bishop Melchizedek, who has offered an eternal sacrifice once for all.

He is the sovereign lawgiver Moses, writing His law on the tables of our hearts by His Spirit. He is the faithful captain and guide Joshua, to lead us to the Promised Land.

He is the victorious and noble king David, bringing by His hand all rebellious power to subjection. He is the magnificent and triumphant king Solomon, governing His kingdom in peace and prosperity. He is the strong and powerful Samson, who by His death has overwhelmed all His enemies.

It follows that every good thing we could think or desire is to be found in this same Jesus Christ alone. For, He was sold, to buy us back; captive, to deliver us; condemned, to absolve us; He was made a curse for our blessing, sin offering for our righteousness; marred that we may be made fair; He died for Our life; so that by Him fury is made gentle, wrath appeased, darkness turned into light, fear reassured, despisal despised, debt canceled, labor lightened, sadness made merry, misfortune made fortunate, difficulty easy, disorder ordered, division united, ignominy ennobled, rebellion subjected, intimidation intimidated, ambush uncovered, assaults assailed, force forced back, combat combated, war warred against, vengeance avenged, torment tormented, damnation damned, the abyss sunk into the abyss, hell transfixed, death dead, mortality made immortal.

In short, mercy has swallowed up all misery, and goodness all misfortune. For all these things which were to be the weapons of the devil in his battle against us, and the sting of death to pierce us, are turned for us into exercises which we can turn to our profit. If we are able to boast with the apostle, saying, O hell, where is thy victory? O death, where is thy sting? it is because by the Spirit of Christ promised to the elect, we live no longer, but Christ lives in us.

And we are by the same Spirit seated among those who are in heaven, so that for us the world is no more, even while our conversation is in it; but we are content in all things, whether country, place, condition, clothing, meat, and all such things. And we are comforted in tribulation, joyful in sorrow, glorying under vituperation, abounding in poverty, warmed in our nakedness, patient amongst evils, living in death.

This is what we should in short seek in the whole of Scripture: truly to know Jesus Christ, and the infinite riches that are comprised in Him and are offered to us by Him from God the Father. If one were to sift thoroughly the Law and the Prophets, he would not find a single word which would not draw and bring us to Him.

And for a fact, since all the treasures of wisdom and understanding are hidden in Him, there is not the least question of having, or turning toward, another goal; not unless we would deliberately turn aside from the light of truth, to lose ourselves in the darkness of lies.

Therefore, rightly does Saint Paul say in another passage that he would know nothing except Jesus Christ, and Him crucified. And such knowledge although mean and contemptible to the mind of the flesh is nevertheless sufficient to occupy us all our lives. And we shall not waste our time if we employ all our study and apply all our understanding to profit from it.

What more would we ask for, as spiritual doctrine for our souls, than to know God, to be converted to Him, and to have His glorious image imprinted in us, so that we may partake of His righteousness, to become heirs of His Kingdom and to possess it in the end in full? But the truth is that from the beginning God has given Himself, and at present gives Himself more fully, that we may contemplate Him in the face of His Christ.

It is therefore not lawful that we turn away and become diverted even in the smallest degree by this or that. On the contrary, our minds ought to come to a halt at the point where we learn in Scripture to know Jesus Christ and Him alone, so that we may be directly led by Him to the Father who contains in Himself all perfection.”

Where's Sola Scriptura In Scripture? - Luke 1:5-25
John Samson
Is Genesis Just One of the Many Creation Myths?
John Stonestreet
The Way to True Peace and Rest (eBook)
Robert Bruce
The Meaning Of Sola Scriptura - 2 Timothy 3:16-17 (MP3)
John Samson
How the Golden Chain Gives Us Missiological Confidence
Curated Resources
Put Not Your Trust in Princes -- An Exposition of Psalm 146
Kim Riddlebarger
Promises: God Hears Your Prayers
Zack Groff
The Regulative Principle and the Corporate Recitation of Creeds
Samuel G. Parkison
Seven Occasions for Fasting
Zack Groff
FBC Jax Speaks the Truth in Love about Sexuality
Denny Burk
Why We Reread the Bible
Ryan Higginbottom
Against Autonomy
T. M. Suffield
10 Practices to Kill Pride
Gavin Ortlund
Who Killed the Prayer Meeting?
Paul Miller
An Antidote to Spiritual Amnesia
Rev David P Murray
You’re a Pastor, Not a Therapist
Jeremy Pierre
What Christians Can Learn from Secular Humanism
John Stonestreet
A Nation of Biblical Illiterates
Thaddeus Williams
Calvin on the Authority of Scripture
Curated Resources
How Patient Is God With Us?
Nicholas T Batzig
The Classical Doctrine of God
James Dolezal, Dr Sinclair B Ferguson
What does the Bethel movement teach?
Costi Hinn
With Reverence and Awe (and Kids)
Curated Resources
We Live in Babylon, Not Israel
Marvin Olasky
What does it mean to present our bodies as a living sacrifice to God (Rom. 12:1)?
Dr Harry L Reeder III
What to do Before you Read the Bible
Curated Resources
The New Testament Explosion
Mitch Chase
The Megachurch Century
Shane Rosenthal
Keeping the Faith: Spurgeon and the Downgrade Controversy
Jason Allen
Jesus is God: Four Ways to See Jesus’s Divinity in John’s Gospel
David Schrock
Encore: Evangelicalism in 2020 and Beyond
Mark DeVine
The Heart of Faith (YouTube)
A Craig Troxel
When Were Christians First Regarded as Intolerant “Haters”?
Michael J Kruger
The Toughest Conversation I Don’t Regret
Mr Garrett Kell
Why I teach on Sovereign Election
John Samson
The Art of Observing What’s Not Said
Peter Krol
Three reasons to study church history
Aaron Armstrong
The Book of Job is About Asking the Wrong Question
Wyatt Graham
What the Church Needs Now
Bruce Little
How to Preach Parables
Leland Ryken
Painting Sin With Virtue Signals
Kendall Lankford
Diabolical Delusions Deceiving Many: Can the deception get any worse than this?
Bill Muehlenberg
Who Says? Solving Doctrinal Controversy
Matthew Barrett
Jesus Quests: Undeceptions
John Dickson
Perseverance in the Epistle to the Hebrews
Dr. Robert Cara
Beware the “Believe in Yourself” Gospel
Jen Oshman
The Age of Anxiety
Thaddeus Williams
1689 Stands for Unity: The Second London Confession of Faith
Sam Renihan
9 Proofs You’re More Than Matter
Thaddeus Williams
Holy Habits Forming the Will
Greg Gifford