The Training of the Twelve (eBook) 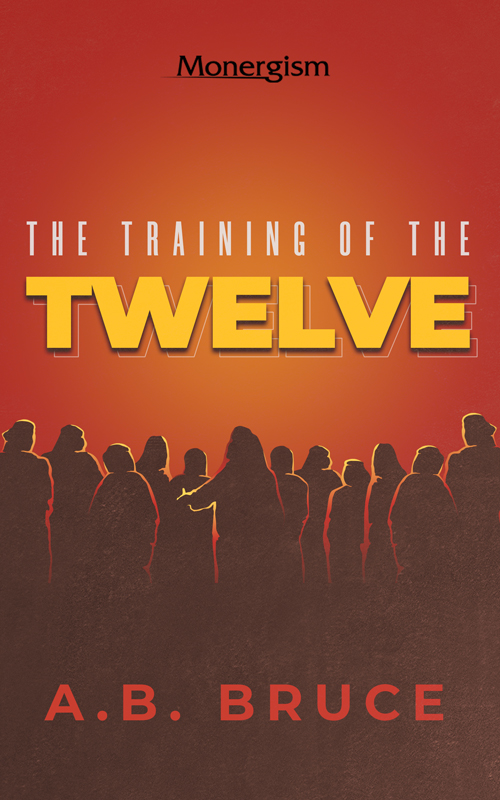 Alexander Balmain Bruce, a man as Scottish as his name, was born on a Perthshire farm and educated in an Edinburgh college. He ministered in Scottish country parishes and taught in a Glasgow seminary. For over forty years he devoted himself to the ministry of the Christian gospel, first as a pastor, and then as a distinguished Professor of Apologetics and New Testament Exegesis. He started writing during his pastorates and his best known book The Training of the Twelve was published in 1871. In keeping with the nineteenth century's love of ponderous and descriptive titles the book was subtitled, "Passages out of the Gospels Exhibiting the Twelve Disciples of Jesus Under Discipline for the Apostleship."

For over a hundred years The Training of the Twelve has been highly regarded and widely received. No less an authority than Dr. W. H. Griffith Thomas called the book, "One of the great Christian classics of the nineteenth century," and Dr. Wilbur Smith, America's number one evangelical bibliophile remarked "There is nothing quite as important on the life of our Lord as related to the training of the twelve apostles as this book. . . . "

Now, this "nineteenth century classic" can expand its already rich and blessed ministry. Although over one-hundred years old, Dr. Bruce's work speaks powerfully and effectively to the contemporary Christian generation.

In recent years there has been a re-discovery of the importance of Paul's teaching in Ephesians chapter 4] concerning the pastor/teacher's responsibility to "equip the saints for the work of the ministry." Many churches for long years had been ignorant of, or chose to ignore such biblical teaching, and, accordingly, a few of God's people were over-worked while the majority were under-employed. While a handful of gifts were exercised to the full, thousands of gifted people did not even know they were gifted. As a result, the potential ministry of the Church of Christ was drastically curtailed. Dr. Bruce would have felt right at home with the present emphasis on training people to minister, and his book has much to offer as a resource for such training as it shows the Master training His special team.

Seeing the church as the Body of Christ is another healthy contemporary emphasis. It serves to deliver people from the mistaken idea that the church is something people attend and introduces them to the biblical concept that the church is something people are. For Christians to see themselves as the Body of Christ and to order their lives in loving response to each other as fellow members, committed to mutual nurture, is potentially revolutionary. This book carefully documents the struggles and the successes of the first group of people who endeavored so to love each other that they became recognizable as Christ's disciples.

Much has been written recently about personal Christian growth. Some of the material leans more heavily on social sciences than theological or biblical teaching and savors more of self-improvement than spiritual growth. Dr. Bruce's work will greatly benefit many modern readers because his studies carefully examine how the disciples grew as a result of their relationship with the Master. The contemporary church needs to remember that the invaluable information gleaned from the social scientist about human behavior must never be seen as a substitute for a personal relationship with the living Lord Jesus similar to that enjoyed by the twelve as they walked the highways and byways together. How they heard His word, studied His reactions, fulfilled His commands and repsonded to His promises is faithfully recorded for us in Scripture and beautifully applied to our situations in this book.

Personally, I have found The Training of the Twelve of immense value for reasons other than those listed above. When preaching through the Gospels I have constantly referred to this book and found it to be an excellent commentary. In addition, I have often sat down and read chapters for no other reason than I needed the nourishment that comes to me only from the devotional application of Scripture to my own soul. Few expositors have done more for me than A. B. Bruce in this regard.

Perhaps the best recommendation that I can give the book, however, is to tell you that although I have many hundreds of books in my growing library, all carefully cataloged and filed, shelved and ordered, I have just realized that The Training of the Twelve has never been officially included in my library! The reason is simple. Ever since I purchased my copy, years ago, it has stayed either on my desk or at my elbow with a handful of other books which I need to refer to constantly. I just haven't been able to part with it long enough to let my secretary put it in its proper place! On second thought, it is in its proper place right where I can get hold of it quickly. I hope your copy will find such a place in your life and experience.

PREFACE TO THE SECOND EDITION

7. LESSONS IN RELIGIOUS LIBERTY; OR, THE NATURE OF TRUE HOLINESS

SECTION I. THE MISSION

SECTION I. THE MIRACLE

10. THE LEAVEN OF THE PHARISEES AND SADDUCES

12. FIRST LESSON ON THE CROSS

14. TRAINING IN TEMPER; OR, DISCOURSE ON HUMILITY

SECTION I. AS THIS LITTLE CHILD

SECTION IV. THE TEMPLE TAX: AN ILLUSTRATION OF THE SERMON

16. IN PEREA; OR, THE DOCTRINE OF SELF SACRIFICE

SECTION I. COUNSELS OF PERFECTION

SECTION II. THE REWARDS OF SELF-SACRIFICE

SECTION III. THE FIRST LAST, AND THE LAST FIRST

17. THE SONS OF ZEBEDEE AGAIN; OR, SECOND LESSON ON THE DOCTRINE OF THE CROSS

18. THE ANOINTING IN BETHANY; OR, THIRD LESSON ON THE DOCTRINE OF THE CROSS

19. FIRSTFRUITS OF THE GENTILES

20. O JERUSALEM, JERUSALEM! OR, DISCOURSE ON THE LAST THINGS

21. THE MASTER SERVING; OR, ANOTHER LESSON IN HUMILITY

SECTION I. THE WASHING

22. IN MEMORIAM; OR, FOURTH LESSON ON THE DOCTRINE OF THE CROSS

24. THE DYING PARENT AND THE LITTLE ONES

SECTION I. WORDS OF COMFORT AND COUNSEL TO THE SORROWING CHILDREN

SECTION II. THE CHILDREN'S QUESTION, AND THE ADIEU

25. DYING CHARGE TO THE FUTURE APOSTLES

SECTION I. THE VINE AND ITS BRANCHES

SECTION III. THE LITTLE WHILE, AND THE END OF THE DISCOURSE

SECTION I. "ALL THE DISCIPLES FORSOOK HIM, AND FLED."

SECTION I. TOO GOOD NEWS TO BE TRUE

SECTION II. THE EYES OF THE DISCIPLES OPENED

SECTION III. THE DOUBT OF THOMAS