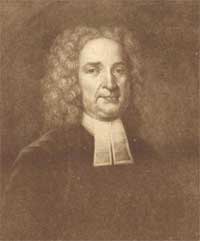 The Reverend John Cotton (December 4, 1585 – December 23, 1652) was a highly regarded principal among the New England Puritan ministers, who also included John Winthrop, Thomas Hooker, Increase Mather (who became his son-in-law), John Davenport, and Thomas Shepard. He was the grandfather of Cotton Mather, who was named after him.

Born in England, he was educated at Derby School, in buildings which are now the Derby Heritage Centre, and attended Cambridge University, where he also taught, and became a long-serving minister in the English town of Boston, Lincolnshire before his Puritanism and criticism of hierarchy drew the hostile attention of Church of England authorities. In 1633, William Laud was appointed Archbishop of Canterbury, and like numerous other Puritan nonconformist figures, Cotton soon came under his close "eye of scrutiny". In the same year Cotton, his family, and a few local followers sailed for the Massachusetts Bay Colony.

The Brownist congregational movement within the Church of England had by this stage, in effect at least, become a separate church. Because of his early views on the primacy of congregational government, his was an important role in Puritan aspirations to become the "city on a hill" which might help reform the English church. He is best known among other things for his initial defense of Anne Hutchinson early in her trials during the Antinomian crisis, during which she mentioned him with respect, though he turned strongly against her with the further course of the trial. He is also remembered for his role in the banishment of Roger Williams regarding the role of democracy and the separation of church and state in the Puritan theonomic society, both of which Williams tended to advocate. Cotton grew still more conservative in his views with the years but always retained the estimation of his community.

He was invited to attend the Westminster Assembly of Divines. He was keen to attend, though Winthrop said that he couldn't see the point of "travelling 3,000 miles to agree with three men?"[1] Cotton's desire to attend changed with the events leading up to the English Civil War with the split between the King and Parliament. Cotton believed that he could be more effective in influencing the Assembly through his writings.[2]
Cotton's written legacy includes a body of correspondence, numerous sermons, a catechism, and in 1646 a shorter catechism for children titled Milk for Babes,[3] which is considered the first children's book by an American and was incorporated into The New England Primer around 1701 and remained a component of that work for over 150 years. His most famous sermon is probably Gods Promise to His Plantation (1630), preached at the departure of John Winthrop's fleet for New England.