Bondage of the Will
by Martin Luther

The Sermons of Luther
(7 Volume Set)

Martin Luther: A Guided Tour of His Life and Thought
by Stephen J. Nichols 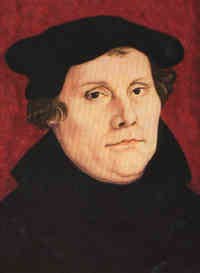 "God has surely promised His grace to the humbled, that is, to those who mourn over and despair of themselves. But a man cannot be thoroughly humbled till he realizes that his salvation is utterly beyond his own powers, counsels, efforts, will and works, and depends, absolutely on the will, counsel, pleasure and works of Another - God alone. As long as he is persuaded that he can make even the smallest contribution to his salvation, he remains self-confident and does not utterly despair of himself, and so is not humbled before God." (Martin Luther)

Martin Luther was born in 1483 into a strict German Catholic family. His parents intended him for a law career, but he became a monk and a theology professor instead. A sensitive soul, he struggled mightily with a guilty conscience and an intense fear of God and hell until he realized the doctrine of "justification by faith" while studying the book of Romans. This doctrine, his Augustinian understanding of the bondage of the will along with his conviction that the Bible should be the basis of religious life and available to all, became the theological foundation of Protestantism.

"As Luther grew in understanding, he had come to detest scholasticism as a betrayal of the biblical message. He violently opposed the way that the schoolmen had blended Christianity with the philosophy of Aristotle. He had also, by this time, rejected the neo-Pelagian teachings of William and Ockham and Gabriel Biel about salvation, and followed Staupitz in becoming a disciple of Augustine of Hippo; from now to the end of his life, Luther was to be a whole-hearted believer in Augustine's doctrine of the sovereign grace of God who chooses helpless sinners for salvation by His unmerited mercy. This was the first of Luther's two great spiritual breakthroughs, and it occurred around 1513 ...(what fully developed Protestant theology would call "regeneration" and "sanctification")...Luther's second great breakthrough was when he came to understand faith as essentially personal trust in Christ rather than assent to the Church's teachings, and the 'righteousness of God' as God's imputation of Christ's righteousness to the believer's account, changing the believer's legal status before God but not the believer's heart (justification in the sense in which Evangelical theology uses the term). This second breakthrough did not happen till much later, probably in the period 1518-19."
excerpt 2000 Years of Christ's Power Part Three: Renaissance and Reformation pg 70