Till He Come: 21 Sermons on the Lord's Supper (eBook) 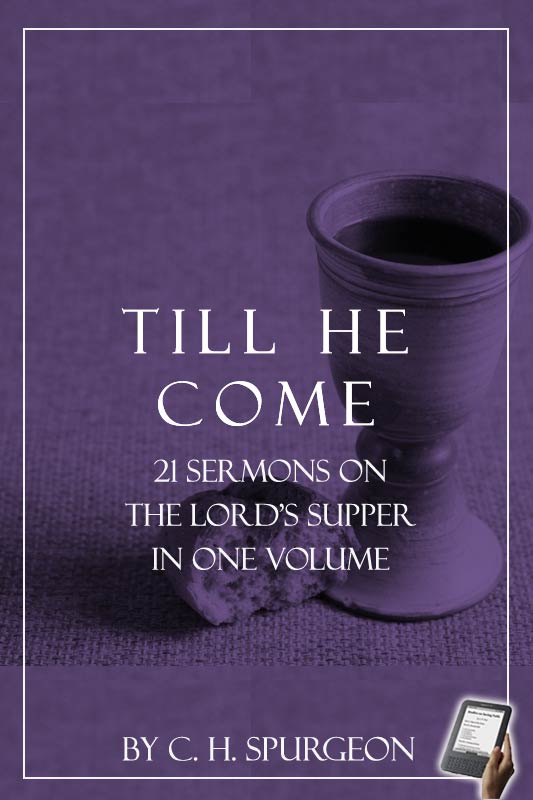 For many years, whether at home or abroad, it was Mr. Spurgeon's constant custom to observe the ordinance of the Lord's supper every Sabbath-day, unless illness prevented. This he believed to be in accordance with apostolic precedent; and it was his oft-repeated testimony that the more frequently he obeyed his Lord's command, "This do in remembrance of Me," the more precious did his Saviour become to him, while the memorial celebration itself proved increasingly helpful and instructive as the years rolled by.

Several of the discourses here published were delivered to thousands of communicants in the Metropolitan Tabernacle, while others were addressed to the little companies of Christians,--of different denominations, and of various nationalities,--who gathered around the communion table in Mr. Spurgeon's sitting-room at Mentone. The addresses cover a wide range of subjects; but all of them speak more or less fully of the great atoning sacrifice of which the broken bread and the filled cup are the simple yet significant symbols.

Mr. Spurgeon's had intended to publish a selection of his Communion Addresses; so this volume may be regarded as another of the precious literary legacies bequeathed by him to his brethren and sisters in Christ who have yet to tarry a while here below. It is hoped that these sermonettes will be the means of deepening the spiritual life of many believers, and that they will suggest suitable themes for meditation and discourse to those who have the privilege and responsibility of presiding at the ordinance. 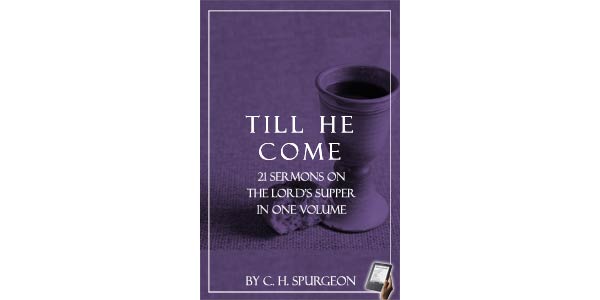 "He that dwelleth in the secret place of the most High shall abide under the shadow of the Almighty " -Psalm 91:1

"As the apple tree among the trees of the wood, so is my Beloved among the sons. I sat down under His shadow with great delight, and His fruit was sweet to my taste:" -Song of Solomon 2:3

"Because Thou hast been my help, therefore in the shadow of Thy wings will I rejoice." -Psalm 63:7

"And He hath made my mouth like a sharp sword; in the shadow of His hand hath He hid me, and made me a polished shaft; in His quiver hath He hid me."--Isa. 49:2

3. Under The Apple Tree

"I sat down under His shadow with great delight, and His fruit was sweet to my taste." -Song of Solomon 2:3

"My Beloved is mine, and I am His: He feedeth among the lilies. Until the day break, and the shadows flee away, turn, my Beloved, and be Thou like a roe or a young hart upon the mountains of Bether." -Song of Solomon 2:16, 17

5. Fragrant Spices from the Mountains of Myrrh

7. The Spiced Wine of my Pomegranate

"I would cause Thee to drink of spiced wine of the juice of my pomegranate." -Song of Solomon 8:2

"And of His fulness have all we received, and grace for grace," -John 1:16

"My Well-beloved hath a vineyard in a very fruitful hill." -Isaiah 5:1

10. Jesus, The Great Object of Astonishment

"Behold, My Servant shall deal prudently, He shall be exalted and extolled, and be very high. As many were astonied at Thee; His visage was so marred more than any man, and His form more than the sons of men: so shall He sprinkle many nations, the kings shall shut their mouths at Him: for that which had not been told them shall they see; and that which they had not heard shall they consider." -Isaiah 52:13-15

11.Bands of Love; or, Union to Christ

"I drew them with cords of a man, with bands of love: and I was to them as they that take off the yoke on their jaws, and I laid meat unto them." -Hosea 11:4

"And when they had sung an hymn, they went out into the mount of Olives."--Matthew 26:30

14. Jesus Asleep On A Pillow

"And He was in the hinder part of the ship, asleep on a pillow: and they awake Him, and say unto Him, Master, carest Thou not that we perish? And He arose, and rebuked the wind, and said unto the sea, Peace, be still. And the wind ceased, and there was a great calm." -Mark 4:38, 39

"And Jesus said, Somebody hath touched Me: for I perceive that virtue is gone out of Me." -Luke 8:46

17. A Word from the Beloved's Own Mouth

18. The Believer Not an Orphan

19. Communion with Christ and His People

"Who His own self bare our sins in His own body on the tree, that we, being dead to sins, should live unto righteousness: by whose stripes ye were healed. For ye were as sheep going astray; but are now returned unto the Shepherd and Bishop of your souls." -1st Peter 2:24, 25

21. Swooning and Reviving at Christ's Feet

"And when I saw Him, I fell at His feet as dead. And He laid His right hand upon me, saying unto me, Fear not; I am the first and the last: I am He that liveth, and was dead; and, behold, I am alive for evermore, Amen: and have the keys of hell and of death."--Revelation 1:17, 18

Gender Dysphoria and Adverse Childhood Experiences
Walt Heyer
Screaming in the Face of Death
Zack Groff
Why I got out of Twitter
Ray Ortlund
Why Pro-Abortion Activists Desecrate Churches
Carl Trueman
Israel's Hope Encouraged (eBook)
John Bunyan
When Food Leads to Idolatry
Ken Montgomery
Practical Sermons To Be Read in Families and Social Meetings (eBook)
Archibald Alexander
A Discourse of the Object of Faith
Stephen Charnock
Taking Unpopular Stands in a Strange New World
John Stonestreet
Lessons from mainline decline
Kevin DeYoung
The Psychology of Manipulation: 6 Lessons from the Master of Propaganda
Curated Resources
My Slave, My Choice
Nathan Eshelman
The Lost Art of Courage
Keith A. Evans
Tim Keller & Myxomatosis Christians
Rod Dreher
Theology for the People (eBook)
William S Plumer
Sermons on the Most Interesting Doctrines of the Gospel (eBook)
Martin Luther
One People or Two? The Challenge Raised to Dispensationalism by Ephesians 2:11-22
Kim Riddlebarger
Christians Need the Gospel Too
Derek Thomas
Omniscience
D. Blair Smith
Omnipresence
Gerald Bray
Impassibility
Samuel Renihan
Pray at Set Times to Pray All the Time
Rev David P Murray
Omnipotence
Carlton Wynne
Love, Justice, and Wrath
Terry Johnson
Immutability
Robert Letham
Aseity and Simplicity
James Dolezal
Dispelling Unbelief
Andrew Kerr
Who is Really in Control?
Bill Muehlenberg
Be careful not to allow ‘transgender’ news stories to accustom you to their lunacy
Jonathon Van Maren
The Heavenly Footman: A Description of the Man Who Gets Into Heaven (eBook)
John Bunyan
How to Become a Dangerous Person in Today’s Culture
Randy Alcorn
39 Major ProChoice Arguments and Their Refutations
Randy Alcorn
9 Myths about Abortion Rights and Roe v. Wade
Kevin DeYoung
Let’s Isolate our Differences, Explain our Views, and Persuade our Brothers
David Strain
Of the Law and a Christian
John Bunyan
Secret Prayer Successfully Managed (eBook)
Samuel Lee
What Cessationism Is Not
Nathan Busenitz
Escape from Kabul
Sarah Eekhoff Zylstra
3 reasons Christians slander one another
Aaron Armstrong
What Does Scriptural Sufficiency Mean?
Jordan L. Steffaniak
6 Common Misconceptions About Calvinism
Jack Lee
The Angel at Bethesda
Grover Gunn
Through Your Commandments, You Have Made Me Wiser Than My Enemies
Thomas Manton
A Survey of the Summe of Church-Discipline (eBook)
Thomas Hooker
Amillennialism at Princeton
Kim Riddlebarger
The Vanity of this Mortal Life (eBook)
John Howe
The Militant and Triumphant Church
Voddie Baucham, Tom Ascol, Conrad Mbewe
The Lamb Has Triumphed
Conrad Mbewe
The Politically Incorrect Guide To God's War On The Wicked
Voddie Baucham
The Strength Of Our Confession
Voddie Baucham