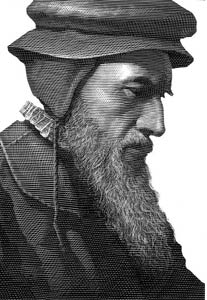 The second petition is: that God’s Kingdom come [Matt. 6:10]. Even though it contains nothing new, it is with good reason kept separate from the first petition; for if we consider our languor in the greatest matters of all, it behooves us to extend our discussion in order to drive home something that ought to have been thoroughly known of itself. Therefore, after we have been bidden to ask God to subject and finally completely destroy everything that casts a stain upon his holy name, there is now added another similar and almost identical entreaty: that “his Kingdom come” [Matt. 6:10].

But even though the definition of this Kingdom was put before us previously, I now briefly repeat it: God reigns where men, both by denial of themselves and by contempt of the world and of earthly life, pledge themselves to his righteousness in order to aspire to a heavenly life. Thus there are two parts to this Kingdom: first, that God by the power of his Spirit correct all the desires of the flesh which by squadrons war against him; second, that he shape all our thoughts in obedience to his rule.

Therefore, no others keep a lawful order in this petition but those who begin with themselves, that is, to be cleansed of all corruptions that disturb the peaceful state of God’s Kingdom and sully its purity. Now, because the word of God is like a royal scepter, we are bidden here to entreat him to bring all men’s minds and hearts into voluntary obedience to it. This happens when he manifests the working of his word through the secret inspiration of his Spirit in order that it may stand forth in the degree of honor that it deserves. Afterward we should descend to the impious, who stubbornly and with desperate madness resist his authority. Therefore God sets up his Kingdom by humbling the whole world, but in different ways. For he tames the wantonness of some, breaks the untamable pride of others. We must daily desire that God gather churches unto himself from all parts of the earth; that he spread and increase them in number; that he adorn them with gifts; that he establish a lawful order among them; on the other hand, that he cast down all enemies of pure teaching and religion; that he scatter their counsels and crush their efforts. From this it appears that zeal for daily progress is not enjoined upon us in vain, for it never goes so well with human affairs that the filthiness of vices is shaken and washed away, and full integrity flowers and grows. But its fullness is delayed to the final coming of Christ when, as Paul teaches, “God will be all in all” [1 Cor. 15:28].

Thus this prayer ought to draw us back from worldly corruptions, which so separate us from God that his Kingdom does not thrive within us. At the same time it ought to kindle zeal for mortification of the flesh; finally, it ought to instruct us in bearing the cross. For it is in this way that God wills to spread his Kingdom. But we should not take it ill that the outward man is in decay, provided the inner man is renewed [2 Cor. 4:16]! For this is the condition of God’s Kingdom: that while we submit to his righteousness, he makes us sharers in his glory. This comes to pass when, with ever-increasing splendor, he displays his light and truth, by which the darkness and falsehoods of Satan’s kingdom vanish, are extinguished, and pass away. Meanwhile, he protects his own, guides them by the help of his Spirit into uprightness, and strengthens them to perseverance. But he overthrows the wicked conspiracies of enemies, unravels their stratagems and deceits, opposes their malice, represses their obstinacy, until at last he slays Antichrist with the Spirit of his mouth, and destroys all ungodliness by the brightness of his coming [2 Thess. 2:8].