Thoughts on Preaching: Being Contributions to Homiletics (eBook) 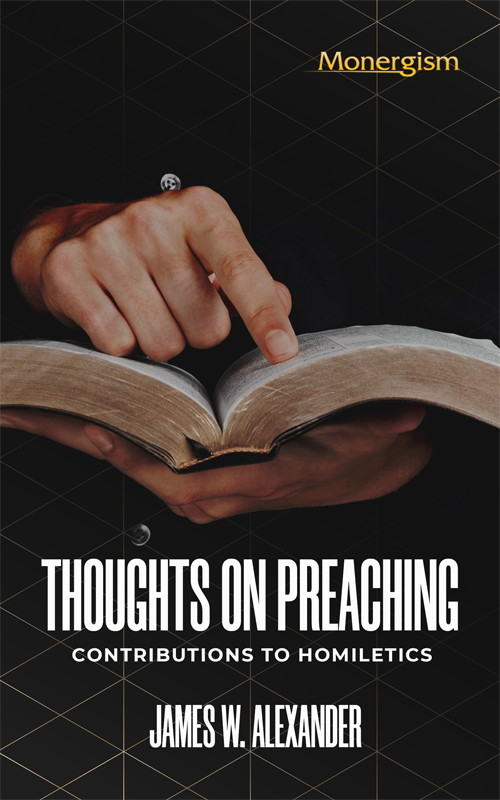 J. W. Alexander was son of Archibald Alexander and this book is a great thought provoker - the only thing that I think would keep it from being very popular is that the first part is a great deal of random thoughts on various topics. It might be difficult to methodically plod through it so on the section called HOMILETICAL PARAGRAPHS I have created an index of subjects to, hopefully, make it more useful.

IT had long been the cherished wish of Dr Alexander to prepare a volume on Homiletics, for the use of young ministers and students; and with this object in view, he was in the habit of jotting down, in his private journals, in the form of paragraphs, such thoughts as occurred to him on the subject. In one of his later journals I find the following entry: "If the Lord should spare me below, it will be well for me some day to look over all my dailies, and collect what I have written from time to time on Ministerial Work. It is already enough for a volume. It might do good when I am gone." But death defeated his plans.

To carry out his purpose as far as it is now possible, I have collected these paragraphs, and print them just as they occur in his journals, without any attempt to arrange them in the order of subjects. I have also added to them several articles on the same subject, contributed by him to the Princeton Review, and a series of letters to young ministers, published in the Presbyterian, thus giving to the public, in a permanent form, all that he has written upon these important topics. In addition to these I have introduced some paragraphs on miscellaneous subjects from the same journals, most of them bearing upon ministerial life and experience. Although deeply sensible of the inadequacy of this work to convey fully the matured experience of the author, I am not prepared to withhold its publication; believing that incomplete as it is, it may yet be of advantage to all who are looking forward to the sacred office.

In such a collection there must necessarily be some repetition of thoughts, and some opinions which were afterwards modified by the author; but I have concluded to give the whole as it stands, rather than attempt an elimination which might weaken rather than give strength to the subject.

-- LETTER I: Devotion to the Work of the Ministry

-- LETTER V: How to find time for Learning

STUDIES AND DISCIPLINE OF THE PREACHER

THE MATTER OF PREACHING

THE PULPIT IN ANCIENT AND MODERN TIMES

ELOQUENCE OF THE FRENCH PULPIT

Don’t Sacrifice Your Children
Paul Liberati
How Ordinary Worship Is both Reverent and Relevant
Curated Resources
Samuel Miller on the “Sanctified Judgment” of the Enlarged, Elevated, and Strengthened Mind: Piety, Learning, and the Right Kind of Bias
Paul Kjoss Helseth
5 New Stats You Should Know About Teens and Social Media
Chris Martin
Truths We Must Defend: Lessons from China
Luke Wesley
A Token of the Righteous Judgment of God (eBook)
Thomas Manton
The Seven Deadly Sins And the Seven Cardinal Virtues (eBook)
James Stalker
Gender Dysphoria and the Body-Soul Relationship
Edmund Fong
Rejecting Syncretism: Paul and the Python
Curated Resources
Romans 8: Emancipated!
Stephen Unthank
God is a se
Stephen Unthank
No Civilization Without Restraint: Wise Words From 1939
John Stonestreet
Christ’s Crucifixion Isn’t Child Sacrifice
Alan Shlemon
What Is Fornication?
Aaron L. Garriott
Kinsman Redeemer
Quentin B. Falkena
Mutilating Our Bodies
Bethel McGrew
Complementarianism, the Regulative principle Holding for all of Life & How We Undermine our own Principle
Stephen Kneale
Not Now: The Surprising Joy of Waiting on the Lord
Lee Hutchings
“Luxury Beliefs”
John Stonestreet
Getting to the End: Finding Faith in the Eternal Promises of God
Benjamin Glaser
How Should Pastors Answer the Question, Is Christianity Good?
Dane C Ortlund
How to Forgive
John Beeson
Vocation and the Christian
Gene Veith
The Importance of a Plurality of Elders
Michael Brown
Breaking Our Addiction to Gossip
John Sartelle
Salt
Rhett Dodson
Eagles’ Wings
Aaron Messner
Sheol
Bryan D Estelle Ph.D
Zion
Matthew Patton
Lord of Hosts
William Boekestein
High Places
Andrew Compton
Hyssop
Michael Barrett
The Doctrine of Justification by Faith
Dr. Martyn Lloyd-Jones
The Authority of Scripture
R C Sproul
How Do We Know What We Know?
R C Sproul
I will tell you plainly about the Father - John 16:25-33
J C Ryle
Bible Verses Have Consequences
George Gillespie
The Lord is My Salvation
Alistair Begg
What Is the Gospel?
Alistair Begg
What Is Unconditional Election?
Nicholas T Batzig
Scotland’s Forgotten Reformation (4-Part Video Series)
Curated Resources
Recovering the Reformed Confession on Resistance
Gregory Baus
Tips for Extemporaneous Preaching from J.W. Alexander
Curated Resources
Jesus Came to Save the World
Curated Resources
You are Welcome to Have Your Faith - As Long as You Don't Believe it.
Bill Muehlenberg
On Legalism and Licence
Bill Muehlenberg
On Statism, Censorship and Free Speech
Bill Muehlenberg
We Must Never Forget: Communism Kills
Bill Muehlenberg
If You Don’t Give Them Jesus Then What’s the Point?
Stephen Kneale
Sin is Only as Hidden as God Allows
Doug Eaton