A String of Pearls: The Best Things Reserved Until Last (eBook) 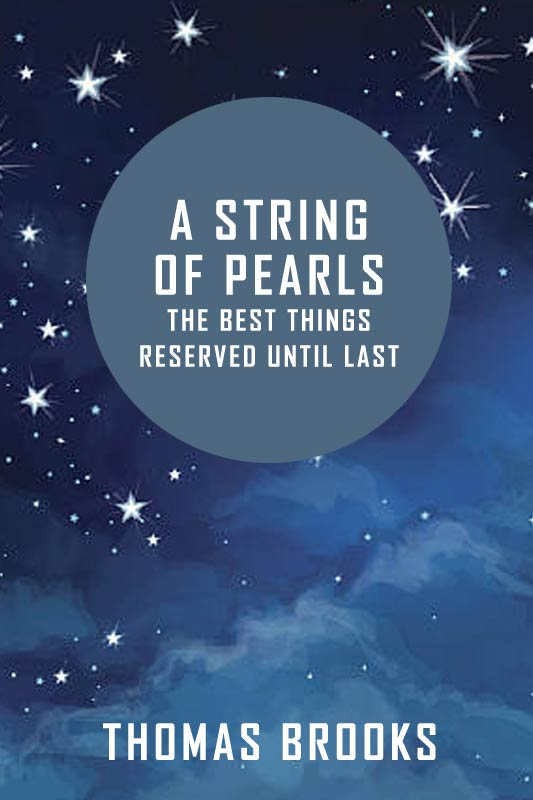 Thomas Brooks starts with the doctrine-telling us what his sermon is about. That God reserves the best and greatest favors and blessings for believers till they come to heaven". The highest blessings of God are ours-but they haven't been given to us yet. They're ours by promise and the promise cannot fail. We have pinches of them in this life, but that's all we have-pinches, traces, small fractions of them. This shows how magnificent heaven must be. To think that the forgiveness of sin is only a grain of sand in the beach of God's favor! What the Persian king said to Hamaan can be applied to the Lord and His favorites:"What shall be done for the man whom the king delights to honor?" There's no telling-for it is God doing the honors! What sort of heaven is God not able to make? He can make a heaven worthy of His majesty and His good will toward us. And that's precisely what He has done! We don't have our hands of it yet, but we have it in trust. And so, it is ours-without a doubt! We can be sure of it. For God has promised it to everyone who loves Him.

What is heaven? It is an inheritance. Peter calls it that-and rightly so, for it is a common theme in the Old Testament. Israel was God's son, and was meant to receive all the riches of heaven. The word tends to exclude every notion of earning your way to heaven. How do you earn your way into a family? You don't: you're born into it. It is God's decision, not yours.

Similarly, we do not work our way into God's family or earn a place in heaven. No, we are born into it-born again into it, the Bible says.

This can only make us laugh at our pride and thank the Lord that He put us into His family, and so, given us an inheritance.

This is Brook's big idea, but he goes on to develop it by telling us what kind of inheritance it is. He doesn't roam all over the Bible to do it, but simply names the words Peter uses.

IT IS A PURE INHERITANCE

"First, the inheritance reserved for believers till they come to heaven is a pure, undefiled, and incorruptible inheritance. It is an inheritance that cannot be defiled or blemished with abuse".

What we have from the Lord is pure in itself. The French novelist, Balzac, said, "Behind every great fortune there is a crime". This may not be totally true, but there's more truth in it than we care to admit. Many fortunes have been built on crime-or, if not on crime-then on sharp business practices, exploiting people, and so on.

But not ours! Ours is a legacy we'll never feel squeamish about having. It comes from a sinless God, the concentration of all goodness, and comes to us simply because He loves us.

The main thing Brooks has in mind here is that we cannot abuse the inheritance we have. What if a man compiled a massive fortune and did it with perfect honesty? And, what if he gave it to his son because he so loved the boy? And what if the son then took the millions and spent them all on.drugs or some other vice? The inheritance, itself, is good. But the heir abused it and what was given to bless him became a curse!

Is this possible with the believer's inheritance? No it isn't. Because part of the legacy is holiness. The Lord not only gives us streets paved with gold, but with also the grace to appreciate them and put them to good use!

What will the believer have when he leaves this world? He'll have a pure inheritance!

In the second place, he'll have.

"It is a sure, secure inheritance. The Greek word that is here rendered `reserved' signifies to keep carefully and under watch. This inheritance is secured for us by power, by blood, and by oath, and therefore, must be sure. It is neither sin nor world nor Satan that can separate a Christian from it".

Thomas Brooks is at his best here. We have an inheritance, in one way, but in another way, we don't have it. It is reserved for us, but we haven't gotten it yet. How do we know we will get it? He says we know for three reasons: power, blood, oath!

The power, of course, is God's power. He has the grip to hold on to our legacy and to keep us on the way to it. Now, if God is holding both it and us, who is going to separate us from what we have coming to us in Christ!

God is not the only power, of course: Satan has a malign power against us; so does the world; and even inside us there is a power at work to keep us from our reward. But what are these powers next to Omnipotency? They seem very strong to us-but that's like a any looking huge next to a gnat! Opposed to God Almighty power and resolve to use it, these things become the pathetic worms they are.

The blood is Christ's. It stands for His death in our place-covering our sins and satisfying the justice of God. What sin or guilt or temptation can stand up to that blood? Paul rejoices

"Who is he that condemns? It is Christ who died!"

If I died for you, you'd be sunk, for my death-at the most-can only postpone yours. But Christ's death can cancel the wages of sin for you. And does just that!

The oath is God's. He has promised that we won't fail to receive what Jesus Christ has won for us. What an act of humility! I don't make promises, swear oaths, and so on, because I want you to believe me without them. God cannot lie and His every word comes true-without exception. Yet His kindness is so great to us in our doubts and worries that He doesn't just say we won't be lost, but He promises, swears, and takes an oath to that effect!

How does the believer know he's going to heaven? Because he never sins? Because, when he does sin once in a while, he always repents that very minute and never does it again? No. Our inheritance is sure because it is backed up by the power, the promise and the blood of God!

"It is a permanent, lasting inheritance. It is an inheritance that continues as long as God continues. Though other legacies may be lasting, only this one is everlasting. Where is the glory of the Babylonian, the Persian, the Greek, and the Roman Empires? But the glory of believer shall never fade. His happiness shall be as fresh after being with the Lord for many thousands of thousands of years as when he first entered into it. It is a feast that is never consumed, a blessing which eternity bestows but eternity has no end. So this-all this-is the heritage of God's People".

Eternity is a word I cannot get my brain around. I can only think of it as what it is not. It is not ending, but it is also not boring or repetitious.

Everything in the world ends-even the oldest, sturdiest things will go to pieces in the end. But not our inheritance! The Byzantine Empire lasted from 473 to 1453, but then it fell to the Turks! What a run it had! For centuries no one could imagine it coming to an end, but it did. All things do. Except God and what He has promised us!

For the believer, death is the doorway out of death, change and decay and into life, permanency, and perfection getting better every minute!

What's the world coming to? It's coming to ruin. But what are God's people coming to? We're coming to heaven! Every believer is, including the believer who worries he isn't.

This is number three. Now, I've got to hurry.

"It is the freest inheritance, free of all vexation and molestation. There is no sin to vex the soul and no devil to molest the believer. Oh the debates, the disputes, the law-suits that attend earthly inheritances! But no encumbrances to our heavenly inheritance".

This is a sharp comment. Whenever a man dies, his heirs are sure to swoop down in his estate, like vultures on a dead rabbit. Greedy, selfish, covetous relatives pecking at what he left behind-fighting for his silver and suing each other for his home! A Greek once said that if he had the choice of going to hell or going to court, he would go to hell!

Inheritances are rarely free from the clamor and aggravations of the world. But what we have coming is free of all hassles and headaches.

There is no judge above God and what He wills to give us, He gives us and no one can dispute His will. Our inheritance is a free one, free from all worries and regrets.

"Fifthly, it is a universally communicable inheritance-to Jews and Gentiles, to bond and free, to rich to poor, to high to low, to male and female. To men, all children are not equal heirs, but all God's children are all heirs".

In the near-eastern world back in Bible days, a man's sons got his estate and his daughters did not. And, of the sons, the first-born got twice as much as the others. In some cases, sons (even the firstborn) would be cut out of the inheritance or get less than he expected. See Ishmael, Esau, and Ruben, for examples.

But God disinherits none of His children and gives both sexes and every age an equal share in His infinite happiness. In heaven King Solomon will have no more than Lazarus who lay at the rich man's gate. The man who trusted Christ five minutes before the Second Coming will have as much as Noah who bore the heat of the day for centuries.

"Lastly, it is a soul-satisfying inheritance. He who has it shall sit down and say, `I have enough. I have all.'"

This is so contrary to the riches that pass from father to son in this world. How many children have received much, only to resent what they didn't get? Even an only child (and a rich man's sole heir) might receive much, but find it surprisingly empty-not what he thought it would be.

But not so of the believer's inheritance! No one will wish for more; no one will find what God has given him less than he expected. No disappointment in heaven, but the opposite: new surprises of grace every day! Forever! 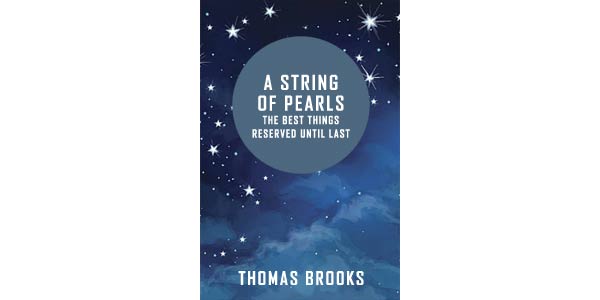 The Character of Mrs. Blake

The Best Things Reserved Until Last

The Perfection of Grace is Reserved for Glory

The Best Society, the Best Company, is Reserved Until Last

The Glorifying of Our Bodies is Reserved Until Last

Twenty Motives for Christians to be Willing to Die