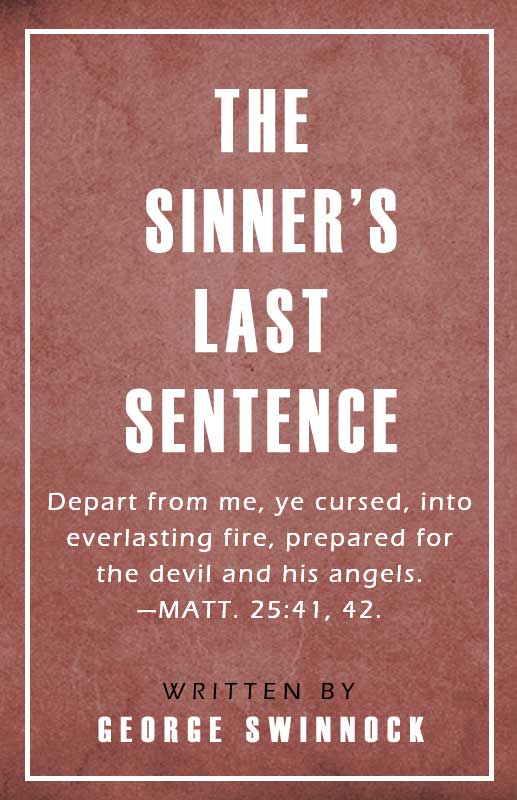 Then shall he say also unto them on the left hand, Depart from me, ye cursed, into everlasting fire, prepared for the devil and his angels: for I was an hungered, and ye gave me no meat: I was thirsty, and ye gave me no drink.—MAT. 25:41, 42.

A treatise on never-ceasing torments & the heinousness of sins of omission.

GOOD READER,—Being requested to recommend this treatise to thy acceptance, I readily complied with the motion, induced thereunto partly by my respect to the author, Mr Swinnock, a name well known to most serious Christians by his former savoury and useful works, published for the good of the church, before one of which I have expressed my just esteem of his gifts and graces in an epistle prefixed, and therefore commendation is not my business now, it needeth not but attestation; and to assure thee that this piece is his, delivered by his own hands to his son, a little before his, to him blessed, but, alas! to us untimely death, and accordingly thou wilt find the one spirit of the author in it, and the same holy, lively way of discoursing, which is so remarkable in his other writings, partly with respect to the matter, which is about the eternal recompenses, as they are represented by our Lord in a scheme or draught of the last judgment. We are hedged within the compass of our duty both on the right hand and on the left; on the right hand, with the hopes of a most blessed everlasting estate; on the left, with the fears of endless and never-ceasing torments. Reflections on the former are comfortable; what is sweeter than to live in the expectation and foresight of endless glory? But the consideration of the latter is also profitable. We need many sermons about hell, to keep us out of hell; therefore in this treatise the worthy author insisteth on the dreadful doom and sentence that shall pass on the wicked at the last day.

There is also another thing largely represented which is of great use, the heinousness of sins of omission. Sin in the general is a transgression of the law, 1 John 3:4. Now the law may be transgressed either by omitting what is commanded as a duty to God, or by committing what is forbidden when we directly transgress an affirmative precept, that is a sin of omission; but when we do anything against a negative precept, that is a sin of commission; in both there is disobedience, and so by consequence contempt of God's authorities. When Saul had not done what God bids him to do, he telleth him that rebellion is as a sin of witchcraft, and stubbornness as idolatry, 1 Sam. 15:13; implying that omission to be rebellion and stubbornness, for which God would rend the kingdom from him. So for a sin of omission he put by Eli's family from the priesthood, 1 Sam. 3:15: 'I will judge his house for ever, because his sons had made themselves vile, and he restrained them not.' Now the more necessary the duties omitted are, the greater is the sin, as Heb. 2:3, especially if the omission be total, Ps. 14:3; Jer. 2:32; or when the duty is most seasonable, Prov. 17:16; or the performance easy, for this is to stand with God for a trifle; he is denied a drop that would not give a crumb, Luke 16:24; or when we are fully convinced that it is our duty, James 4:17. Briefly, these sins of omission are the ruin of most people in the world; yea, the children of God oftener offend in these kind of sins than in fouler excesses. Oh, how many of them go out of the world bewailing their neglects and omissions. The best might have done much more for God than ever they have yet done. But I detain thee too long from the book itself; read and peruse it, and the Lord give thee understanding in all things.—I am,

Thine in all Christian observation,

I. The preface and introduction to the text

II. The division and brief explication of

III. Concerning the privative part of the sinner's punishment

IV. The properties of the sinner's loss

V. The reasons of the sinner's privative punishment

VI. Uses concerning the heinous nature of sin, and grievous misery of sinners

VII. Containing the folly of sinners, and the vast difference between them and the godly at the great day

VIII. A use of trial, with the marks of those that shall be banished Christ's presence

IX. An exhortation to fly from this wrath to come, with some helps thereunto

X. The positive part of the sinner's misery, expressed by fire, and why

XI. The difference between our fires and hell fires

XII. The fulness of wicked men's misery, in that it is positive and privative, with some cautions against it

XIII. The eternity of the sinner's misery in the other world, with the grand reason of it

XIV. How little cause to envy sinners, and how careful we should be to avoid their eternal misery

XV. The reason of Christ's severe sentence, and a question resolved, Whether the righteous, by their acts of charity, do not deserve heaven, as well as the wicked, by their omission thereof, deserve hell

XVI. Why Christ will try men at the great day by acts of charity

XVII. Three particulars about the text

XVIII. That sins of omission are dangerous and damnable

XIX. The nature of sins of omission in general

XXI. The agreement and difference between sins of omission and sins of commission

XXII. The danger of sins of omission, in the heinous nature of them, and their offensiveness to God

XXIII. The danger of sins of omission, in their destructiveness to man, and our proneness to overlook them

XXIV. The reasons why sins of omission are damnable

XXV. Further reasons why Christ at the great day will condemn men for sins of omission

XXVI. Of the doctrine by way of information, How dreadful will be the condition of those that live in sins of commission

XXVII. Negative godliness is not enough.—Christ's impartiality in judgment

XXIX. The condition of men only civil is unsafe and sad

XXXI. The holiest have cause of humiliation

XXXII. Use of trial, whether we be guilty of these omissions or no

XXXIII. A caution against sins of omission in regard of the matter of duties

XXXIV. Arguments against omissions. The positiveness of our rule, and of God's mercies

XXXV. Arguments against omissions. Christ purchased positive as well as negative holiness, and our privileges oblige to both

XXXVI. Arguments against omissions. We profess ourselves God's servants, and all our religion will come to nothing without positive holiness

XXXVII. Arguments against omissions. God deserves our positive obedience before all others, and true sanctification cannot be without it

XXXVIII. If God should omit his care of us a moment we are undone. And if Christ had omitted the least in our work of redemption, we had been lost irrecoverably

XXXIX. Arguments against sins of omission. The new nature in believers inclines them to positive as well as negative holiness, and the profit will answer the pains

XL. Arguments against sins of omission. God delights chiefly in our doing good; and our opportunities for doing good will quickly be gone

XLI. The grand cause of sins of omission, an unregenerate heart; with the cure of it, a renewed nature

XLII. Another cause of sins of omission, ignorance; with the cure of it, labouring after knowledge

XLIII. Another cause of sins of omission, idleness, with the cure of it

XLIV. Another cause of omissions is vain excuses men have, that omissions are little sins; with the cure of it

XLV. Another excuse for sins of omission, which is a cause of them, that they would be unseasonable, and so are deferred to that time which never comes; with the answer to it

XLVI. A third excuse for sins of omission, it is but one sin; with the answer to it

XLVII. A fifth cause of sins of omission, the example of others; with the cure of it