The Sin of Forgetfulness 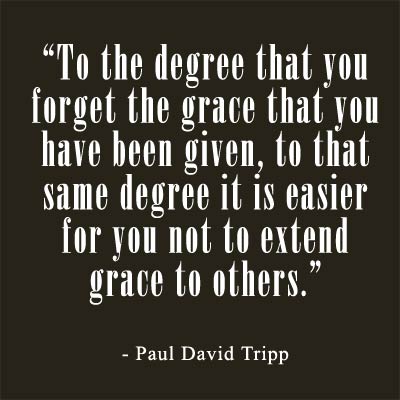 “Forgive us . . . as we also have forgiven . . .”(Matt. 6:12). I must always remember the grace I am daily given and extend that grace to the people in my life. It is really true that one of the greatest sins in our relationships is the sin of forgetfulness. Consider the following parable of Jesus:

Therefore the kingdom of heaven may be compared to a king who wished to settle accounts with his servants. When he began to settle, one was brought to him who owed him ten thousand talents. And since he could not pay, his master ordered him to be sold, with his wife and children and all that he had, and payment to be made. So the servant fell on his knees, imploring him, “Have patience with me, and I will pay you everything.”And out of pity for him, the master of that servant released him and forgave him the debt. But when that same servant went out, he found one of his fellow servants who owed him a hundred denarii, and seizing him, he began to choke him, saying, “Pay what you owe.”So his fellow servant fell down and pleaded with him, “Have patience with me, and I will pay you.”He refused and went and put him in prison until he should pay the debt. When his fellow servants saw what had taken place, they were greatly distressed, and they went and reported to their master all that had taken place. Then his master summoned him and said to him, “You wicked servant! I forgave you all that debt because you pleaded with me. And should not you have had mercy on your fellow servant, as I had mercy on you?”(Matt. 18:23–33)

We can all be so forgetful. We can all fail to remember the magnificence of the love and mercy that has been showered down on us. We can all forget that we never could have earned or deserved the best things in our lives; they are only ours by means of grace. Here’s the problem: to the degree that you forget the grace that you have been given, to that same degree it is easier for you not to extend grace to others. To the extent that you forget how much you’ve been forgiven, to that same extent it is easier for you not to forgive the people in your life. If you fail to carry around with you a heart of gratitude for the love you’ve been so freely given, it is easy for you not to love others as you should. It is and always has been true that no one gives grace better than a person who is deeply persuaded that he needs it himself and that it has been graciously supplied by a God of tender mercy. He gives what we never could have earned; why, then, do we turn and refuse to give until others have measured up to whatever standard we hold them to? The call to forgive immediately exposes our need for forgiveness. The call to give grace reveals how much we need grace. The call to forgive is at the very same time a call to remember and to be thankful. When you remember how far you fall short, you are tenderhearted toward others who fall short, and you want for them the same grace that is your only hope. May God give us the grace to remember and the willingness to give to others what we have been given.

For further study and encouragement: Ephesians 4:25–32