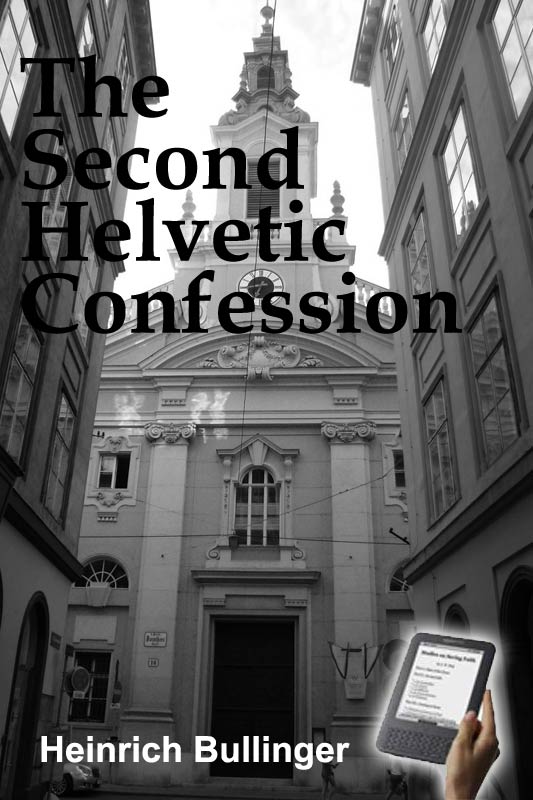 In ePub, .mobi and pdf formats

The word "Helvetic" is Latin for "Swiss." The setting of the Second Helvetic Confession is Swiss-German Reformed Protestantism.

The First Helvetic Confession of 1536 had been drawn up by Heinrich Bullinger, Martin Bucer, and Leo Jud for the German-speaking Swiss Cantons. It was an attempt to reconcile Lutheran and Zwinglian views before the spread of Calvinism. Thirty years later, commissioned by Friedrich III, Bullinger drew up a lengthier and more thoroughly Calvinistic confession. It became widely used among Swiss Reformed churches, as well as Reformed churches in Hungary, Poland, Scotland, and France.

The Second Helvetic Confession (Latin: Confessio Helvetica posterior) was written by Bullinger in 1562 and revised in 1564 as a private exercise. It came to the notice of Elector Palatine Frederick III, who had it translated into German and published. It gained a favorable hold on the Swiss churches, who had found the First Confession too short and too Lutheran. It was adopted by the Reformed Church not only throughout Switzerland but in Scotland (1566), Hungary (1567), France (1571), Poland (1578), and after the Westminster Confession of faith, the Scots Confession and the Heidelberg Catechism is the most generally recognized confession of the Reformed Church. The Second Helvetic Confession was also included in the United Presbyterian Church in the U.S.A.'s Book of Confessions, in 1967, and remains in the Book of Confessions adopted by the Presbyterian Church (U.S.A.).

A product of Bullinger's mature thought, this second confession presents Calvinism as evangelical Christianity, in conformity with the teachings of the ancient church. Though scholastic and lengthy, it is moderate in tone. Harmony with the teachings of the ancient church is important; variety in nonessentials is allowable. The teachings of the Greek and Latin theologians of early days are valuable, though tradition must always be subordinated to Scripture. The ecumenical creeds of the early undivided (pre-Roman) church are scriptural. The Roman claim to be the true successor of the early church is vigorously assailed. The doctrine of election from eternity is affirmed, as befitted a Calvinistic confession. Against the Anabaptists, the Confession defends baptism of children, participation in civil life, and taking up arms under certain conditions (only in self- defense and only as a last resort).

TABLE OF CONTENTS
Chapter I - Of The Holy Scripture Being The True Word of God
Chapter II - Of Interpreting The Holy Scripture; and of Fathers, Councils, and Traditions
Chapter III - Of God, His Unity and Trinity
Chapter IV - Of Idols or Images of God, Christ and The Saints
Chapter V - Of The Adoration, Worship and Invocation of God Through The Only Mediator Jesus Christ
Chapter VI - Of the Providence of God
Chapter VII - Of The Creation of All Things: Of Angels, the Devil, and Man
Chapter VIII - Of Man's Fall, Sin and the Cause of Sin
Chapter IX - Of Free Will, and Thus of Human Powers
Chapter X - Of the Predestination of God and the Election of the Saints
Chapter XI - Of Jesus Christ, True God and Man, the Only Savior of the World
Chapter XII - Of the Law of God
Chapter XIII - Of the Gospel of Jesus Christ, of the Promises, and of the Spirit and Letter
Chapter XIV - Of Repentance and the Conversion of Man
Chapter XV - Of the True Justification of the Faithful
Chapter XVI - Of Faith and Good Works, and of Their Reward, and of Man's Merit
Chapter XVII - Of The Catholic and Holy Church of God, and of The One Only Head of The Church
Chapter XVIII - Of The Ministers of The Church, Their Institution and Duties
Chapter XIX - Of the Sacraments of the Church of Christ
Chapter XX - Of Holy Baptism
Chapter XXI - Of the Holy Supper of the Lord
Chapter XXII - Of Religious and Ecclesiastical Meetings
Chapter XXIII - Of the Prayers of the Church, of Singing, and of Canonical Hours
Chapter XXIV - Of Holy Days, Fasts and the Choice of Foods
Chapter XXV - Of Catechizing and of Comforting and Visiting the Sick
Chapter XXVI - Of the Burial of the Faithful, and of the Care to Be Shown for the Dead; of Purgatory, and the Appearing of Spirits
Chapter XXVII - Of Rites, Ceremonies and Things Indifferent
Chapter XXVIII - Of the possessions of the Church
Chapter XXIX - Of Celibacy, Marriage and the Management of Domestic Affairs
Chapter XXX - Of the Magistracy

Effectual Call — Internal Call (Bible)
Bible Passages
Teach Me!
H.B. Charles Jr.
What is a Christian's Duty to Unjust Government?
Phil Johnson
Infallibility/Inerrancy
B B Warfield
Athanasius (NT Canon/AD 367)
St. Athanasius
Is Jesus Simply a Retelling of the Horus Mythology?
J Warner Wallace
Those Pre-Christian Deities Aren’t Much Like Jesus After All
J Warner Wallace
Is Jesus Simply a Retelling of the Mithras Mythology?
J Warner Wallace
Atheists in Praise of Christianity?
Jonathon Van Maren
What Millennials Don’t Know About Socialism and Communism Will Hurt Them
Gary DeMar
Church Elders Can Help with Your Family Crisis
Chap Bettis
What Is a Covenant?
Keith Mathison
The Discipline of God
Joel R Beeke
Is COVID-19 a Great Opportunity?
Victor Cruz
Turning the Other Cheek
Michael Aitcheson
6 Reasons Why Adam and Eve’s Eating of the Forbidden Fruit Was a Terrible Transgression Against God
Le Ann Trees
A Review of David Bentley Hart’s “That All Shall Be Saved”
Wyatt Graham
The Enslaving "Alternatives" to Christianity
W Robert Godfrey
The Lord Gives and the Lord Takes Away
R C Sproul
Am I Called to be a Pastor?
Dr. John MacArthur
Don’t Waste this Time - Pray for What Matters Most Globally (With a Tribute to Joyce Lin)
Phil Layton
Peacemaking in the Church: Covid-19 and Conscience
Peter John Louie
The Coming Pastoral Crash
John Dobbs
Anderson Cooper and the New Normal
John Stonestreet
Scientism: The Twisted Religion Of Science & Why It’s False
Daniel Currier
Psalms for Troubled Times
William Boekestein
A Believer's Last Day, His Best Day (eBook)
Thomas Brooks
3 Mentalities to Shape Your Parenting
Paul D Tripp
Divided Love Is Idolatry
W Robert Godfrey
Where to Begin: Starting to Explore Christianity
Mark Dever
Why We Don’t See Church as ‘Essential’
BRETT MCCRACKEN
Who Is Representing You—Adam or Jesus?
J V Fesko
God Saves Confused Sinners Who Cannot Save Themselves
Josh Buice
Why I’m religious, not just spiritual
Rev. Jim Witteveen
The World is Not my Parish
Matt Scheffer
Queer Times
Carl Trueman
Under the Rainbow Banner
Darel E. Paul
What Is God Up To?: The Temptation to Overinterpret Suffering
Ed Welch
The Spiritual Man's Aim (eBook)
Richard Sibbes
Why Do We Call Them the “Formal” and “Material” Principles of the Reformation?
Justin Taylor
Help! My Kids Don’t Like Going to Church
Megan Hill
20 Quotes on Christ’s Heart (From the Best Book I’ve Read All Year)
Dane C Ortlund
Recovering the Forgotten Doctrine of Christ’s Ascension
Patrick Schreiner
What is Our Future? (Ezekiel 47:1-12)
Darryl Dash
The Antidote for Despair
David Robertson
Trinitarian Worship Is Jesus Centered
Josh Buice
How Social Media Worsens the Theological Divide
Rhyne R. Putman
Why Does Everyone Seem so Angry at Each Other?
Joshua D. Chatraw
Goals and Methods in Mission & Evangelism
John Samson
Theological Primer: The Ascension
Kevin DeYoung