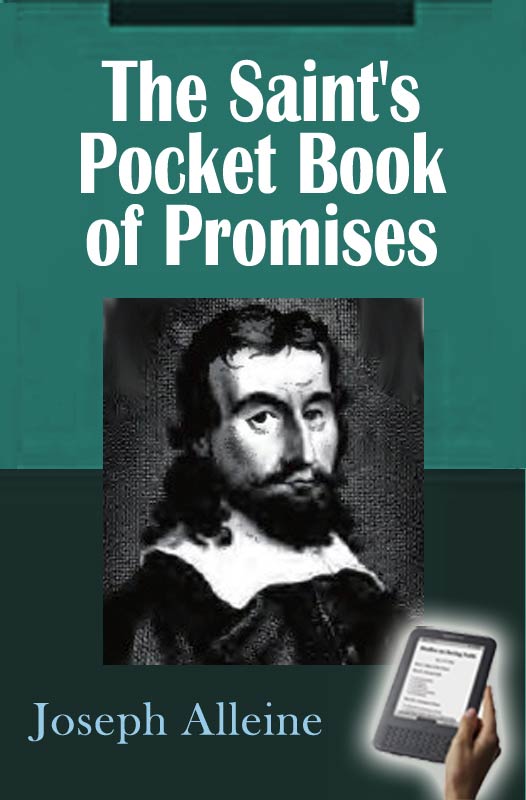 THIS excellent Manual, which contains several of Mr. Alleine’s Remains, enumerated by Wood, has been published several times, under the titles of “The Saint’s Pocket Book” and “God speaking from Mount Gerizim, or the Gospel in a Map.” But the first publication of it in a separate form was undertaken in the year 1766 by the Rev. John Ryland, of Northampton, when it was entitled, “The Voice of God in his Promises, or strong Consolations for true Christians, etc.,” and comprised but the first three chapters of this work. He gives the following account of it:

“But, above all, in that gaol he (Mr. Alleine) wrote this glorious ‘Synopsis of the Covenant of Grace,’ or ‘The Voice of the Lord in his Promises,’ to which he prefixed the ‘Voice of the Herald,’ and to which he subjoined the ‘Voice of the Redeemed;’ all which you have now in your hands. He also added a most rich and copious meditation, entitled, ‘A Soliloquy, representing the Believer’s Triumph in God’s Covenant, and the various Conflicts and glorious Conquests of Faith over Unbelief.’

“These precious and most comfortable pieces were sent from gaol to his beloved flock at Taunton, and were both printed in the year 1666, and inserted in a book written by his father-in-law, Mr. Richard Alleine, entitled, ‘Heaven Opened; or a Brief and plain Discovery of the Riches of God’s Covenant of Grace, being the third part of Vindiciae Pietatis, by R. A. London, printed Anno 1666.’

“From this book a worthy and pious lady transcribed that part styled ‘The Voice of the Lord in his Promises;’ and by her friendly permission I have reprinted it.

“Mr. Hervey, before he died, saw this book in the original, and said it was the richest piece he ever read in his life.”

This little book was enriched with many new and appropriate scriptural references by the late Rev. David Simpson, of Macclesfield, who evinced the high estimation in which he held it by causing it to be reprinted, and circulated in that populous town and neighbourhood. In this edition, these references have been corrected and verified, and greatly augmented by several additional passages. The obsolete words have also been explained in the margin.

The greater portion of this small work relates to that solemn covenant, which is virtually made, between every righteous man and his Maker, and which is adverted to and renewed in every solemn act of devotion. No author has written on it with greater clearness and ability than Joseph Alleine.

It is mentioned by his friend Mr. Baxter, as one of his greatest excellences, that “as in all his ministry he was extraordinarily addicted to open to the hearers the covenant of grace, and to explain religion in the true notion of covenanting with God and covenant-keeping, and greatly to urge men to deliberate well-grounded resolutions in this holy covenant; so God was pleased to give him a certainty and sense of his divine faithfulness, in fulfilling the promises of his covenant, and a lively sense of all the benefits of it. And his faith in God, for the performance of his part, was as strong and fixed as was his own resolution in the strength of grace to be true to God. And as he was resolved, through grace, never to forsake Christ, so Christ did never fail or forsake him. In the valley of the shadow of death he feared no evil. But when his flesh and heart failed, as to natural strength, the Lord was the rock or strength of his heart, and never failed him.” See the following Sketch of his Life, p. xxiii.

In some passages of Scripture, Mr. Alleine has given the marginal reading, as more significant than that of the text, and in others his phraseology varies from both of them, being an elucidation of the same sentiments with a little difference of expression. He has also employed a few passages in an accommodated sense.

Some exception will perhaps be taken against the application of Scripture to the “wicked shepherds” (p. 128) who were then appointed over many churches, and (p. 151) to the “affliction and destruction of the enemies.” Such allusions seem to savour greatly of the maledictory verses in the Psalms, which are considered to be irreconcilable with the mild and forgiving temper inculcated by the Saviour. But it is evident that these passages were quoted only to show the persecuted that “the needy shall not always be forgotten, the expectation of the poor shall not perish forever.” Those are God’s people who love their enemies, bless those who curse them, and do good to those who hate them. While cultivating these dispositions, should the cry of the righteous be, “O Lord, I am oppressed; undertake for me,” their prayer would enter into the ear of the Lord of Sabaoth, and he would not be slack, in his own way, (and that way might be by the discomfiture of their enemies,) to grant them deliverance. That no vindictive personal feelings were at all in his contemplation, is obvious from Mr. Alleine’s own words (p. 152), “These promises are to be applied by us, as they are the enemies of God and of his Gospel, and ours for his sake.”

CHAPTER 1. THE VOICE OF THE HERALD,  BEFORE THE GREAT KING.

CHAPTER II. INTRODUCTION. – THE PROCLAMATION; OR, THE VOICE OF THE LORD.

SECTION I. The IMMUNITIES and LIBERTIES of the covenant, consisting in,

I. Our general discharge from all our debts.

III. Our protection from all enemies:

SECTION II. The PRIVILEGES and PREROGATIVES of the covenant.

2. Instead of relations, to be our friend.

SECTION III. He conveys himself to us in all ESSENTIAL PERFECTIONS and PERSONAL RELATIONS.

I. In all his ESSENTIAL PERFECTIONS.

II. In all his PERSONAL RELATIONS.

SECTION IV. He gives all things with himself, both PRESENT and TO COME.

I. THINGS PRESENT are ours.

II. THINGS TO COME are ours.

CHAPTER III. THE VOICE of THE REDEEMED

SECTION I. The Soul takes hold of God’s covenant.

SECTION II. The assaults of unbelief. It questions,

1. The truth of the promise.

SECTION III. It confounds the soul,

2. With the amazing greatness and difficulty of the things promised.

4. To God’s grace and an interest in the promise.

SECTION VI. Faith makes its claim to all the benefits of the Covenant,

CHAP. VIII. OF THE MEANS OF GRACE.

A promise is to be applied in every ordinance.

CHAPTER XI. PROMISES FOR THE SAINT’S SUPPORT IN TIMES OF TROUBLE AND PERSECUTION.

Mystery of Christ's Kingdom Known to Believers
Thomas Boston
The Shortness of Human Life
Thomas Boston
John Owen & Andrew Fuller
Carl Trueman
Of Redemption - 33 early Church fathers up through A.D. 390
John Gill
Romans 8 and the Extent of the Atonement: Help from John Murray
John Murray
Of Universal Redemption
Christopher Ness
Resources On Amyraut, Amyraldianism, And Hypothetical Universalism
R Scott Clark
Arguments Against Universal Redemption
John Brown of Wamphray
Redemption Effectually Applied
Robert Shaw
Extent of the Atonement
William Cunningham
Richard Muller on Amyraut
Richard Muller
A Tale of Two Wills: Calvin and Amyraut on Ezekiel
Richard Muller
Richard Muller on Hypothetical Universalism & the Reformed Tradition
Richard Muller
Smartphones and Fallen Natures
Doug Eaton
Discard Entanglements
Rev D Patrick Ramsey
An Impending Danger
Curated Resources
What Lewis Had Wrong about Hell
Curated Resources
The influence game
Janie B. Cheaney
Clinging to God and Grammar
Carl Trueman
The Hidden Harm of Gender Transition
Sharon James
Three Encouragements for a Courageous Life
Isaías Muñoz
Opening Blind Eyes to the Truth about Sex-Trafficking in America
Curated Resources
It Is Finished: Beholding the Cross of Christ from All of Scripture
David Schrock
God’s Love for the Believer is as. . .
Nicholas T Batzig
Proof of God?
Joseph Minich
A Complete Collection of Farewell Sermons (eBook)
Various Pastors
Calvinism and the Doctrine of Philosophical Necessity
William Cunningham
Man’s Creation in a Holy but Mutable State
John Howe
God’s Foreknowledge of Man’s Voluntary Actions does not Necessitate the Will of Man
Stephen Charnock
How Should We Respond to the Book of Revelation?
Dennis E Johnson
Bring Back Foxe’s
Darryl Dash
Fighting Human Trafficking in Your City
Curated Resources
Creeds and Confessions: What’s the Difference?
Curated Resources
Who Will ‘Stand in the Gap’?
D A Carson
Ten Words That Changed Everything About My Suffering
Joni Eareckson Tada
Gnosticism and Naturalism: Why We Must Reject Both!
Craig Carter
How do I read the Old Testament historical books devotionally?
Samuel Lee
The Family Expositor - Romans (docx)
Philip Doddridge
An Election of Particular Persons
Benjamin Keach
How Sins are Removed in Justification
Samuel Rutherford
Of the Conditionality of the New Covenant.
John Flavel
How Christians answer to the call of Christ, and so come to have Fellowship with him
John Ball
How Christ Doth Bring His People into Covenant with Himself
John Ball
A Treatise of the Covenant of Grace
John Ball
One Overlooked Danger in Christian Parenting
Trevin Wax
Christian Identity according to the Apostle Paul
Matthew Adams
The Effectual Truth of Identity Politics
Curated Resources
Concerning the One True God’ & ‘Of God the Father
Zacharias Ursinus
Propositions and Principles of Divinity
Curated Resources
The True God Opposed, Exclusively, To All the God's of the Heathen
John Calvin