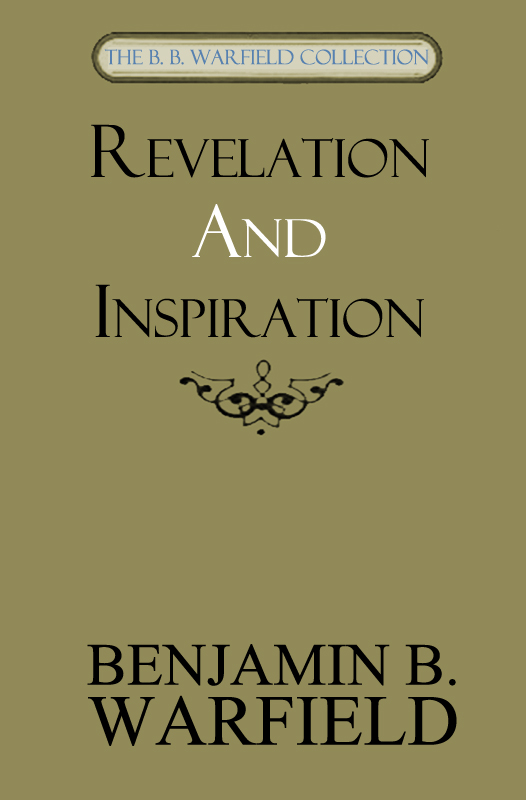 CHAPTER I: THE BIBLICAL IDEA OF REVELATION

CHAPTER III: THE INSPIRATION OF THE BIBLE

CHAPTER V: "SCRIPTURE," "THE SCRIPTURES," IN THE NEW TESTAMENT

CHAPTER IX: "THE ORACLES OF GOD"

I. THE DIVINE ORIGIN OF THE BIBLE

II. THE CANON OF THE NEW TESTAMENT

Why Do We Need to Keep Praying “Forgive Us Our Debts?”
Kevin DeYoung
New York Times Admits: Experimenting On Trans Kids Has Horrifying, Irreversible Consequences
Curated Resources
The transgender revolution and the death of truth
Albert Mohler
Out From the Prosperity Gospel and Into Biblical Christianity
Virgil Walker
Book-burnings and cancel culture come for Narnia, Tintin, and other children’s classics
Jonathon Van Maren
After Roe: What’s Our Job Now?
George Grant
Is the Rapture Taught in the Bible?
Curated Resources
The Secular Thinkers Who Believe Democracy Needs Christianity
Akos Balogh
Is repentance an aspect of faith, or is repentance a good work?
Stephen J Nichols, Steven J Lawson, Burk Parsons
Context: Fundamentalists, Modernists, and Fosdick’s Sermon
Sean Lucas
Come to the Feast
Scott Aniol
Nothing But the Truth
David Steele
Ancient Near Eastern Religion and the Old Testament
Dr Robert Gonzales Jr
The Double Cure
Grover Gunn
Truth, Love, and The Definition of ‘Inclusion’
John D Hannah
The Dangers of Syncretism and Idolatry
Scott Aniol
Exiles Again
Bill Fullilove
Ten Resources That Have Helped Me Make Sense of Our Current Culture and How Christians Are Responding to It
Andy Naselli
Pastoral Accommodation of Same-Sex Relationships: A Critique in Light of 1 Corinthians 5–6
Lee Irons
The Christian Family and the Burkean Body Politic
Hunter Baker
Praying together as a family: Corporate prayer in Philemon
Michael Haykin
The Power of the Two-Parent Home
Kevin DeYoung
Indicatives, Imperatives, and Applications: Reflections on Natural, Biblical, and Cultural Complementarianism
Joe Rigney
Living in the Family: Thoughts from William Gouge
Joel R Beeke
3 Ways to Stay Focused While Praying
Doug Eaton
A Most Harmful Medicine: How Subjectivism Poisons a Society
Joe Rigney
Foreword to ‘The New Reformation Catechism on Human Sexuality’ by Rosaria Butterfield
Rosaria Butterfield
Is It Arrogant to Say Jesus Is the Only Way?
R C Sproul
Help! I Love Jesus but Not the Church
Dustin Benge
Help! I'm Raising a Modalist
Curated Resources
Why Is the Book of Acts So Focused on Peter and Paul?
Richard B Gaffin Jr
What Is the Sin that Leads to Death? (1 John 5)
Ray Van Neste
What Does It Mean to Pray “Your Kingdom Come”?
Kevin DeYoung
Postmodernism’s Revenge
Kevin DeYoung
Old New Calvinism: The New School Presbyterian Spirit
Dr. S. Donald Fortson
Why Gentleness in Ministry Matters More Than You Think
Michael J Kruger
How to Wait Patiently for the Lord’s Return
Doug Eaton
The Internet Is More Powerful Than the Printing Press
Chris Martin
Is Richard Rohr’s ‘Universal Christ’ Christian?
Ian Paul
Seven principles for cultivating a Christian posture toward the world
Kevin DeYoung
Overcoming Doctrinal Pride
Matt Foreman
The Rhetoric of Puritan Preaching
Joseph Steele
The Final Word - Hebrews 1:1–2:18
Kevin DeYoung
Simplicity in Preaching
Kevin DeYoung
The Order of the Decrees
Leonard De Moor
Marks of a Good and Faithful Theologian
Trevin Wax
Dear Mrs So and So
Kendall Lankford
Who Is to Blame for Tragedy? A Look at Jesus’ Answer in Luke 13:1-5 and John 9:1-3
Kim Riddlebarger
A Rebuilt Temple in Jerusalem?: A Look at Ezekiel's Vision in Chapters 40-48
Kim Riddlebarger
‘This Was Pure Evil’: The Necessary and Accurate Moral Declaration About the Racially Charged Shooting in Buffalo
Albert Mohler