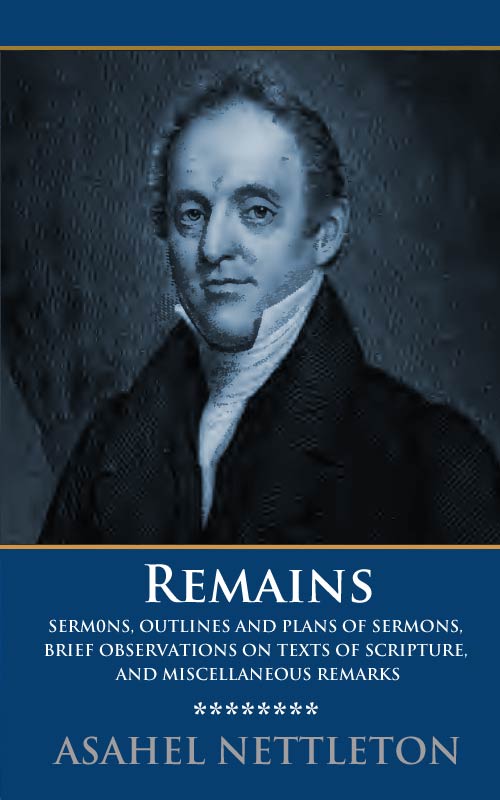 The friends of Dr. Nettleton, especially those of them who were favored with the privilege of listening to those lucid and striking exhibitions of divine truth which fell from his lips in the pulpit, and in private conversation, have expressed deep regret that he did not commit more of his thoughts to writing. The fact that he did not, is to be attributed to the peculiar circumstances in which he was placed. In the early part of his ministry, while he enjoyed vigor of body and mind, he was almost constantly laboring in revivals of religion; and he was so much occupied in teaching publicly and from house to house, that he had but little time for the use of his pen. He was led to adopt the practice of preaching without writing, and this became his usual and habitual mode of preaching. The consequence was, that he never acquired the habit of writing with facility, and it eventually became rather an irksome employment. He wrote but few sermons, and scarcely any in full. There are very few, if any, of those which are contained in this volume, which were not considerably enlarged by extempore remarks at the time of delivery. And the skeletons of many of his discourses, if they were ever written, have not been preserved. But still, his manuscripts, few and imperfect as they are, contain many valuable thoughts which ought not to be lost to the world.

A very strong desire has been manifested, in different quarters, that a volume should be compiled from Dr. Nettleton's papers. In compliance with this desire, the present volume is given to the public.

In perusing these sketches, multitudes will be reminded of the solemn period in their history, when these very discourses were to them the power of God unto salvation. They will perceive, of course, that many of them are only outlines of the sermons as they were preached; but they will find in them many things which they will doubtless recollect. Some of these outlines of sermons were found among the manuscripts of Dr. Nettleton. Quite a number of them, however, were taken from his lips, and written at the time, during his last sickness. It is proper that the reader should be apprized, that what is here exhibited will give but an imperfect view of the character of Dr. Nettleton's preaching; for many of his most impressive sermons, and parts of sermons, were never committed to writing. And besides, there was much in his manner of delivery, that gave interest and efficacy to his preaching, of which nothing can be learned by reading his discourses.

But this volume, if the compiler does not mistake, will be found to be rich in thought, and will be read both by ministers and private Christians, with interest and profit. That the same divine influence which accompanied the preaching of these discourses, may accompany the perusal of them, and bless them to the sanctification of Christians, and the conviction and conversion of sinners, is the prayer of the compiler. EAST WINDSOR, June 1st, 1845.

SERMON 1.
Christians urged to awake out of sleep.

SERMON 2
Sinners affectionately entreated to enter on the Christian pilgrimage

SERMON 3
The sin and consequences of being ashamed of Christ

SERMON 5.
Perseverance of the Saints.

SERMON 6
The Parable of the Lost Sheep

SERMON 7
The Parable of the Prodigal Son

SERMON 9
The Fearful Condition of Apostates.

SERMON 10.
The danger of hypocrisy

SERMON 16.
The Rich Man and Lazarus.

SERMON 17.
The duty of Fasting, and the manner in which it should be performed.

SERMON 20.
Sinners entreated to be reconciled to God.

SERMON 21.
The certain ruin of all who do not seek salvation aright.

SERMON 22.
Some who are living, are greater sinners than some who are in hell.

SERMON 23.
The folly of making a hypocritical profession of Religion.

SERMON 24.
The Government of God is a matter of rejoicing.

SERMON 25.
Christ is standing at the door.

SERMON 26.
Religion is the only Source of True Happiness.

SERMON 29.
The ways in which sinners cover their sins.

SERMON 30.
The example of Esau, a warning to sinners.

SERMON 31.
The sinner is slain by the law.

SERMON 33.
The burdened sinner is invited to Christ for rest.

SERMON 34.
The necessity of regeneration is no matter of wonder.

SERMON 35.
The Nature and Reasonableness of Evangelical Repentance.

SERMON 37.
Salvation for the Lost.