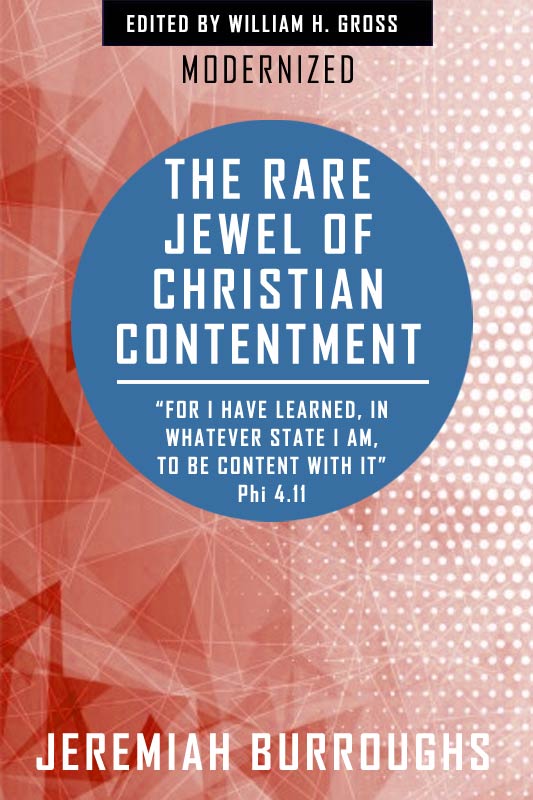 It’s always helpful to put books or sermons in their historical context, just as we do with the text of Scripture when we preach it. These sermons were given at a particular time in history, and at a particular time in the life of the preacher, Jeremiah Burroughs. So I’ve annotated some of those events, and explained who those persons were, and even what some of those words meant at the time – what images they conveyed to his English listeners, like “Privy Chamber.”

One of the things you’ll notice in these sermons, is that they’re not doctrinal treatises written for the Academy. They were written simply; they needed very little modernizing. These are homilies — practical applications of the truth of Scripture — written to the people of God, who needed encouragement at the time. And so he repeats himself to drive home his points. I think it helps if you imagine yourself sitting in a pew. See Burroughs in the pulpit, speaking off-the-cuff from his scant notes, nodding at folks, turning from side to side, repeating to one group, what he just said to the other — pounding the pulpit to drive home a point.

Along the way, he goes down a rabbit trail or two. He organizes his thoughts on the fly, rewording an important truth — putting it two or three different ways so you don’t miss it. Meanwhile, in the front row, a stenographer is frantically taking notes, hoping to preserve what he’s saying, and even how he’s saying it, so that later generations might enjoy it too. That would explain the many incomplete sentences, missing words and odd punctuation, all those parenthetical thoughts, and mixtures of I, we, and you in the same sentence. They make sense if you hear him change his voice, maybe turning aside to speak to no one in particular, as if taking on a character, playing a role on stage. He lets the congregation “overhear” his thoughts as he weighs the import of it all. He puts himself in their shoes, thinking their thoughts, using their words...

To help with that, I’ve completed sentences, provided missing words, finished thoughts, and even used contractions to make it more conversational (it’s OK, there were many contractions in the original). I added sermon titles, and the dates for each sermon from the margins of the 1670 edition. Three were dated Sept. 21st (an obvious error). I changed the first one to the 14th, and the third to the 28th. I avoided paraphrasing (as far as possible), so you hear his ideas the way he conveyed them. I added and corrected a number of scripture references, footnoting the full text when appropriate. Otherwise, this is the 1651 wording. That’s important, because a lot changed in the twenty years from 1651-1670. This sermon series was given in the heat of battle, literally.

As Burroughs opens the next sermon in the series, he gives a brief summary of where he left off the “last day” — some may not have attended the previous one. And because it’s a series, each week may not be self-contained; they overlap. He begins a new topic part way through one sermon, and continues it the next. That happened in Sermon 4 with the Lessons, and Sermon 9 with the Pleas. In some editions of this work, the sermons are grouped topically. As a result, you may find only eight “chapters” listed for the eleven sermons that were actually given. I chose to keep the organization of the original 1651 publication, the sermons as presented in 1645.

Who was Jeremiah Burroughs, anyway? He was born in 1599, and studied at Emmanuel College, Cambridge. He graduated in 1624, but left university because he had become a non-conformist. That means he was opposed to changes in the Book of Common Prayer favoring Roman Catholic doctrine and practice, over the principles of the Reformation that Cranmer established a hundred years earlier. Burroughs refused to conform to them. He wanted pure doctrine and practices, drawn from Scripture alone; hence the term “Puritan,” which had been used since the 1550s.

Burroughs was assistant to Edmund Calamy at Bury St. Edmunds. In 1631 he became rector of Tivetshall, Norfolk. He was suspended for non-conformity in 1636, and afterward deprived of his office. He went to Rotterdam in 1637, to be a teacher of the English church there. He returned to England in 1641 and served as a preacher at Stepney and Cripplegate, London. But those were turbulent times. Burroughs was a contemporary of Oliver Cromwell, who led the Parliamentarians against the Royalists in the first English Civil War of 1642-1646.

Burroughs was a member of the Westminster Assembly, and one of the few who opposed the Presbyterian majority. He was one of the Five Dissenting Brethren who put their names to the Independent manifesto, An Apologetical Narration, in early 1644. He was one of the most distinguished of the English Independents, and one of the most moderate, acting in accordance with the motto on his study door (in Latin and Greek): "Opinionum varietas et opinantium unitas non sunt ασυστατα (asustata)" — "Difference of belief and unity of believers are not inconsistent."

He gave these sermons in late summer, 1645. Burroughs was then serving in the Westminster Assembly, helping to prepare the Westminster Confession of Faith which would be published the following year, 1646. That’s the context of these sermons. And that’s the context of the final sermon in this book, “The Saints Duty in Times of Extremity.” On November 13, 1646, Burroughs died of complications resulting from a fall from his horse two weeks earlier, on his way back from the Westminster Assembly. Samuel Bolton took his place in the Assembly.

As a postscript to this history, in 1660 the monarchy of England was restored under Charles II. Two years later, the Act of Uniformity was passed. It led to the Great Ejection, when 2000 Puritan preachers were forced from their pulpits and their positions, for failing to accept the revised Book of Common Prayer with its Catholic practices. They were forbidden to preach, teach, or even pray in public with others. Many went to prison; others fled to the Continent; still others to America. They had been living in fear, in the middle of a bloody Civil War, faced with danger at every turn. They needed to find the peace, security, and contentment that God alone can provide. There is no safe harbor on earth. That’s a truth which every generation of God’s people should take to heart, including our own. And that’s Burroughs message to us in this series.

May this buoy your spirits, freshen your mind, and renew your confidence in our Mighty God. He goes before us, and He goes behind, as we daily go about the work of our Lord Jesus Christ.

P.S. Burroughs uses the word “estate” throughout this sermon series. What does he mean? Some say your estate is your net worth – your wealth; others say it’s your land, or your personal property – like your favorite fishing rod. But that’s not quite what Burroughs has in mind. It’s what you accumulate during your lifetime, whether debt, or surplus. It’s where you live, in your heart. Your estate is your heritage, and it will be your legacy. Adam left us an earthly estate of sin and death, a material estate. But the estate we inherit in Christ is righteousness and life, a heavenly estate. Contentment is choosing the right estate in which to live, by God’s grace.

Sermon 1: Contentment: What It Is.

Sermon 2: The Art and Mystery of Contentment.

Sermon 3: The Art and Mystery of Contentment (cont’d).

Sermon 4: The Lessons of Contentment.

Sermon 5: The Lessons of Contentment (cont’d)

Sermon 6: The Excellencies of Contentment.

Sermon 7. The Evils of Discontentment

Sermon 8: The Evils of Discontentment (cont’d).

Sermon 9: The Aggravations of Discontentment.

Sermon 10: The Pleas of a Discontented Heart (cont’d).

The Saints’ Duty in Times of Extremity