The Presbyterian Standards: An Exposition of the Westminster Confession of Faith and Catechisms (eBook) 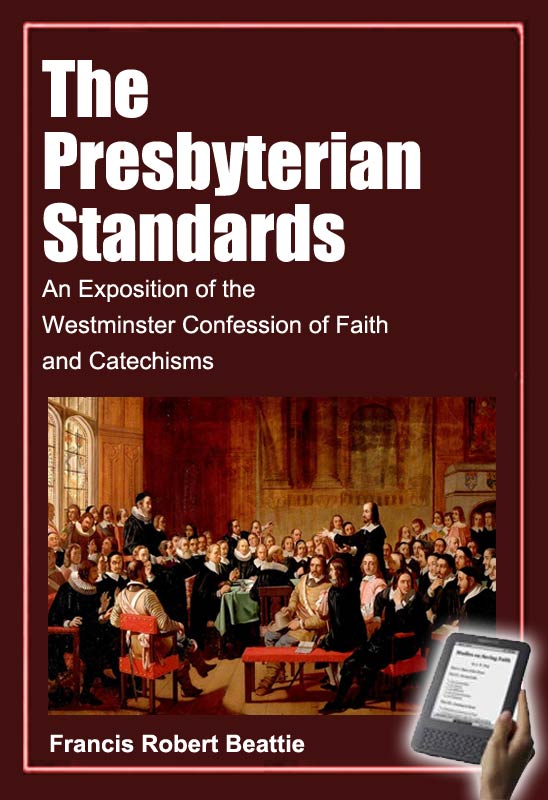 The aim of the following pages is to give a simple, connected exposition of the entire Westminster Standards. The Shorter Catechism is made the basis of the exposition, but the contents of the Larger Catechism and the Confession of Faith are carefully incorporated at every point. In addition, certain topics not included in the Catechisms are embraced in the Confession. Brief explanations of these topics are also made, so that the whole ground of the Standards is thereby covered.

It is not claimed that anything really new is presented in these chapters. From the nature of the case there could scarcely be. There are excellent treatises on the Confession by Hodge, Mitchell and others; while Paterson, Fisher and others have given us excellent expositions of the Shorter Catechism. But we are not aware of any book which follows closely the order of topics found in the Standards, and which at the same time weaves into a single exposition the contents of the three documents of which the Westminster symbols are composed.

It will be readily observed that in making this compend the language of the Standards has often been closely followed, and that it has at times been quoted more or less literally. At other times their statements have been expanded or condensed, explained or simplified, in order to present a somewhat compact and readable outline. Quotation marks are not used anywhere, since it is to be understood that the whole exposition is so closely conformed to the Standards as to be at times a reproduction of their form as well as of their contents.

It is the conviction of many earnest minds that there is need at the present day of careful instruction in the great doctrines of the Christian faith and life. No one who is even slightly acquainted with the movements of thought at the present time in the sphere of religious inquiry can fail to realize that there is diligent investigation, much unrest, and some scepticism. Modern scientific methods have been cariied into the field of theology and applied to the subject of Christian doctrine and duty. The result is, that in certain quarters we are solemnly assured that the old ways of looking at religious questions must be changed, and that former statements of the system of doctrine must be modified, if not abandoned. We are far from saying that this earnest activity of thought upon matters pertaining to the Christian faith is altogether evil, but we are convinced that it calls for careful caution and rigorous refiectioU upon the various problems with which the religious teacher must engage himself at the present time. Hard work by devoted and scholarly men is absolutely necessary in interpreting and defending the faith once delivered to the saints.

In these circumstances it is important that Presbyterians should be well instructed in the contents of the Westminster Confession and Catechisms, wherein their creed is clearly and fully exhibited. It may be too often true that even Presbyterians are not fully informed in regard to what their own creed contains. In proportion as this is true, it must prove a source of weakness; and a diligent study of the Standards should be undertaken at once in order to remedy this. It is hoped that this book may, in some measure, foster and further this study.

That other branches of the church of Christ are often sadly ignorant of Presbyterian doctrine and practice, and because of this ignorance often misconstrue and caricature Presbyterianism, must be confessed. Such ignorance and misconstruction are the main causes of the erroneous impressions of the Presbyterian system which so often prevail in other

churches. It is hoped that an outline like this may be found of soflae service in removing part of this ignorance and correcting a few of these misconstructions, for some may read this outline who would not peruse the Standards themselves with any care.

It may be proper to say that, whilst all through this exposition care is taken to explain the various teachings of the Standards, equal care is exercised not to explain away anything which they contain. It is assumed that the system of doctrine which they exhibit is generic and consistent Calvinism, and due diligence is exercised to present this system in its entirety and proper proportions. That there are difficulties inherent in the very nature of the case is not denied, nor is any attempt made to evade these difficulties. From time to time in the course of the exposition of this consistent and scriptural system, it will be suggested that the same and more serious difficulties press even more fatally against every other system. Hence, the Calvinistic system is seen to commend itself to thoughtful minds as the sound philosophy of nature and providence, and as the true interpretation of the Scriptures and of religious experience. This system has a philosophic completeness, a scriptural soundness, and an experimental accuracy which afford it strong logical confirmation, and give it secure rational stability. It may be safely said that no other system can justify so fully this high claim, for even those who profess no sympathy with the Calvinistic system have never yet been able to present a better one for our acceptance.

It is humbly hoped that Bible class and Sabbath-school teachers may find this book of some value to them in their important work. It may give them in a simple, systematic form a useful summary of the doctrines and practices as well as of the ethics and polity of the Presbyterian Church. In connection with the International Series of Lessons, where doctrinal teaching is not usually made prominent, the need of some such book as this may be felt.

For the members of Young Peoples' Societies this outline of Presbyterian belief may be found of some service in supplying that doctrinal teaching which, with God's blessing, is so important for advance in the Christian life and for effective service in the Master's name. In addition, the various office-bearers of the church often desire to be instructed in the doctrines and practices of the church they seek to serve. This book has also been prepared with this important end in view, and the hope is cherished that not a few of these earnest men may be helped by what its pages contain.

Two introductory chapters are added for those who may care to read them. One of these gives a brief history of the chief creeds of the Christian church, and the other seeks to explain the nature and uses of such creeds. These chapters are intended to prepare the way for a more intelligent and sympathetic study of the Westminster Standards, which constitute the creed of the Presbyterian churches. An index has also been added for purposes of speedy reference to the contents of the volume.

This book is sent forth with the earnest prayer that it may be of some service to those who are seeking to advance Christ's kingdom on the earth. May the Lord bless its contents to his own glory and the good of the church.

A Brief Description of the Great Christian Creeds

The Nature and Uses of Religions Creeds

The Doctrine of Holy Scripture The Being, Attributes and Persons of the Godhead

The Decrees, or the Eternal Purpose of God

Creation and Providence The Covenant of Works, or of Life

The Covenant of Grace The Person of Jesus Christ the Mediator

The Offices of the Mediator: The Prophetic

The Offices of the Mediator: The Priestly and the Kingly The Humiliation and Exaltation of Jesus Christ

The Law of God; Christian Liberty The Communion of Saints, and Religious Worship

The Means of Grace: The Word

The Means of Grace: The Commandments: The First Table

The Means of Grace: Prayer

Lawful Oaths; The Civil Magistrate; Marriage and Divorce Death and the Middle State

The Resurrection and the Judgment