Pastoral Theology: A Treatise on the Office and Duties of the Christian Pastor (eBook) 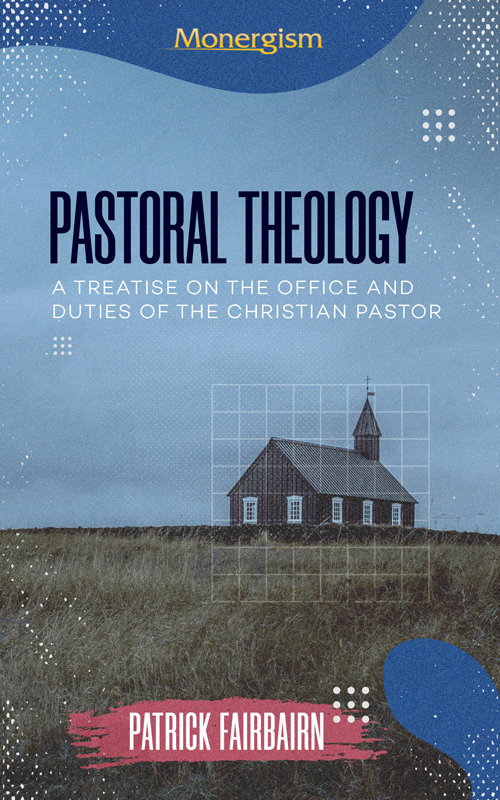 Fairbairn first turns to the nature of the pastoral office, its relationship to the church, the nature of it, and the call to enter the office. Then he discusses the social life of the pastor, special duties of the office, different kinds of discourses, pastoral visitations and catechetical instruction, visitation of the sick, afflicted and dying. He then turns to public prayer and devotional services, the administration of discipline, and finally the subsidiary means and agencies.

Fairbairn says, “This office has to do with the oversight and care of souls, and by its very name imports that ministers of the gospel are called to exercise somewhat of the same fidelity and solicitude in behalf of these, that shepherds are expected to do in respect to their flocks. “Remember them that have the rule over you,” (Heb. 13:7). The pastorate necessarily included the exercise of an administrative as well as of a teaching function; yet the teaching more directly and prominently, as everything was to proceed in connection with the knowledge and belief of the truth. Fairbairn says, “In apostolic times its primary object of concern was the diffusion of the gospel, and the planting of churches consequent on its propagation; the oversight and government of particular churches occupied but a secondary place.” It houses a ministry of reconciliation with Jesus Christ which would then accompany edification through Jesus Christ. It is in all respects, a service of love. In such a service there is, no doubt, a priestly element, since it requires those who would perform it aright not only to deal with men on behalf of God, but also to deal with God on behalf of men, to accompany all their ministrations of word and doctrine with intercessions at the throne of grace. “The minister is then in the very height of his dignity, when from the pulpit he feeds the Lord’s flock with sacred doctrine.”

In 1845 he published his famous Typology of Scripture, and in 1846 his Commentary on the Psalms. He also published Prophecy: Viewed In Respect To Its Distinctive Nature, Its Special Function, And Proper Interpretation and Jonah: His Life, Character and Mission. He was both a minister and a professor, teaching at Aberdeen. He died in 1874 from what seems to be either stroke or heart attack, and was unexpected.

CHAPTER I: INTRODUCTORY.—THE RELATION OF THE PASTORAL OFFICE TO THE CHURCH

CHAPTER II: THE NATURE OF THE PASTORAL OFFICE, AND THE CALL TO ENTER ON ITS FUNCTIONS

CHAPTER III: THE PASTORAL AND SOCIAL LIFE OF THE PASTOR

CHAPTER IV: THE MORE SPECIAL DUTIES OF THE PASTORAL OFFICE

CHAPTER VIII: THE ADMINISTRATION OF DISCIPLINE