Our Only Boast: the Cross of Christ! 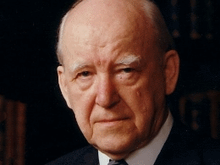 But God forbid that I should glory, save in the cross of our Lord Jesus Christ. (Galatians 6:14)

The preaching of the cross of Christ was the very center and heart of the message of the apostles, and there is nothing I know of that is more important than that every one of us should realize that this is still the heart and the center of the Christian message. In order to emphasize that, let me put it negatively first. What is the message of the Christian Gospel and of the Christian church? Now at the risk of being misunderstood I will put it like this: It is not primarily the teaching of our Lord. I say that, of course, because there are so many today who think that this is Christianity. They say, “What we need is Jesus teaching. He is the greatest religious genius of all times. He is above all philosophers. Let us have a look at His teaching, at the Sermon on the Mount and so on. That is what we want. What the world needs today, they say, “is a dose of the Sermon on the Mount a dose of His ethical teaching. We must preach this to people and teach them how to live.

But according to the apostle, Paul, this is not their first need. And I will go further. If you only preach the teaching of the Lord Jesus Christ, not only do you not solve the problem of mankind, but in a sense you aggravate it. You are preaching nothing but utter condemnation, because nobody can ever carry it out.

But we preach Christ crucified, unto the Jews a stumbling block, and unto the Greeks foolishness. (1 Corinthians 1:23)

So if we have never known this element of offense, either we have not seen it or we have had some misrepresentation of it. The cross is an offense to the mind of the natural man. It cuts across all his preconceived notions and ideas. It was a stumbling block to the Jews for this reason. They were expecting a Messiah to destroy the Roman conquerors. So when they found the One who claimed to be the Messiah dying in apparent weakness upon the cross, they were deeply wounded and offended.”

Whom God hath set forth to be a propitiation through faith in his blood, to declare his righteousness for the remission of sins that are past, through the forbearance of God. (Romans 3:25)

The cross is a mighty declaration. And what it says is this: The Son is a propitiation. In other words, God on the cross was punishing sin. He said that he would, and He has done it.

God has always said that sin is to be punished, that His holy wrath is upon it, and that He cannot deal with sin in any other terms. And He has done exactly what He promised. On the cross He is doing it publicly. There He is, once and for all, at the central point of history, pouring out His wrath upon the sins of man in the body of His own Son. He is striking Him; He is smiting Him; He is condemning Him to death. Christ dies, and His blood speaks. It is God’s punishment of sin and evil. It is a mighty declaration that God has done what He has always said He would do namely, that He would punish sin, and the wages of sin is death. And there you see it happening upon the cross. It is an announcement, a proclamation, that this is God’s way of dealing with the problem of sin.

I hasten to say this. It is obviously the only way to deal with sin, and the cross says that

There was no other good enough
To pay the price of sin;
He only could unlock the gate
Of heaven and let us in.