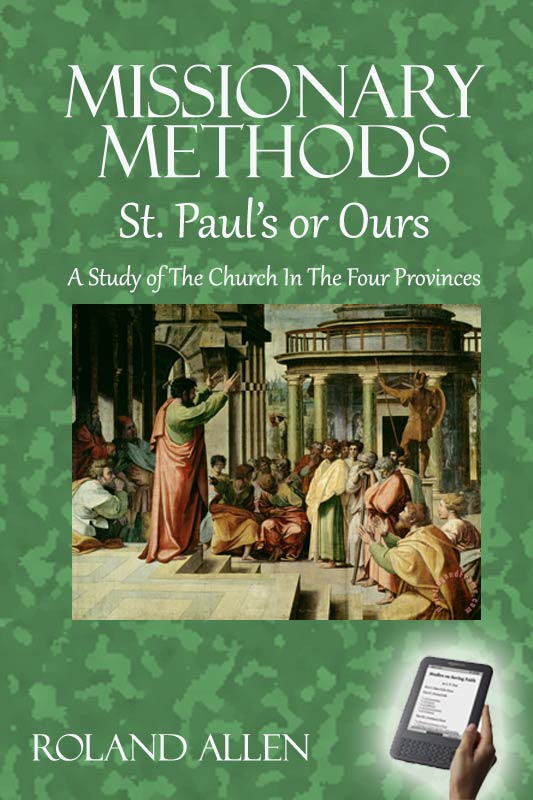 I WILL not commit myself to an agreement with all that Mr. Allen has said or all the arguments he has used in the following pages: but I am thoroughly in agreement with his main line of thought and his general contention. The question of mission policy needs to be studied far more than it has been studied in the past, with due reference to the first principles of missionary work which we find in the New Testament.

I have felt for some years past that our policy in India has been largely dictated by sentiment, by circumstances, by expediency rather than by first principles, and I am grateful to Mr. Allen for this effort to bring our missionary methods to the test of apostolic precedent. His argument is briefly as follows. St. Paul was the greatest Church-builder of Christendom. The circumstances under which he built may be in many respects different to those of the modern mission field. Still we cannot but assume that his principles have a permanent value for all time, even though their method of application may vary according to circumstances. His methods and principles may be summed up as follows: —

He had no preconceived plan of campaign; he went where the Spirit led; he sought for the open doors; he chose the centres most suitable for the gathering of converts and the propagation of the faith: he aimed definitely at converting men and women to faith in Christ: we never find him simply preparing the ground for future conversions.

Then he planted Churches which rapidly became self-supporting and self-governing. We never find St. Paul governing a Church by means of workers paid from foreign sources.

In about six months he has founded the Church, taught the converts the necessary elements of the faith, ordained a ministry and made provision for the administration of the sacraments. Then St. Paul passes on elsewhere, and the Church is left to grow by the power of the Holy Spirit. He occasionally visits it, writes to it and sends to it his fellow-workers; but in no case does he settle down to govern it as a modern missionary governs his district in India or China.

Again, in his teaching St. Paul is content to lay simple and strong foundations. He does not attempt to give it the elaborate teaching which is thought necessary in a modern mission. The teaching given to a modern candidate for Holy Orders in the mission field finds no parallel in the work of St. Paul.

Once more in the exercise of discipline, St. Paul strives to inspire a spirit, not to enforce a law. He carefully abstains from imposing upon his Churches any external code or authority. His object is not to compel them to obey a law, but to lead them to obey the inner guidance of the Holy Spirit.

Then, lastly, his ideal of unity is essentially spiritual. It is not based upon organization, but upon life. He makes no attempt to bind them all into one by any centralized organization or by obedience to a common authority, but by the power of one spirit and one life.

faith. We found Churches and keep them in leading strings for a hundred years, and even then are not within measurable distance of giving them independence. We transplant to the mission field the elaborate system of teaching and organization with which we are familiar at home. We impose discipline upon our converts as an external law and authority. Why is there a difference between our methods and those of St. Paul? It may partly be accounted for by a difference of circumstances.

But Mr. Allen maintains that this by no means entirely accounts for, or justifies, our wide departure from the methods of the Apostle; and I am strongly inclined to agree with him. At any rate, whether we agree with him or not, his argument deserves our serious consideration. The fact remains that, where St. Paul conspicuously succeeded, we have conspicuously failed. May it not be because we have worked upon widely different principles?

Commentary on Hebrews Chapter 11: A Cloud of Heavenly Witnesses Leading to the Heavenly Canaan (eBook)
William Perkins
Where Would We Be Without TRUTH?
C. R. Carmichael
Why The World’s Dark Business Is Booming
C. R. Carmichael
Man and Woman: A Biblical Systematic Anthropology
Steven Wedgeworth
There is No Faith So Little That It Is Not Saving
Jared Wilson
God’s Plan for Your Discontentment
Nancy Guthrie
Effectual Call — Internal Call (Bible)
Bible Passages
Teach Me!
H.B. Charles Jr.
What is a Christian's Duty to Unjust Government?
Phil Johnson
Infallibility/Inerrancy
B B Warfield
Athanasius (NT Canon/AD 367)
St. Athanasius
Is Jesus Simply a Retelling of the Horus Mythology?
J Warner Wallace
Those Pre-Christian Deities Aren’t Much Like Jesus After All
J Warner Wallace
Is Jesus Simply a Retelling of the Mithras Mythology?
J Warner Wallace
Atheists in Praise of Christianity?
Jonathon Van Maren
What Millennials Don’t Know About Socialism and Communism Will Hurt Them
Gary DeMar
Church Elders Can Help with Your Family Crisis
Chap Bettis
What Is a Covenant?
Keith Mathison
The Discipline of God
Joel R Beeke
Is COVID-19 a Great Opportunity?
Victor Cruz
Turning the Other Cheek
Michael Aitcheson
6 Reasons Why Adam and Eve’s Eating of the Forbidden Fruit Was a Terrible Transgression Against God
Le Ann Trees
A Review of David Bentley Hart’s “That All Shall Be Saved”
Wyatt Graham
The Enslaving "Alternatives" to Christianity
W Robert Godfrey
The Lord Gives and the Lord Takes Away
R C Sproul
Am I Called to be a Pastor?
Dr. John MacArthur
Don’t Waste this Time - Pray for What Matters Most Globally (With a Tribute to Joyce Lin)
Phil Layton
Peacemaking in the Church: Covid-19 and Conscience
Peter John Louie
The Coming Pastoral Crash
John Dobbs
Anderson Cooper and the New Normal
John Stonestreet
Scientism: The Twisted Religion Of Science & Why It’s False
Daniel Currier
Psalms for Troubled Times
William Boekestein
A Believer's Last Day, His Best Day (eBook)
Thomas Brooks
3 Mentalities to Shape Your Parenting
Paul D Tripp
Divided Love Is Idolatry
W Robert Godfrey
Where to Begin: Starting to Explore Christianity
Mark Dever
Why We Don’t See Church as ‘Essential’
BRETT MCCRACKEN
Who Is Representing You—Adam or Jesus?
J V Fesko
God Saves Confused Sinners Who Cannot Save Themselves
Josh Buice
Why I’m religious, not just spiritual
Rev. Jim Witteveen
The World is Not my Parish
Matt Scheffer
Queer Times
Carl Trueman
Under the Rainbow Banner
Darel E. Paul
What Is God Up To?: The Temptation to Overinterpret Suffering
Ed Welch
The Spiritual Man's Aim (eBook)
Richard Sibbes
Why Do We Call Them the “Formal” and “Material” Principles of the Reformation?
Justin Taylor
Help! My Kids Don’t Like Going to Church
Megan Hill
20 Quotes on Christ’s Heart (From the Best Book I’ve Read All Year)
Dane C Ortlund
Recovering the Forgotten Doctrine of Christ’s Ascension
Patrick Schreiner
What is Our Future? (Ezekiel 47:1-12)
Darryl Dash