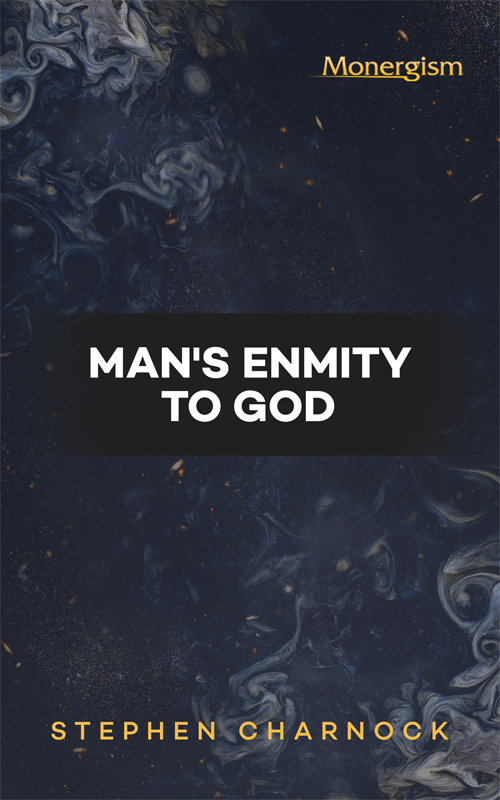 Upon the publication of the second volume of Mr Charnock's works, it was much lamented by those that knew him, and had a just value for him, that some sermons he was known to have preached (and which were as worthy of the public view as the rest, and no less useful to the grand design of man's salvation) could not be found among his papers; especially three sermons, which many heard him preach on three several Lord's days, upon 1 Tim. 1:15, 'Christ Jesus came into the world to save sinners.' But now, beyond expectation, instead of them, the good providence of God hath brought to light the two following treatises, by the unwearied diligence of Mr Ashton, one of the laborious transcribers of the first volume of this author's works, and who, to give him his due, hath raked them out of the ashes, and rescued them from that oblivion to which they seemed condemned, having with great pains and patience transcribed, as well as with great judgment joined together, the several materials he found belonging respectively to each subject, in the many loose papers of Mr Charnock he had by him. The papers I have seen, and, with Mr Ashton's help, have (so far as was needful) compared the transcription with them.

One of these treatises contains the continuation of the author's meditations on 1 Tim. 1:15. And herein he handles a second doctrine, grounded on the last clause of the verse. The text was fruitful, and bore twins, whereof the younger only survives; the other, I fear, is dead without recovery.

But I verily persuade myself that many an honest soul will have occasion to bless the Lord for the birth, shall I say? or the resurrection of this stillborn offspring of so worthy a father, being thereby stirred up not only to admire that rich grace of God which so eminently appears in many times calling the chiefest of sinners, but encouraged in the faith of it, and supported under the burden of the greatest guilt which we find so often oppressing, terrifying, and even sinking, awakened sinners into despair, when they look upon their sins as not only above the sins of others, but even above the mercy of God itself, and therefore unpardonable. If secure sinners shall dare to abuse the great truths here declared and set forth, to the strengthening their hands in their evil works, and emboldening themselves to a life of sin because God's grace abounds, at their peril be it, and let them answer for it. But in the mean time, it is pity that such rich and precious cordials should be withheld from those that need them, lest others to whom they do not belong should presumptuously catch at them, and undo themselves by misapplying them. And who knows not that what is a cordial to some may prove poison to others?

As for the other discourse, Of Man's Enmity against God, we cannot find when or where it was preached. I have been credibly informed, that the author had a design (had it pleased God to have prolonged his days) to have preached largely about original sin, and then it is not unlikely that he might intend this present treatise as one branch of it. And in it, if the reader can but dispense with one degree less of that accuracy and neatness of style which usually appears in his other writings, he will find as excellent matter, and great things, as in most of them, and indeed the true spirit of the author. He had made great use of the hammer in beating out the truth, but wanted time to apply the file for the more thorough smoothing and polishing of his work, which truly wants nothing but the finishing-stroke. The thread of this discourse is as finely spun as any, though the piece be not altogether so glossy; but whatever is wanting in ornament, is abundantly made up in usefulness. And if one of these treatises may be a glass in which humbled sinners may see the beauty and glory of sovereign grace, the other too may be a glass in which the best of saints may see the face of their own souls, and a lively representation of that inherent wickedness which all that diligently observe and know their own hearts cannot but acknowledge to be natural to them, as having been born with them into the world. I cannot but say that this discourse is an excellent portraiture of the old man; a graphical description of the devil's image impressed upon and deforming the most beautiful part of this lower creation. It shews how much man is debased and degraded by sin, and become a slave to his lusts, who was made at first to be the lord of his fellow-creatures; and so how rueful a legacy our first father has left us, and to what misery he hath entailed us, by communicating so cursed a nature to us. That the blessing of God may be upon these labours of his (long since) deceased but faithful servant, and that they may, by the power of his grace, be made effectual for obtaining the ends designed by the author, is the desire and prayer of him who is, good reader,

Thy soul's well-wisher, and servant for Jesus' sake,

An Advertisement to the Reader

PART I: Man's Enmity to God

PART II: Enmity against God as a Sovereign

PART III: Enmity Against the Attributes of God in General

PART IV: Enmity against the Truth