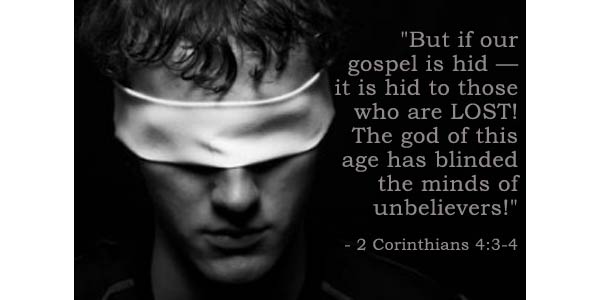 "But if our gospel is hid — it is hid to those who are LOST! The god of this age has blinded the minds of unbelievers!" 2 Corinthians 4:3-4

What multitudes of people there are who have no concern over, in fact, no consciousness of, their woeful condition! While they do not regard themselves as perfect, yet they are not aware that there is anything seriously wrong with them. They are respectable people, law-abiding citizens, and nothing particular ever troubles their conscience. They consider that they are certainly no worse than their religious neighbors, and though they scarcely ever read the Bible or enter a church, they fully expect to go to Heaven when they die.

Some of them will indeed admit that they are sinners, but imagine that their good works far outnumber their bad ones. Some of them were sprinkled as infants, attended a Sunday school class as children, said their prayers each night, and later joined the church. Nevertheless, to this moment, they have never realized that they are the enemies of God, an abomination in the eyes of His holiness, and that Hell is their just deserts! They see no beauty or glory in the Gospel, no suitableness in it unto their case, and therefore do they despise and reject it.

Though Satan rules in their hearts and lives (Ephesians 2:2), yet it is by their own free consent. They voluntarily obey him and submit to his will. His dominion over them is maintained by . . .
keeping their minds in darkness,
deceiving and deluding them,
blinding them by pride, prejudice, and the workings of their own corruptions.

Nowhere but in the Scriptures, can we learn what is the real condition of the natural man. There his case is diagnosed with unerring precision by the divine Physician. Many are the terms used therein by the Holy Spirit to describe the solemn and direful state to which the fall has reduced every descendant of Adam; and among them probably none is more pointed and awesome than is the term LOST! How dismal is its sound! How much is summed up in that single word! It signifies . . .
that the natural man is in a sinful, wretched, and perilous state,
that he is far astray from God,
that he has willfully and wantonly forsaken the path of duty.

Lost! A traveler from time to eternity, treading the road that leads to certain and everlasting destruction!

Lost! A creature who has forfeited the approbation and favor of his Maker, and is now an outcast from Him!

Lost! One who has squandered his substance in riotous living, and is now a spiritual bankrupt and pauper. He is out of the way of peace and blessing, and utterly incapable of finding his way back to it!

Fearful beyond words, is the condition of fallen man. His case is as hopeless as that of a dying person whose disease is incurable. A lost child is a pitiful object — but what mind can estimate or pen depict the tragedy of a lost soul? Lost now, lost forever — unless a sovereign God intervenes and performs a miracle of mercy for its recovery!

Man is lost positively, in that he is not what he should be. He is . . .
a defiled creature,
a guilty criminal,
a child of disobedience!

Lost judicially, under the curse of God's broken Law, sentenced to death, "condemned already" (John 3:18), the wrath of God abiding on him! (John 3:36)

Lost meritoriously, for his transgressions deserve eternal death, which is the wages of sin — and fully has he earned them.

Lost experientially in point of ability or power to recover himself, he is "not subject to the law of God, neither indeed can he be" (Romans 8:7). The moral impotency of man is such that he is utterly incapable of performing a single spiritual act: "Can the Ethiopian change his skin or the leopard its spots? Neither can you do good who are accustomed to doing evil! (Jeremiah 13:23)

None will know how utterly man is lost, until they experience God's wrath in Hell, and can then measure the fearful distance they have departed from Him!

Thus man is lost in every way, and in every sense!
Federally, by the imputation to him of the guilt of his representative's offence.
Effectually, by the transmission of a corrupt nature from his parents.
Actually, by his own evil conduct, "you have destroyed yourself" (Hosea 13:9).
Practically, by the forming of evil habits, so that now he is "held with the cords of his sins" (Proverbs 5:22).

Lost to God, for He has no love, no service, no glory from the unregenerate, so that they deprive Him of the honor of their creation.

Man is lost to himself . . .
to all reason and rational inducements,
to right conceptions and perceptions,
to every consideration of God's claims upon him.

Lost to all sense of shame for his horrible condition in the eyes of the Holy One.

Lost to piety and true happiness.

Out of the way of holiness, peace, and security.

Lost in sin, in ignorance, and error.

Lost irretrievably, like a sheep that wanders farther and farther astray, until it perishes. Man is utterly unable to find his way back to God, for he is in total darkness — a wanderer in a pathless desert, perishing in a howling wilderness. What makes man's case yet worse, is that he has no desire to be recovered! He has perversely set himself up to be his own master, and stubbornly determines to please himself and carve out his own career.

Rather than return unto God, the unregenerate would take any road which leads farther away from Him. They resent His expostulations and resist the strivings of His Spirit. If not with their lips, with their hearts, they say unto God: "Depart from us — for we have no desire to know Your ways!" (Job 21:14). Yes, they would much prefer to be annihilated than yet meet God face to face, and have to give an account of themselves to Him (Romans 14:12). They hate His holiness and dread His justice, while despising His goodness and abusing His mercies!

Now, dear reader, if you be Christless, the above describes your woeful case, and, as we have stated, it sets forth the unerring diagnosis of God Himself.

Note: The diagnosis here is pretty bleak but this is the truth about ALL OF US apart from the mercy of God in Jesus Christ. It is by God's mercy that we are saved, not by earning his favor though our goodness or merit. If the above essay describes you then trust in Jesus and your sins will be forgiven ... cast aside all hope in your own self-righteousness and put away all pride in you own goodness. Be glad to be regarded as spiritually bankrupt, turn and be saved by the free grace and righteousness of Christ. One who has been forgiven "glories in Christ Jesus and has no confidence in the flesh." (Phil. 3:3).

Excerpt from Studies in the Scriptures, July 1951