The London Baptist Confession of Faith of 1689 (eBook) 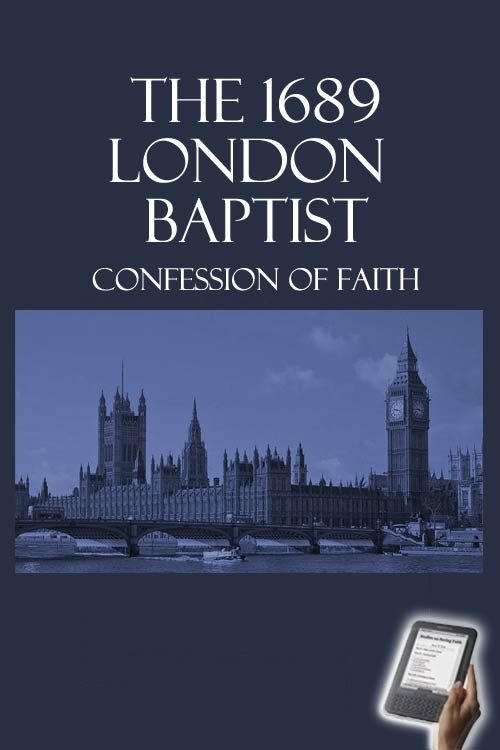 THE BAPTIST CONFESSION OF FAITH OF 1689 WITH SCRIPTURE PROOFS

Put forth by the Elders and Brethren of many Congregations of Christians (baptized upon profession of their faith) in London and the Country.

‘I have thought it right to reprint in a cheap form this excellent list of doctrines, which were subscribed to by the Baptist Ministers in the year 1689.  We need a banner because of the truth; it may be that this small volume may aid the cause of the glorious gospel by testifying plainly what are its leading doctrines . . . May the Lord soon restore unto His Zion a pure language, and may her watchmen see eye to eye.’  So wrote the young C.H. Spurgeon, then in the second year of his ministry at New Park Street Chapel, Southwark, in a preface addressed to All the Household of Faith, who rejoice in the glorious doctrines of Free Grace with which he prefixed this Confession when he published it in October, 1855.

The Confession itself was first compiled by the Elders and Brethren of many congregations of Christians, baptized upon their profession of faith, in London and the country (as they then described themselves) in the year 1677.  It was based upon, and drew its inspiration from the Confession drawn up by the Westminster Assembly of Divines a generation earlier, and indeed differs only from it in its teaching upon those matters, such as baptism, the Lord's Supper, and church government, upon which among the Reformed churches the Baptists differ from the Presbyterians.  For fear of persecution, the compilers of the 1677 Confession did not subscribe their names to it, but when, in September, 1689, following the Revolution of the previous year, the Ministers and Messengers of the churches were able to meet in more peaceful times, thirty-seven of them, including all the most eminent Baptist ministers of the day, set their names to the recommendation with which it was circulated among the churches.  Thereafter for between 150 and 200 years it remained the definitive Confession of Faith of the Particular (or Calvinistic) Baptist churches of england and Wales.

Mr. Spurgeon did not, however, when he republished this Confession, merely preface it with certain words of general commendation.  He also addressed to his own church at New Park Street some practical words of advice as to how they should use the Confession.  These are still relevant today.

‘This little volume,’ he wrote, ‘is not issued as an authoritative rule, or code of faith, whereby you are to be fettered, but as an assistance to you in controversy, a confirmation in faith, and a means of edification in righteousness.  Here the younger members of our church will have a body of divinity in small compass, and by means of the scriptural proofs, will be ready to give a reason for the hope that is in them.

Be not ashamed of your faith; remember it is the ancient gospel of the martyrs, confessors, reformers, and saints.  Above all, it is the truth of God, against which all the gates of Hell cannot prevail.  Let your lives adorn your faith, let your example adorn your creed.  Above all live in Christ Jesus, and walk in Him, giving credence to no teaching but that which is manifestly approved of Him, and owned by the Holy Spirit.  Cleave fast to the Word of God which is here mapped out for you.’  This new edition of the Confession is sent out as a private venture by a small group of Baptists who are convinced that it has a message for this generation and believe its publication to be long overdue.  They hope it will achieve a wide circulation among the churches, and receive the close study which they believe it will richly repay.

In England during the 1630’s and the 1640’s Congregationalists and Baptists of Calvinistic persuasion emerged from the Church of England.  Their early existence was marked by repeated cycles of persecution at the hands of the established religion of crown and Parliament.  The infamous Clarendon Code was adopted in the 1660’s to crush all dissent from the official religion of the state.  Periods of rigorous application and intervals of relaxation of these coercive acts haunted Presbyterians, Congregationalists, and Baptists alike.

Presbyterians and Congregationalists suffered less than did Baptists under this harassment.  No little reason for their relative success in resisting government tyranny was their united front of doctrinal agreement.  All Presbyterians stood by their Westminster Confession of 1646.  Congregationalists adopted virtually the same articles of faith in the Savoy Confession of 1658.  Feeling their substantial unity with paedobaptists suffering under the same cruel injustice, Calvinistic Baptists met to publish their substantial harmony with them in doctrine.

A circular letter was sent to particular Baptist churches in England and Wales asking each assembly to send representatives to a meeting in London in 1677.  A confession consciously modeled after the Westminster Confession of Faith was approved and published.  It has ever since born the name of the Second London Confession.  The First London Confession had been issued by seven Baptist congregations of London in 1644.  That first document had been drawn up to distinguish newly organized Calvinistic Baptists from the Arminian Baptists and the Anabaptists.  Because this second London Confession was drawn up in dark hours of oppression, it was issued anonymously.

A preface to the original publication of 1677 says in part: “. . . It is now many years since diverse of us . . . did conceive ourselves under a necessity of publishing a Confession of our Faith, for the information and satisfaction of those that did not thoroughly understand what our principles were, of had entertained prejudices against our profession . . . This was first put forth about the year 1643, in the  name of seven congregations then gathered in London . . .”  (These early Baptists were conscious that the 1644 Calvinistic Baptist Confession predated the 1646 Presbyterian Confession and the 1658 Congregationalist Confession).

“Forasmuch as this confession is not now commonly to be had; and also that many others have since embraced the same truth which is owned therein; it was judged necessary by us to join together in giving a testimony to the world of our firm adhering to those wholesome principles . . .”

TABLE OF CONTENTS
FOREWORD
THE BAPTIST CONFESSION OF FAITH
ENDING STATEMENT AND SIGNATORIES
AN APPENDIX
Of the Holy Scriptures
Of God and the Holy Trinity
Of God's Decree
Of Creation
Of Divine Providence
Of the Fall of Man, of Sin, and of the Punishment Thereof
Of God's Covenant
Of Christ the Mediator
Of Free Will
Of Effectual Calling
Of Justification
Of Adoption
Of Sanctification
Of Saving Faith
Of Repentance unto Life and Salvation
Of Good Works
Of the Perseverance of the Saints
Of the Assurance of Grace and Salvation
Of the Law of God
Of the Gospel and the Extent of Grace Thereof
Of Christian Liberty and Liberty of Conscience
Of Religious Worship and the Sabbath Day
Of Lawful Oaths and Vows
Of the Civil Magistrate
Of Marriage
Of the Church
Of the Communion of Saints
Of Baptism and the Lord's Supper
Of Baptism
Of the Lord's Supper
Of the State of Man after Death, and of the Resurrection of the Dead
Of the Last Judgment