The Trinitarian Nature of Effectual Calling
Union with Christ Necessary in Order to Forsake Sin
The New Birth: How the Holy Spirit Brings Life and Enables Faith
7 Reasons God's Sovereignty Gives those in Christ Contentment in the Face of Adversity
Yielding to God's Providence
Ignorance, Unteachableness, Obstinacy and Carelessness Cannot be Conquered any Otherwise than by the Spirit of God
Does Effectual Grace Make Us Automatons?
Human Reason, Logic & Scientism
Monergism eBooks on Amazon in Kindle Format
Do Not Despise the Day of Small Beginnings

If Fallen Men Can Only Give Themselves to Evil, How Can God Still Condemn Them? 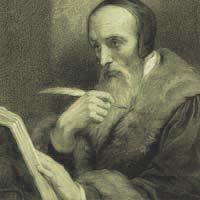 The following is an excerpt from Calvin's sermon on Ephesians 2:3-6

...in order that men (who are always subtle minded in seeking some way of escape or other) should not excuse themselves for being under the tyranny of the devil, not allege that the same ought not be laid to their charge, St. Paul shows that said bondage does not cease to be willful. I showed you earlier that in spite of all our free [voluntary] choice, and despite our reason and will, yet we are, as it were, fettered to Satan's service, so that we can do nothing at all but evil, neither should we be any better by nature than the worst thieves in the world, if God had not had pity on us. Thus does St. Paul set forth all other men to us as a mirror, even such as despise God and all order and are driven by Satan in complete rage, saying that we should be like them if God had not been merciful to us. But now there are many who murmur against God, and who bring an action against him, saying, if free will is cast down, what will become of us? If men were able to give themselves to goodness and yet, nevertheless, did not do so, but gave themselves to evil, surely it would be perfectly right and reasonable that they should be regarded as guilty. But if they cannot do ought else but evil, why should God condemn them? Surely at least they ought to be absolved, seeing it is clear that they are held under Satan's dominion, even from their mother's womb. Such is what many men plead in the hope of washing their hands of the matter. And they are not even contented with justifying themselves by empty subterfuges, but they also rail against God, as though he were the cause of their damnation.

But St. Paul, to prevent such slanders, says that they who are under the bondage of Satan and sin, do not cease for all that to be condemned with good reason For they are not constrained to sin by force. They are subject indeed, but it is willfully so. And that is the reason why he says that even such as are brought back again to our Lord Jesus Christ, 'have walked in the lusts of the flesh'; that is to say, that before God had changed them and brought them to obey him by his Holy Spirit, they walked in their own wicked lusts. It is true that men will grant their nature to be sinful, but yet they say it is sufficient that the will be otherwise. All men will grant that it is the will which puts the difference between vice and virtue. But when the philosophers spoke in that way, they were of the opinion that we have a genuine free will.And that is the thing that deceived them, because they did not know that we were marred by the fall of Adam, and yet nevertheless do not cease to be justly accursed, since our offending of God is of our own accord. And so, he adds again, 'doing the desires of our flesh and of or thoughts'. As if he should say that they which are possessed of Satan and held under the slavery of sin, cannot pleas any compulsion. Why? If is their own will that drives them to it. Thus you see, in effect, how St. Paul means to stop the mouths of all slanderers, in order that men should not pick any quarrels with God by pretending they they ought not to be ruined by reason of their sinfulness, seeing that they are subject to it by nature.

...the determinate sentence of the Holy Spirit is ... that we are not only sick, but also dead until we are raised again by Jesus Christ....So then let us on the one hand acknowledge ourselves guilty, assuring ourselves that we were justly robbed of all God's graces in the person of Adam; and again, on the other hand, let us not make the same an excuse, in the hope of escaping by such covering up, as if we were not the bondslaves of sin, nor we ourselves in any sense to blame for it, because we are held down by Satan's snares and shackles even from our birth. But it behooves us to consider always that each one of us will find the source of his disease in his own conscience. Men may plead as much as they desire, but if they examine themselves and question their own consciences, you shall see them condemned, confounded, and quite unable to answer.

When a man has babbled all he may, so that he thinks he has established his case by saying he has no free will of his own, nor ability to resist God, no more is needed but his one word - what, in your opinion is the thing which provokes you to evil? Of, it is the devil. You say well. But yet consider for a moment whether that does so fully excuse you, since you do not very clearly perceive that you were stirred up and driven to it by your own impulse. Do you not know that the source and root of the mischief is in yourself? When you are so rebellious against God that your thoughts are full of falsehood and unbelief, and that so much the more, because your lusts are unbridled and embattled against God and his righteousness, even to make war with him, - when you see all this, must you debate with his further? So then, let us not seek any subterfuges, seeing we carry a sufficient judge with us, even within us, namely, seeing that conscience in every one of us rebukes us. That is what St. Paul aimed at in this passage. And thereby we are also warned not to arrogate anything at all to ourselves, but to bridle all our senses and imaginations, and all the understanding and reason we pride ourselves on having. For until we have so renounced ourselves, it is certain we shall never be fit to apply ourselves to the service of God.

St. Paul says expressly that those whom God has quickened are by that means made one with our Lord Jesus Christ, for it is even in him they have their life.

“"...we must not suppose that any one of us has anything with which to please God more than his fellow man, nor presume to hold any good opinion of ourselves. Instead we must always go to the fountain that cannot be drained dry...we must draw from the love of our God and confess that it cannot be that God should be persuaded or moved from that which is outside Himself, but only that it pleased him to love us freely by receiving us to himself and by enlightening us with his Holy Spirit in the faith of the gospel ... ... even those whom men would deem to be the most excellent, can bring forward nothing of which to boast or with which to purchase themselves esteem before God, but are all received in grace to be made heirs of the heavenly life by means of our Lord Jesus Christ.” Calvin, Sermons on Ephesians, pg. 146, Ephesians 2:3-6

From Sermons on Ephesians by John Calvin

An Open Letter to the Prayerless Church
Paul Miller
The Most Important Paragraph in Human History
Andrew Naselli
Francis Turretin and His Love for Biblical Truth
Simonetta Carr
The Trinitarian Nature of Effectual Calling
Reformation Theology
Union with Christ Necessary in Order to Forsake Sin
Reformation Theology
The New Birth: How the Holy Spirit Brings Life and Enables Faith
Reformation Theology
The Bible Warns of the Dangers of Unchecked Concentrated Government Power
Reformed Study
Doctrine
Chad Van Dixhoorn
The Bible’s Conflict-Free Creation Story
Matthew Miller
Salvation and Receiving Mercy
Kevin Gardner
7 Reasons God's Sovereignty Gives those in Christ Contentment in the Face of Adversity
Monergism Answers
The illusion of digital community
Samuel James
Good Leaders Are Easy to Follow: How Shepherds Shape the Sheep
Steven Lee
Will God Provide for Your Needs?
Mr Garrett Kell
Lazy Christian is an Oxymoron
Costi Hinn
Lawful Love: How the Law Preserves and Propels Our Love
David Schrock
The Hostility of Loving Your Neighbor
Curated Resources
For The Kids Nobody Wants: Imagine There’s No Children
David Schrock
He Tailors Your Trials: How God Fits Your Afflictions Just For You
Curated Resources
Techno-Slavery: Being Ruled by Devices
Curated Resources
No Such Thing as “Little Sins.”
Kendall Lankford
10 Reasons to Host a Pastor Story Hour
Kendall Lankford
John Witherspoon and Slavery
Kevin DeYoung
Four Tips for Communicating the Gospel to Roman Catholics
Leonardo De Chirico
Where's Sola Scriptura In Scripture? - Luke 1:5-25
John Samson
Is Genesis Just One of the Many Creation Myths?
John Stonestreet
The Way to True Peace and Rest (eBook)
Robert Bruce
The Meaning Of Sola Scriptura - 2 Timothy 3:16-17 (MP3)
John Samson
How the Golden Chain Gives Us Missiological Confidence
Curated Resources
Put Not Your Trust in Princes -- An Exposition of Psalm 146
Kim Riddlebarger
Promises: God Hears Your Prayers
Zack Groff
The Regulative Principle and the Corporate Recitation of Creeds
Samuel G. Parkison
Seven Occasions for Fasting
Zack Groff
FBC Jax Speaks the Truth in Love about Sexuality
Denny Burk
Why We Reread the Bible
Ryan Higginbottom
Against Autonomy
T. M. Suffield
10 Practices to Kill Pride
Gavin Ortlund
Who Killed the Prayer Meeting?
Paul Miller
An Antidote to Spiritual Amnesia
Rev David P Murray
You’re a Pastor, Not a Therapist
Jeremy Pierre
What Christians Can Learn from Secular Humanism
John Stonestreet
A Nation of Biblical Illiterates
Thaddeus Williams
Calvin on the Authority of Scripture
Curated Resources
How Patient Is God With Us?
Nicholas T Batzig
The Classical Doctrine of God
James Dolezal, Dr Sinclair B Ferguson
What does the Bethel movement teach?
Costi Hinn
With Reverence and Awe (and Kids)
Curated Resources
We Live in Babylon, Not Israel
Marvin Olasky
What does it mean to present our bodies as a living sacrifice to God (Rom. 12:1)?
Dr Harry L Reeder III
What to do Before you Read the Bible
Curated Resources