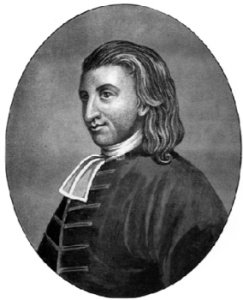 This will be evident from the following particulars:

1. The world could not make itself; for this would imply a horrid contradiction, namely, that the world was before it was; for the cause must always be before its effect. That which is not in being, can have no production; for nothing can act before it exists. As nothing hath no existence, so it hath no operation. There must therefore be something of real existence, to give a being to those things that are; and every second cause must be an effect of some other before it be a cause. To be and not to be at the same time, is a manifest contradiction, which would infallibly take place if any thing made itself. That which makes is always before that which is made, as is obvious to the most illiterate peasant. If the world were a creator, it must be before itself as a creature.

2. The production of the world could not be by chance. It was indeed the extravagant fancy of some ancient philosophers, that the original of the world was from a fortuitous concourse of atoms, which were in perpetual motion in an immense space, till at last a sufficient number of them met in such a happy conjunction as formed the universe in the beautiful order in which we now behold it. But it is amazingly strange how such a wild opinion, which can never be reconciled with reason, could ever find any entertainment in a human mind. Can any man rationally conceive, that a confused rout of atoms, of diverse natures and forms, and some so far distant from others, should ever meet in such a fortunate manner, as to form an entire world, so vast in the bigness, so distinct in the order, so united in the diversities of natures, so regular in the variety of changes, and so beautiful in the whole composure? Such an extravagant fancy as this can only possess the thoughts of a disordered brain.

3. God created all things, the world, and all the creatures that belong to it. He attributes this work to himself, as one of the peculiar glories of his Deity, exclusive of all the creatures. So we read, Isa. xliv. 24. 'I am the Lord that maketh all things; that stretcheth forth the heavens alone; that spreadeth abroad the earth by myself.' Chap. xlv. 12. 'I have made the earth, and created man upon it; I, even my hands, have stretched out the heavens, and all their host have I commanded. Chap. xl. 12, 13. 'Who hath measured the waters in the hollow of his hand? and meted out heaven with the span, and comprehended the dust of the earth in a measure, and weighed the mountains in scales, and the hills in a balance? Who hath directed the Spirit of the Lord, or being his counsellor hath taught him? Job ix. 8. 'Which alone spreadeth out the heavens, and treadeth upon the waves of the sea. These are magnificent descriptions of the creating power of God, and exceed every thing of the kind that hath been attempted by the pens of the greatest sages of antiquity. By this operation God is distinguished from all the false gods and fictitious deities which the blinded nations adored, and shows himself to be the true God. Jer. x. 11, 12. ' The gods that have not made the heavens and the earth, even they shall perish from the earth, and from under these heavens. He hath made the earth by his power, he hath established the world by his wisdom, and hath stretched out the heavens by his discretion.' Psal. xcvi. 5. 'All the gods of the nations are idols: but the Lord made the heavens.' Isa. xxxvii. 19. 'Thou art the God, even thou alone, of all the kingdoms of the earth: thou hast made heaven and earth.' None could make the world but God, because creation is a work of infinite power, and could not be produced by any finite cause: For the distance between being and not being is truly infinite, which could not be removed by any finite agent, or the activity of all finite agents united.

This work of creation is common to all the three persons in the adorable Trinity. The Father is described in scripture as the Creator, 1 Cor. viii. 6. – 'The Father, of whom are all things.' The same prerogative belongs to the Son, John i. 3. 'All things were made by him' the Word, the Son; 'and without him was not any thing made that was made.' The same honour belongs to the Holy Ghost, as Job xxvi. 13. 'By his Spirit he hath garnished the heavens.' Chap. xxxiii. 4. 'The Spirit of God hath made me, says Elihu, and the breath of the Almighty hath given me life.' All the three persons are one God; God is the Creator; and therefore all the external works and acts of the one God must be common to the three persons. Hence, when the work of creation is ascribed to the Father, neither the Son nor the Holy Spirit are excluded; but because, as the Father is the fountain of the Deity, so he is the fountain of divine works. The Father created from himself by the Son and the Spirit; the Son from the Father by the Spirit; and the Spirit from the Father and the Son; the manner or order of their working being according to the order of their subsisting. The matter may be conceived as thus: All the three persons being one God, possessed of the same infinite perfections; the Father, the first in subsistence, willed the work of creation to be done by his authority: 'He spake, and it was done; he commanded, and it stood fast.' – In respect of immediate operation, it peculiarly belonged to the Son. For 'the Father created all things by Jesus Christ,' Eph. iii. 9. And we are told, that 'all things were made by him,' John iii. 3. This work in regard of disposition and ornament, doth particularly belong to the Holy Ghost. So it is said, Gen. i. 2. 'The Spirit of God moved upon the face of the waters,' to garnish and adorn the world, after the matter of it was formed. Thus it is also said, Job xxvi. 13. above cited, 'By his Spirit he hath garnished the heavens.'
-----

From The Beauties of Thomas Boston

Covenant Theology: Understanding God’s commitment to us has implications for our security, gratitude, and service
Dr J Ligon Duncan III, Richard Belcher, J V Fesko
Warnings Against Apostasy II
Michael J Kruger
Warnings Against Apostasy I
Michael J Kruger
Warnings Against Apostasy (Again)
Michael J Kruger
The Cure for Apostasy
Michael J Kruger
What is the gospel according to Abraham?
J. Nicholas Reid
Humble Yourself — Like God The Power of Christ’s Lowliness
David Mathis
Introducing the ‘Institutes’ A Guide to Reading Calvin’s Classic
Shawn Wright
A Covenantal Benediction
Dr J Ligon Duncan III
A Biblical Approach to Protest
Carl Ellis
The Council of Nicaea did not create the canon of Scripture
John D. Meade
Would Someone Tell Me What 2 Thessalonians 2 Means?!
Guy Waters
How to Stop Being Afraid of People, So You Can Start Getting Stuff Done
Reagan Rose
Should I Preach Without Notes?
Kevin DeYoung
Why White Fragility Fails
Denny Burk
Do we matter to God? (5-Part MP3 Series)
Dick Lucas
Words of comfort on knowing God (4-Part MP3 Series)
Dick Lucas
A Collection of the Promises of the Gospel (eBook)
John Colquhoun
The Happiest Place in the Universe
D. Blair Smith
The Suffering of Joseph and Jesus
Jonty Rhodes
What is the relationship of our Salvation with Repentance?
Mike Ratliff
How Did God Call Me to Himself?
John Piper
The World’s Easiest Theological Question
Michael J Kruger
Is the Evangelical Movement Really "Evangelical"?
Dr. John MacArthur
Christ Our Righteousness
Adoring God
Why Progressive Christianity Can’t Bring Reformation
Alisa Childers
When It Comes to Sacrifice, God Doesn’t Play Fair
Derek Rishmawy
Demonology 101
Eowyn Stoddard
Critical Theory Seeks To Suppress Dissent In America
R Scott Clark
4 Questions about the Trinity
Scott Swain
Help! I’m Struggling with the Doctrine of Predestination
Joel R Beeke
"More Than Conquerors" -- Romans 8:31-39
Kim Riddlebarger
You Are Not Your Own (Living as Slaves of Christ)
Sam Storms
The Believer’s Armor
Mike Ratliff
The Myth of Self-Esteem
Mark Loughridge
He Died to Have Her: The Stubborn Love of Definite Atonement
Marshall Segal
Mastered by Matchless Love: The Sweet Experience of Irresistible Grace
Dr Sinclair B Ferguson
The Great Contribution of the Reformation
Michael Reeves
The Wisdom of Restraining our Lips
Lara d’Entremont
Self-Centered Discipleship – A Challenge to Deep Discipleship
Curated Resources
Pastor to Pastor
Nicholas T Batzig
Do All Religions Worship the Same God?
Stephen J Nichols
Why Was the Reformation Necessary?
W Robert Godfrey
Men, Be the Chief Repenters in Your Homes
Dave Jenkins
Dick Lucas (MP3 Resources by Series)
Curated Resources
Types of the Messiah
Jonathan Edwards
3 Distinguishing Characteristics of a True Church
Conrad Mbewe
10 Key Verses on Hardship
ESV Bible
6 Things to Look for in a Pastor
Mark Dever
Try This Simple, Three-Step Maneuver When You’re Hit with a Barrage of Objections
Greg Koukl