The God’s Big Picture Bible is a FREE online curriculum on biblical theology which traces the story of the whole Bible from Genesis to Revelation to see how it all fits together, telling of God’s wonderful plan to save the world through Jesus Christ. Each unit contains a video, an outline, a bible study guide, leaders notes and a reading assignment from the book.

To download all the video and print resources for this course, click here. (zip file) HT: Clayton TV

God's Big Picture Unit 1: The Pattern of the Kingdom - Genesis 1-2 (YouTube),
Bible Study and Leaders Guide (.pdf)
The Bible isn't just a random collection of books but one connected story and it is vital to understand it in that context. This first video explains that the Bible has one author: God, one subject: Jesus Christ and one overarching theme: God's plan to save the world through his son Jesus Christ.

We begin to look at this unfolding story in Genesis, the first book of the Bible, which sets up the pattern of God's kingdom that we will trace through the rest of the units. We see that in God's perfect created order, God's People, Adam and Eve, live in God's Place, the Garden of Eden, and enjoy his Rule and Blessing. In this creation the relationships between God & man, man & woman and mankind & creation are perfect, just as they were supposed to be. But it doesn't last long...

God's Big Picture Unit 2: The Perished Kingdom - Genesis 3 (YouTube),
Bible Study and Leader's Guide (.pdf)
God's perfect creation is all too quickly ruined. In this episode we consider the question of evil, the tactics of the Devil who wants people to distrust and disobey God and the sinfulness of human hearts.

As we read more of Genesis we see that God's people, Adam and Eve, disobey God, reject his rule and suffer the dire consequences. Once they have turned their back on God he must turn his back on them. Relationships are broken and God's people suffer the just curses of a fallen world. Sin and death infect the whole of creation. God's people deserve judgment but in God's grace this isn't where the story ends...

God's Big Picture Unit 3: The Promised Kingdom - Genesis 12 (YouTube)
Bible Study and Leader's Guide (.pdf)
It looks like it's all gone wrong but in unit 3 we learn that God has an eternal plan to save his people and restore his perfect creation. Reading on in Genesis we see that God, in his amazing grace, is going to send a saviour to rescue his fallen people. He then makes a foundational covenant or promise with one man, Abraham, which has implications for the rest of history. God promises to make himself a people through Abraham, to bring his people to a place and to bless them. As we see more of human sin and weakness we also see more and more of God's grace and we realise God's people cannot save themselves. Only God can save.

But questions abound... How will he make a people from an elderly, barren couple? Where is this land? And how can he restore the perfect relationships of creation?

God's Big Picture Unit 4: The Partial Kingdom - People and Blessing - Genesis 12 - Leviticus (YouTube)
Bible Study and Leader's Guide (.pdf)
God's covenant promises of unit 3 are beginning to be worked out. In Genesis 12 - Exodus 18 we see how God begins to make a people for himself by miraculously granting Abraham and Sarah children and then many descendants. We see again and again that evil, unworthy persons become God's people and it becomes clear that it is God who saves and that no man can boast.

We see how God resuces his people from slavery in Egypt by substitution, by conquest and by defeating their enemies. Once freed from slavery God begins to bless his people by giving them his law and by living amongst them. Things are begining to look up, but there is much more to be fulfilled.

God's Big Picture Unit 5: The Partial Kingdom - Land and King - Numbers - 2 Chronicles (YouTube)
Bible Study and Leader's Guide (.pdf)
Having seen the 'people' and 'blessing' promises partially fulfilled we're now looking out for the promsie of 'land' to be fulfilled. But, because of further disobedience, we read in the book of Numbers that God's people are delayed forty years in getting into the land he has promised them. Once in the land things don't get much better: the nation descends into a cycle of sin, judgment and grace. God provides judges to rule his people.

Perhaps God's people would do better if they had a king to rule over them? In 1 Samuel - 2 Chronicles God's promise of a king is seemingly fulfilled by Saul, David and then Solomon. The last two kings bring great periods of peace and prosperity to Israel, but ultimately each one fails to bring the everlasting peace and kingdom that God has promised. We conclude that these partially fulfilled promises must be pointing to something greater.

God's Big Picture Unit 6: The Prophesied Kingdom  -1 Kings - Malachi (YouTube)
Bible Study and Leader's Guide (.pdf)
Israel's history takes a downward turn as the people continue to disobey. They are exiled from the promised land, they become a scattered fragmented people and are left facing God's judgment rather than blessing. But in his grace God sends prophets to speak his word to his people and enforce his covenant.

This unit maps the various prophets found in the Old Testament, all bringing a message of judgment and hope. Speaking God's words and not their own, the prophets stress that God's people will face judgment if they continue to disobey, but the prophets also bring a wonderful message of hope: God will keep his promise to bless his people. Most excitingly they prophesy of a new hope and a glorious, perfect King who will rule God's people forever - that is of course, Jesus Christ. We're left at the end of this unit eagerly looking for the arrival of true God's King.

God's Big Picture Unit 7: The Present Kingdom  -The Gospels (YouTube)
Bible Study and Leader's Guide (.pdf)
Finally all of God's promises are fulfilled! Here we truly see how the whole of the Bible fits together. God's promised king arrives to save God's people - Jesus is born. This unit shows how each of the four gospels (Matthew, Mark, Luke and John) give complementary accounts of Jesus' life and teachings, each concluding that Jesus is the Messiah, the saviour of God's people and the fulfilment of all the Old Testament promises. We see how Jesus is God's people, place, rule and blessing and what each of these promises means for the believer.

Most importantly this unit describes the way in which Jesus saves God's people through substitution, by taking the punishment they deserve, so that God's people can be restored to perfect relationship with him. There is a tension that remains however because the presence of sin remains...

God's Big Picture Unit 8: The Proclaimed Kingdom - Acts - Jude (YouTube)
Bible Study and Leader's Guide (.pdf)
Jesus' kingdom is both 'now' and 'not yet'. This unit explains that we live in the 'last days' between Jesus' first and second comings. God is patiently waiting for more people to come into his kingdom before he sends Jesus back to wrap everything up. As we move on to the book of Acts we see that to accomplish the task of making a great people for himself God sends his Holy Spirit into Christians so they can tell others of Jesus.

We learn that the Holy Spirit brings about new birth, he equips believers to serve Christ and he produces holiness. Though believers have been wonderfully saved God does not promise an easy life now, rather suffering is to be expected. Believers are to persevere in holiness and in spreading the gospel, by looking forward to the glorious, eternal future when sin and death will be no more.

God's Big Picture Unit 9: The Perfected Kingdom - Revelation (YouTube)
Bible Study and Leader's Guide (.pdf)
The end of evil and the beginning of eternity: the final book of the Bible, Revelation, is a series of visions given to the apostle John which conveys a message through symbols to strengthen believers.

There is a vision of a lamb on a throne in Heaven which encourages believers to know that though this world is full of evil there is someone in charge, Jesus, who gave his life for his people. Next there is a series of visions of seals, trumpets and bowls which depict the warmongering, economic instability and death that will mark every age until Christ returns. Then there is the final judgment when all evil and opposition to God will be totally and finally destroyed. And finally, there is the glorious picture of the new creation; God's perfect kingdom where there will be no sin, or sadness or death.

We see how God's promise to Abraham is fully and finally fulfilled: God's people from all nations will live in God's place, the new creation, and enjoy his rule and the blessing of his presence eternally. So we pray 'Come Lord Jesus' and while we wait ask for 'the grace of the Lord be with God's people Amen'. 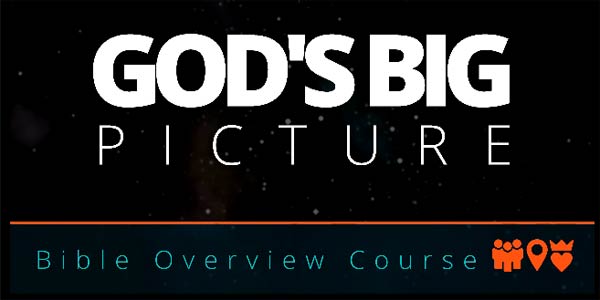