Faith as an Overcomer 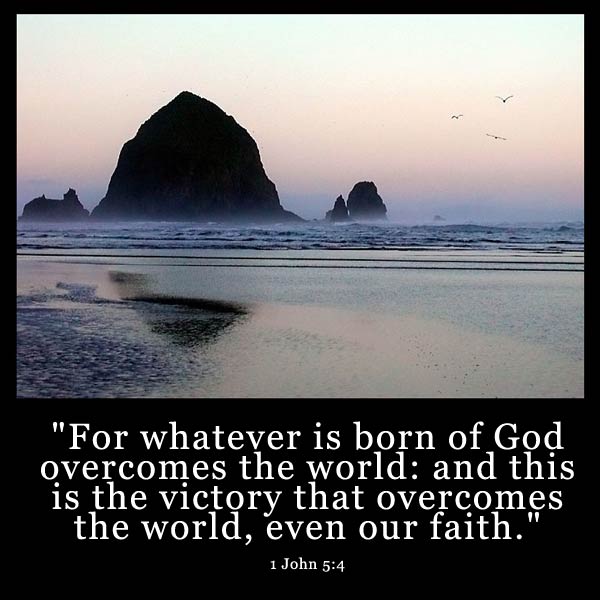 Four questions call for answer: Why "whatever" rather than "whoever"? What is "the world" which is to be overcome? How does faith overcome it? What is the extent of its victory? The people spoken of are the regenerate, and "whatever" is used because it takes in whatever may be their station or situation in this life. Whoever is born of God, no matter what his rank or situation, "overcomes the world." Regeneration is wrought equal and alike in all, and it produces the same fruits and effects in all—as it respects the essentials of godliness. It is not drawn forth into exercise and act in all alike, for there are particular duties to be performed and particular graces to be exercised—according to such times and places as are personal—but not universal—as, for example, one called to endure martyrdom. But "whatever [person] is born of God [no matter how distinguished from others by His providence] overcomes the world."

The "world" is a term which is used in Scripture with many shades of meaning. Sometimes it means the earth; at others, the Church of Christ; at others, empty professors. When used in an ethical or religious sense, it denotes that system over which Satan presides as "prince" (John 14:30) or as "god" (2 Corinthians 4:4), the supreme director of all false religions. Since there is nothing which the Devil hates so much as the Gospel, his main activities are engaged in the corrupting of it, in deceiving souls by plausible counterfeits. But that "faith" in Christ and His salvation—as results from a Scriptural knowledge of Him, imparted to the spiritual mind by the light and teaching of the Holy Spirit—sees through Satan's imitations. Only by a believing reception of the Truth, can error be overcome. One of the fruits of the new birth—then, is a faith which not only enables its possessor to overcome the sensual and sinful customs, and the carnal maxims and policies by which the profane world is regulated—but also the lying delusions and errors by which the professing world is fatally deceived.

1 John 5:4 opens with "For," which intimates the reason why that to the regenerate the commandments of God "are not grievous" (1 John 5:3); so in this verse, "the world" signifies whatever has the effect of rendering the Divine precepts distasteful to men. The "world" is in direct antagonism to God and His people, and we may detect its presence and identify it with certainty by perceiving the effect it produces on our hearts in this way: The world is that which ministers to the carnal nature—be it people or things—and which tends to render obedience to God irksome and unpleasant. Any one or any thing which draws your heart away from God and His authority, is for you "the world." Whatever lessens your estimate of Christ and heavenly things, and hinders practical piety is, for you, "the world"—be it the cares of this life, riches, receiving honor from men, social prestige and pomp, the fear of man lest you be dubbed "peculiar" or "fanatical" is, for you, "the world"—and either you overcome it, or it will fatally overcome you.

Now, the only thing which will or can "overcome the world" is a God-given—but self-exercised faith.

And faith overcomes the world, first, by receiving into the heart God's infallible testimony of the same. He declares that "the world" is a corrupt, evanescent, hostile thing, which shall yet be destroyed by Him. His Holy Word teaches that the world is "evil" (Galatians 1:4), that "all that is in the world, the lust of the flesh, and the lust of the eyes, and the pride of life, is not of the Father—but is of the world" (1 John 2:16), that "the whole world lies in wickedness" (1 John 5:19) and shall yet be "burned up" (2 Peter 3:10). As faith accepts God's verdict of it, the mind is spiritually enlightened; and its possessor views it as a worthless, dangerous, and detestable thing.

Faith overcomes the world secondly, by obeying the Divine commands concerning it, God has bidden us, "Do not be conformed to this world" (Romans 12:2), "Do not love the world, neither the things that are in the world" (1 John 2:15), and warns us that "Anyone who chooses to be a friend of the world, becomes an enemy of God." (James 4:4). By heeding the Divine precepts, its spell over the heart is broken.

Faith overcomes the world thirdly, by occupying the soul with more glorious, soul-delighting and satisfying objects. We often hear and see 2 Corinthians 4:16 or 17 quoted—but rarely the explanatory words which follow. The daily renewing of the inner man and our afflictions working for us an eternal weight of glory are qualified by: "While we look not at the things which are seen—but at the things which are not seen: for the things which are seen are temporal; but the things which are not seen are eternal" (2 Corinthians 4:18). The more the substance of the heavenly world engages the heart, the less hold will the shadows of this earthly world have upon it. Thus, faith wrought in the saints of old: "You accepted the confiscation of your property, because you knew that you yourselves had better and lasting possessions" (Hebrews 10:34). "By faith he made his home in the promised land like a stranger in a foreign country; he lived in tents, as did Isaac and Jacob, who were heirs with him of the same promise. For he was looking forward to the city with foundations, whose architect and builder is God" (Hebrews 11:9-10).

Faith overcomes the world, fourthly, by drawing out the heart unto Christ. As it was by fleeing to Him for refuge, that the soul was first delivered from the power and thraldom of this world, so it is throughout the Christian life. The more we cultivate real communion with Christ, the less attraction will the baubles of this world have for us! The strength of temptation lies entirely in the bent of our affections, "for where your treasure is, there will your heart be also" (Matthew 6:21). While Christ is beheld as "the chief among ten thousand" (Song 5:10) as "altogether lovely" (Song 5:16), the things which charm the poor worldling—will repel us.

Moreover, as faith beholds in the mirror of the Word, the "glory of the Lord," the soul itself is "changed into the same image from glory to glory, even as by the Spirit of the Lord" (2 Corinthians 3:18). The world gains the victory over the unregenerate by captivating their affections and capturing their wills; but the Christian overcomes the world, because his affections are set upon Christ and his will yielded to Him.

What is the extent of the Christian's victory? Through temporary weakness of faith, he may neglect the means of grace and fall into sin—yet his soul will be so wretched that he will return to Christ for cleansing and fresh supplies of grace.

"Though the conflict of grace with corrupt nature, and the attractions and terrors of the world, is often very sharp, and though regenerate men may be baffled, cast down, and appear slain in the battle; yet the Divine life within him, being invigorated by the Holy Spirit, will again excite him to arise and renew the conflict with redoubled fortitude and resolution; so that at length, the victory will be his decidedly" (Thomas Scott, 1747-1821). The life of faith is a "fight" (1 Timothy 6:12), a warfare in which there are no furloughs or "vacations," and our success therein depends upon renouncing our own strength, and counting solely on the sufficiency of Christ's grace.

Here—then, we have a sure criterion by which we may determine our Christian progress or spiritual growth. If the things of this world have a decreasing power over me—then my faith is becoming stronger. If I am holding more lightly the things most prized by the ungodly—then I must be increasing in an experimental and soul-satisfying knowledge of Christ. If I am less cast down when some of the riches and comforts of this world are taken from me—then that is evidence they have less hold upon me. If I find the company of the most cultured and charming worldlings have a dampening effect upon my spirit, and I am happy when relieved of their presence—then my faith is overcoming the world.

Yet the tense of the verb must not be overlooked: Faith which "overcomes the world" (1 John 5:4), not which "has overcome." So far from being an immediate achievement, it is a lifelong business, a prolonged and continuous strife.

"O may my heart be occupied,
So wholly, Lord, with Thee,
That with Your beauty satisfied,
I elsewhere none may see."