An Exposition on the First Ten Chapters of Genesis (eBook) 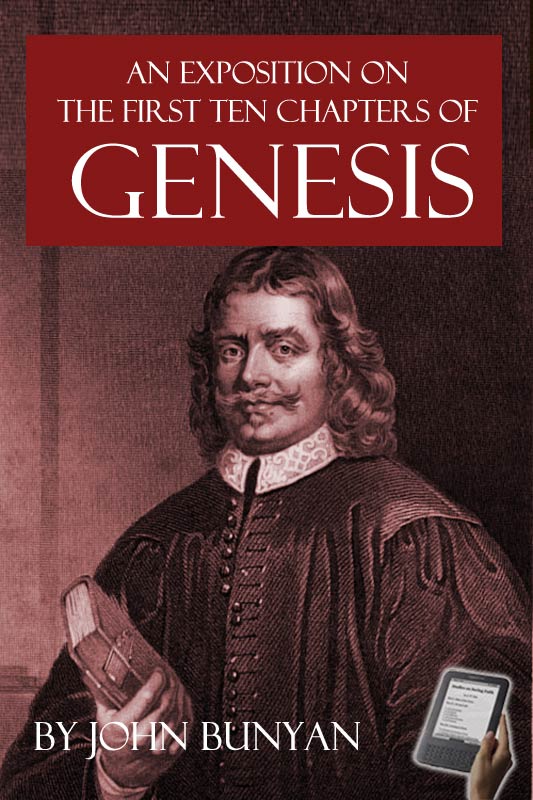 First published in 1691, by Charles Doe. An unfinished commentary on the Bible, found among John Bunyan's papers after his death, in his own handwriting.

Being in company with an enlightened society of Protestant dissenters of the Baptist denomination, I observed to a doctor of divinity, who was advancing towards his seventieth year, that my time had been delightfully engaged with John Bunyan's commentary on Genesis. "What," said the D.D., with some appearance of incredulity, "Bunyan a commentator—upon Genesis!! Impossible! Well, I never heard of that work of the good Bunyan before. Why, where is it to be found?" Yes, it is true that he has commented on that portion of sacred scripture, containing the cosmogony of creation—the fall of man—the first murder—the deluge—and other facts which have puzzled the most learned men of every age; and he has proved to be more learned than all others in his spiritual perceptions. He graduated at a higher university—a university unshackled by human laws, conventional feelings, and preconceived opinions.

His intense study of the Bible, guided by the teaching of the Holy Spirit, enabled him to throw a new and beautiful light upon objects which are otherwise obscure. Oh! that young ministers, while attaining valuable book learning, may see the necessity of taking a high degree in, and of never forgetting this Bible university! Reader, is it not surprizing, that such a treatise should have remained comparatively hidden for more than one hundred and fifty years. It has been reprinted in many editions of Bunyan's works: but in all, except the first, with the omission of the scripture references; and with errors of so serious a character as if it was not intended to be read. Even in printing the text of Genesis 7:7 Noah's three sons do not enter the ark! although in 8:16 they are commanded to go forth out of the ark. It is now presented to the public exactly as the author left it, with the addition of notes, which it is hoped will illustrate and not encumber the text.

This exposition is evidently the result of long and earnest study of the holy scriptures. It is the history of the creation and of the flood explained and spiritualized, and had it been originally published in that form and under a proper title, it would most probably have become a very popular work. The author's qualifications for writing this commentary were exclusively limited to his knowledge of holy writ. To book learning he makes no pretensions. He tells us that in his youth "God put it into my parents" hearts to put me to school, to learn to read and write as other poor men's children; though, to my shame, I confess, I did soon lose that little I learnt even almost utterly." In after life, his time was occupied in obtaining a livelihood by labour. When enduring severe mental conflicts, and while he maintained his family by the work of his hands, he was an acceptable pastor, and extensively useful in itinerant labours of love in the villages round Bedford. His humility, when he had used three common Latin words, prompted him to say in the margin, "The Latine I borrow."

And this unlettered mechanic, when he might have improved himself in book wisdom, was shut up within the walls of a prison for nearly thirteen years, for obeying God, only solaced with his Bible and Fox's Book of Martyrs. Yet he made discoveries relative to the creation, which have been very recently again published by a learned philosopher, who surprised and puzzled the world with his vestiges of creation. Omitting the fanciful theories of the vestige philosopher, his two great facts, proved by geological discoveries, are—

I. That when the world was created and set in motion, it was upon principles by which it is impelled on to perfection—a state of irresistible progress in improvement. This is the theory of Moses: and Bunyan's exposition is, that all was finished, even to the creation of all the souls which were to animate the human race, and then God rested from his work.

II. The second geological discovery is that the world was far advanced towards perfection producing all that was needful for human life, before man was created. Upon this subject, Bunyan's words are—"God shews his respect to this excellent creature, in that he first provideth for him before he giveth him his being. He bringeth him not to an empty house, but to one well furnished with all kind of necessaries, having beautified the heaven and the earth with glory, and all sorts of nourishment for his pleasure and sustenance." But the most pious penetration is exhibited in the spiritualizing of the creation and of the flood—every step produces some type of that new creation, or regeneration, without which no soul can be fitted for heaven. The dim twilight before the natural sun was made, is typical of the state of those who believed before Christ, the Sun of righteousness, arose and was manifested. The fixed stars are emblems of the church, whose members all shine, but with different degrees of lustre—sometimes eclipsed, and at others mistaken for transient meteors.

The whales and lions are figures of great persecutors. But the most singular idea of all is, that the moral degradation of human nature before the flood, was occasioned by hypocrisy and persecution for conscience sake, arising from governors interfering with matters of faith and worship; in fact, that a STATE CHURCH occasioned the deluge— and since that time has been the fruitful source of the miseries and wretchedness that has afflicted mankind. His prediction of the outpouring of the Spirit in the conversion of sinners, when the church shall be no longer enthralled and persecuted by the state, is remarkable. "O thou church of God in England, which art now upon the waves of affliction and temptation, when thou comest out of the furnace, if thou come out at the bidding of God, there shall come out with thee, the fowl, the beast, and abundance of creeping things. O Judah, he hath set an harvest for thee, when I returned the captivity of my people." May this prediction soon be verified, and the temporal government no longer vex and torment the church by interfering with spiritual things.

It is remarkable that of the vast number of pious and enlightened mechanics who adorn this country and feed its prosperity, so few read the extraordinary writings of John Bunyan, a brother mechanic; for with the exception of the Pilgrim's Progress and Holy War, they are comparatively little known. His simple but illustrative commentary—his book of Antichrist—his solemn and striking treatise on the resurrection and final judgment—in fact, all his works, are peculiarly calculated to inform the minds of the millions—to reform bad habits, and, under the divine blessing, to purify the soul with that heavenly wisdom which has in it the promise of the life that now is as well as of that which is to come. It is also a fact which ought to be generally known, that those preachers who have edited Bunyan's works and have drunk into his spirit, have been most eminently blessed in their ministry; Wilson, Whitefield, and Ryland, can never be forgotten. If the thousands of godly preachers who are scattered over our comparatively happy island were to take Bunyan's mode of expounding scripture as their pattern, it would increase their usefulness, and consequently their happiness, in the great work of proclaiming and enforcing the doctrines of the gospel.

CHAPTER III - "Now the serpent was more subtil than any beast of the field..."

CHAPTER IV - "And Adam knew Eve his wife; and she conceived..."

CHAPTER V - "This is the book of the generations of Adam..."

CHAPTER VI - "And it came to pass, when men began to multiply..."

CHAPTER VII - "And the Lord said unto Noah, Come thou and all thy house into the ark..."

CHAPTER VIII - "And God remembered Noah, and every living thing..."

CHAPTER IX "And God blessed Noah, and his sons..."

CHAPTER X - "Now these are the generations of the sons of Noah..."

CHAPTER XI - "And the whole earth was of one language..."