The Excellency of Heavenly Treasures (eBook) 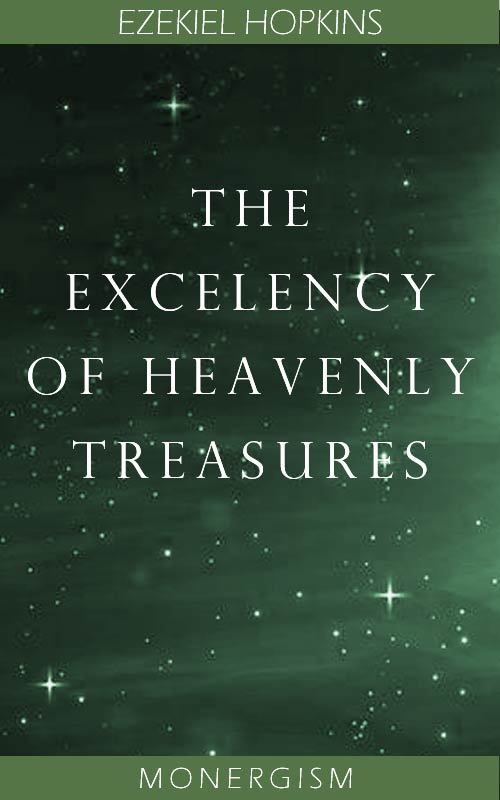 "BUT LAY UP FOR YOURSELVES TREASURES IN HEAVEN, WHERE NEITHER MOTH NOR RUST DOTH CORRUPT, AND WHERE THIEVES DO NOT BREAK THROUGH NOR STEAL: FOR WHERE YOUR TREASURE IS, THERE WILL YOUR HEART BE ALSO." - MATT. 6:20, 21, 22.

THERE is not a soul in the world so destitute and beggarly, but it hath somewhat that it may call, and doth esteem, its Treasure. Not only he, that hath, as the Psalmist speaks, all that his heart can wish, who grasps in possession whatever his covetousness and unbounded desires grasp in imagination; but he also, that possesseth nothing but his own poverty, that hath no abundance but want and misery, such a one whom you would never suspect to be a hoarder, yet hath he that, the hopes and enjoyment of which he counts precious and his soul's treasure.

In dangerous and difficult times, what is the first and chief care of every man, but so to dispose of this his treasure, that, whatever losses he may sustain in other accessary good things, that are but lumber and utensils to the soul, yet his Treasure may be secured both from corruption and violence?

Our Saviour here throws open before our view two Repositories, or Common Treasuries: Vast ones, they are; wherein all the good things, that ever any man in the world enjoyed, are laid up: and they are Earth and Heaven. If you have any treasure, as certainly every one of you has, it must belong to one of these two places: you must deposit it either on earth or in heaven. "Look now," says Christ: "take a view of Earth's Exchequer; and what see you there? There, indeed, is the World's Treasure: all, that many millions of men have been gathering together, and hoarding up for several ages." If you would have an inventory of all this store, St. John hath exactly cast it up, in 1 John 2:16 and it amounts to this sum: All, that is in the world, saith he, is the lust of the flesh, the lust of the eyes, and the pride of life: that is, there are Pleasures, suiting the propension of the flesh: there are Riches, for the greediness of the eye; for, What, saith the Wise Man, is laid up for the owners thereof, save the beholding of them with their eyes? and there are Honour and Dignity; that planetary, airy, good thing, that puffs up; that is the pride of life: and this is the world's all; and that, which many thousands make their treasure. Yea: but, saith Christ, do not you see how rusty and worm-eaten these things are? do you not see what a bustle there is among the men of the world to get them? one pulls and hales them from another, and they are never certain in any man's possession: moth and rust corrupt them, and thieves break through and steal; and, therefore, lay not up your treasure here: there is another treasury for you to store up your good things in, and that is Heaven; a sure and safe place, where no corruption doth infect, nor any violence intrude: therefore, lay up your treasure there: lay up your treasure in heaven.

The Riches of the Heavenly Treasure Opened