Enchiridion: Being a Treatise on Faith, Hope and Love (eBook) 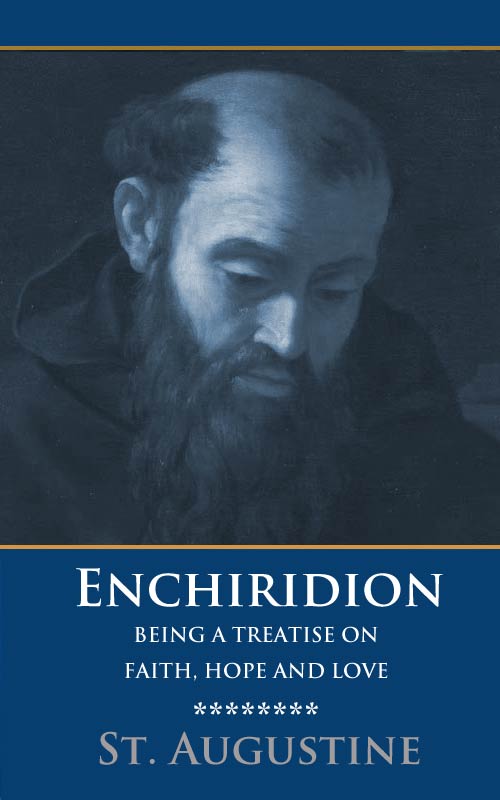 The Enchiridion is a briefer treatise on the grace of God and represents Augustine's fully matured theological perspective -- after the magnificent achievements of the De Trinitate and the greater part of the De civitate Dei, and after the tremendous turmoil of the Pelagian controversy in which the doctrine of grace was the exact epicenter. Sometime in 421, Augustine received a request from one Laurentius, a Christian layman who was the brother of the tribune Dulcitius (for whom Augustine wrote the De octo dulcitii quaestionibus in 423-425). This Laurentius wanted a handbook (enchiridion) that would sum up the essential Christian teaching in the briefest possible form. Augustine dryly comments that the shortest complete summary of the Christian faith is that God is to be served by man in faith, hope, and love. Then, acknowledging that this answer might indeed be _too_ brief, he proceeds to expand it in an essay in which he tries unsuccessfully to subdue his natural digressive manner by imposing on it a patently artificial schematism. Despite its awkward form, however, the Enchiridion is one of the most important of all of Augustine's writings, for it is a conscious effort of the theological magistrate of the Western Church to stand on final ground of testimony to the Christian truth.

For his framework, Augustine chooses the Apostles' Creed and the Lord's Prayer. The treatise begins, naturally enough, with a discussion of God's work in creation. Augustine makes a firm distinction between the comparatively unimportant knowledge of nature and the supremely important acknowledgment of the Creator of nature. But creation lies under the shadow of sin and evil and Augustine reviews his famous (and borrowed!) doctrine of the privative character of evil. From this he digresses into an extended comment on error and lying as special instances of evil. He then returns to the hopeless case of fallen man, to which God's wholly unmerited grace has responded in the incarnation of the Mediator and Redeemer, Jesus Christ. The questions about the appropriation of God's grace lead naturally to a discussion of baptism and justification, and beyond these, to the Holy Spirit and the Church. Augustine then sets forth the benefits of redeeming grace and weighs the balance between faith and good works in the forgiven sinner. But redemption looks forward toward resurrection, and Augustine feels he must devote a good deal of energy and subtle speculation to the questions about the manner and mode of the life everlasting. From this he moves on to the problem of the destiny of the wicked and the mystery of predestination. Nor does he shrink from these grim topics; indeed, he actually _expands_ some of his most rigid ideas of God's ruthless justice toward the damned. Having thus treated the Christian faith and Christian hope, he turns in a too-brief concluding section to the virtue of Christian love as the heart of the Christian life. This, then, is the "handbook" on faith, hope, and love which he hopes Laurence will put to use and not leave as "baggage on his bookshelf."

CHAPTER I THE OCCASION AND PURPOSE OF THIS "MANUAL"

CHAPTER II THE CREED AND THE LORD'S PRAYER AS GUIDES TO THE INTERPRETATION OF THE THEOLOGICAL VIRTUES OF FAITH, HOPE, AND LOVE

CHAPTER III GOD THE CREATOR OF ALL; AND THE GOODNESS OF ALL CREATION

CHAPTER IV THE PROBLEM OF EVIL

CHAPTER V THE KINDS AND DEGREES OF ERROR

CHAPTER VI THE PROBLEM OF LYING

CHAPTER VIII THE PLIGHT OF MAN AFTER THE FALL

CHAPTER XII THE ROLE OF THE HOLY SPIRIT

CHAPTER XVI PROBLEMS ABOUT HEAVENLY AND EARTHLY DIVISIONS OF THE CHURCH

CHAPTER XVII FORGIVENESS OF SINS IN THE CHURCH

CHAPTER XXIII THE REALITY OF THE RESURRECTION

CHAPTER XXV PREDESTINATION AND THE JUSTICE OF GOD

CHAPTER XXVI THE TRIUMPH OF GOD'S SOVEREIGN GOOD WILL

CHAPTER XXVIII THE DESTINY OF MAN

CHAPTER XXXII THE END OF ALL THE LAW

The Value of General Revelation
Herman Bavinck
Sixty-Six Sermons: On Important and Interesting Subjects (eBook)
Thomas Boston
Reading in the Age of Constant Distraction
Curated Resources
Why should we read old theological works?
J V Fesko
The Works of David Clarkson (eBook)
David Clarkson
The Solar System Declares the Glory of God
Jason Lisle
Theology and the Church
W Robert Godfrey
Theology and Everyday Life
Derek Thomas
Clothed in Righteousness
R C Sproul
Why is it important for Christians to affirm “sola Scriptura”?
Stephen J Nichols
Two Jews Talking the Day Before the First Passover
D A Carson
You’re Never “Just” A Church Member
Erik Raymond
God Tells Us How to Know Him
Paul R House
Did the Heretics Outnumber the Orthodox in Early Christianity?
Michael J Kruger
Did Jesus Really Mean That We Should Hate Our Families? (Luke 14)
Thomas R Schreiner
Dear Pastor . . . Your Shepherd Doesn’t Care How Big Your Church Is
Jared Wilson
When I believe the prosperity gospel
T. M. Suffield
Is Religion the Opium of the People, or the Ladder?
John Stonestreet
Why The Church Has Such a Long History of Leading in Education
John Stonestreet
The Sermon on the Mount: How Did Jesus Practice What He Preached?
Nicholas T Batzig
How yesterday's theologians can help you flee today's idolatry
James Eglinton
The Instability of Human Goodness
Thomas Boston
The Word of God and the Sacraments in General
Louis Berkhof
The Clear Explanation of Sound Doctrine Concerning the True Partaking of the Flesh and Blood of Christ in the Holy Supper
John Calvin
Summary of Doctrine concerning the Ministry of the Word and the Sacraments
John Calvin
The Quartersawn Sermon
Jim McCarthy
When We Worship Our Worship
Nicholas T Batzig
Reformed political resistance theology
Gregory Baus
Evangelism in the Age of Social Justice
Thaddeus Williams
The Enneagram: Helpful Personality Tool Or False Theology?
Curated Resources
God's End in Sending Calamities and Afflictions on His People
David Clarkson
Why Is Preaching Important for Healthy Churches?
Steven J Lawson
Three Tests for Diagnosing Idols of the Heart
Matthew Miller
What Is Real Spirituality?
David Strain
The Bad News of Federal Headship
Dale VanDyke
New ICC Report Records a Year of Christian Persecution in China
Curated Resources
Retrieving the “royal metaphor”: reflections on Psalm 93
Scott Swain
Is the World's Hatred a Guarantee That We Are Following Jesus?
Keith Mathison
Psalm 90: A Brief Life, Our Eternal God, and Unending Joy
Ryan Higginbottom
How to Help Others Apply the Bible
Ryan Higginbottom
Adoption helps us understand why Christians should care about sin
Ryan Higginbottom
What is the greatest difference between Reformed theology and non-Reformed theology?
W Robert Godfrey
Not Easily Offended
Nicholas T Batzig
How Studying the Bible Restores the Soul
Paul R House
The Body is More Than a Tool
Carl Trueman
Prayer as Reverent Conversation
Jared Wilson
A Glimpse Into the Infinite Mind Of God
Jason Lisle
Every Father’s Calling: How to Nurture and Admonish
Ben Dunson
Encouragement for Beginners: How to Strengthen a Soul in God
Marshall Segal
Do You Have Job’s Fainting Heart? Should You?
W L Bredenhof