Union with Christ Necessary in Order to Forsake Sin
The New Birth: How the Holy Spirit Brings Life and Enables Faith
7 Reasons God's Sovereignty Gives those in Christ Contentment in the Face of Adversity
Yielding to God's Providence
Ignorance, Unteachableness, Obstinacy and Carelessness Cannot be Conquered any Otherwise than by the Spirit of God
Does Effectual Grace Make Us Automatons?
Human Reason, Logic & Scientism
Monergism eBooks on Amazon in Kindle Format
Do Not Despise the Day of Small Beginnings
14 Ways that God is Far More Excellent than Men

Doctrines of Grace in the Gospel of John (eBook) 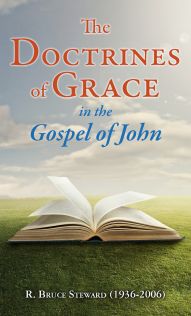 Study the Gospel of John with this excellent resource. R. Bruce Steward examines the biblical teaching of total depravity, election, the atonement, God’s saving grace, and the perseverance of the saints from the fourth Gospel.  This is an excellent tool for individual Bible study or group learning.

In every generation the Christian in the pulpit and in the pew has had need of a clear view of the Gospel, which is “the power of God unto salvation to every one that believeth” (Romans 1:16). It is of utmost importance that the Gospel proclaimed and believed be the “good news” from God, underpinned by His authority, and therefore based on His Word. For this reason I have prepared this brief study.

I have chosen the Gospel of John because it was expressly written by the “beloved” disciple of Jesus Christ to bring men to faith in Jesus Christ (20:30-31). Throughout this Gospel our attention is constantly focused on Jesus Christ. We read of His signs and His solemn words to men. The Gospel contains an authentic account of an eyewitness who records what he saw and heard, and who, as an Apostle, wrote an authoritative interpretation of the works and words of Jesus Christ under the guidance of the Holy Spirit (14:25, 26; 15:26, 27; 16:13-15; 20:30, 31; 21:24).

Another reason for choosing this Gospel is that I have suggested to spiritually concerned men, women, boys and girls that they begin their study of the Bible here. The churches that I pastored for over twenty-one years gave out Gospels of John as means of literature evangelism. I have also observed that this has been the practice of many evangelical pastors and churches.

As an evangelical Christian, one who believes and proclaims the Gospel of Jesus Christ, I am concerned that what I believe and preach be the same “good news” that Jesus preached, and that He commissioned His Apostles and the church through all time to preach (see Matthew 28:18-20; Luke 24:44-49; the Book of Acts). Those who are evangelical Christians are divided today concerning certain features of the Gospel. Whether they will admit it or not, they are either Calvinists or Arminians.

Two basic issues are at stake in the viewpoint one takes.

1). The first has to do with man: Since the fall of man, what can man do toward his own salvation? It is not a question of man’s responsibility, for both Calvinists and Arminians hold all fallen men accountable to God, and both call on all men “to repent and believe the Gospel” (Mark 1:15, Acts 17:31; 20:21).

2). The second issue has to do with God and what kind of salvation He sets before men: Is what God offers an actual salvation or a possible salvation?

These are issues which have been raised in the church repeatedly. They were first brought to a head in the controversy between Augustine and Pelagius in the late fourth and early fifth centuries. Through the Middle Ages they were discussed and argued by medieval theologians. In the sixteenth century Luther defended the Augustinian position against Erasmus. John Calvin entered the controversy in opposition to the church of Rome and the semi-Pelagians of his day. Again, in the seventeenth century these questions were debated at the Synod of Dort (AD 1618-19). At this Synod, a group of men who were followers of Jacobus Arminius (died 1609) presented a “remonstrance,” or protest, against the Augustinian-Calvinistic understanding of the Gospel. The response of the Synod in regard to these two issues was to uphold as biblical truth the teachings of Augustine and Calvin, and to reject that of Arminius. The Synod’s response may be briefly summarized by the word “TULIP.”