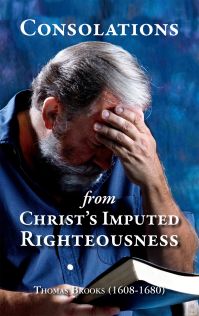 Consolations from Christ’s Imputed Righteousness wonderfully combines devotional encouragement and doctrinal truth. It faithfully declares the heart of the Gospel for both Christians and non-Christians alike.

Thomas Brooks (1608-1680) was born into a Puritan family and became a Nonconformist preacher. He studied at Cambridge, became an advocate of the Congregational way, and served as a chaplain in the English Civil War. In 1648 he accepted the rectory of St. Margaret’s in London and on several occasions preached before Parliament. Like many others, Brooks was ejected by the Act of Uniformity in 1662, and remained in London as a Nonconformist preacher. He labored in comfort and relief during the Great Plague and Great Fire, and in 1672 was granted a license to preach in Lime Street. Brooks wrote over a dozen books, which include Precious Remedies against Satan’s Devices and The Mute Christian under the Smarting Rod. His writings are always Christ-centered, filled with Scripture, and usually devotional in character. Charles Spurgeon once told his students, “His style is clear and full; he never so exceeds in illustration as to lose sight of his doctrine. His floods of metaphor never drown his meaning, but float it upon their surface. If you have never read his works I almost envy you the joy of entering for the first time.”

I.  Justification through Imputed Righteousness

A. The grace of justification: forgiveness and acceptation

C. The righteousness of Christ

G. Christ’s righteousness must become ours

H. Christ’s righteousness is imputed to us

A. Satisfies the justice of God

B. Takes away all unrighteousness

D. Will answer to all your fears

E. Is the best title that you have for the kingdom

F. Is the only true basis for a believer to build upon

G. You have the highest reason to rejoice

H. May serve to comfort from fainting

I. Will give the greatest boldness at the judgment

How Should We Respond to the Book of Revelation?
Dennis E Johnson
Bring Back Foxe’s
Darryl Dash
Fighting Human Trafficking in Your City
Curated Resources
Creeds and Confessions: What’s the Difference?
Curated Resources
Who Will ‘Stand in the Gap’?
D A Carson
Ten Words That Changed Everything About My Suffering
Joni Eareckson Tada
Gnosticism and Naturalism: Why We Must Reject Both!
Craig Carter
How do I read the Old Testament historical books devotionally?
Samuel Lee
The Family Expositor - Romans (docx)
Philip Doddridge
An Election of Particular Persons
Benjamin Keach
How Sins are Removed in Justification
Samuel Rutherford
Of the Conditionality of the New Covenant.
John Flavel
How Christians answer to the call of Christ, and so come to have Fellowship with him
John Ball
How Christ Doth Bring His People into Covenant with Himself
John Ball
A Treatise of the Covenant of Grace
John Ball
One Overlooked Danger in Christian Parenting
Trevin Wax
Christian Identity according to the Apostle Paul
Matthew Adams
The Effectual Truth of Identity Politics
Curated Resources
Concerning the One True God’ & ‘Of God the Father
Zacharias Ursinus
Propositions and Principles of Divinity
Curated Resources
The True God Opposed, Exclusively, To All the God's of the Heathen
John Calvin
Christian Liberty
Fred A Malone
What is Christian Liberty?
George Gillespie
Of Christian Liberty and Liberty of Conscience
Pastor Bob Burridge
Christian Liberty and Liberty of Conscience
Brian Schwertley
Christian Liberty and Liberty of Conscience
John Battle
Christian Liberty and Liberty of Conscience
Tom Nettles
Pastor, Defend Christian Liberty
Caleb Greggsen
What is Christian Liberty?
Mike Ratliff
Liberty vs. Law?
Burk Parsons
Who Should Come to the Lord’s Table?
W Robert Godfrey
The Snare of Subtweeting
Nicholas T Batzig
Does Reformed theology continue to reform?
Joel E Kim M.Div
Self or Christ; Which Is It?
Horatius Bonar
Faith in an Unseen Christ
Horatius Bonar
Creation in Six Days
Louis Berkhof
The Cost of Digital Addictions?
John Stonestreet
How Sanctification Differs from Justification
John Brown of Haddington
The Sinfulness of Works after Regeneration
William Cunningham
Authentic Ministry: Servanthood, Tears, and Temptations
Joel R Beeke
Warnings for Counselors from the Book of Job
Curated Resources
Our Suffering Profits Us and Benefits Others
Paul Tautges
You Need Christ to Put Your Sin to Death
Dane C Ortlund
Signaling Our Consumption
Curated Resources
God is in the Details (YouTube)
Curated Resources
On Faith in God (eBook)
Herman Witsius
Pride Vitiates Religious Knowledge
W. G. T. Shedd
Sin in the Heart the Source of Error in the Head
W. G. T. Shedd
Psalms: Their History, Teachings, and Use
William Binnie
The Nature of Vital Piety
Archibald Alexander