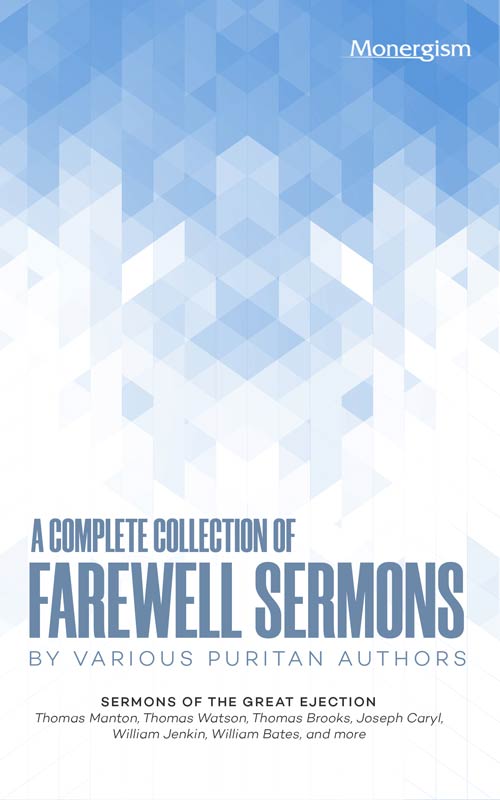 Sermons of the Great Ejection

Most of the sermons contained in this collection were delivered on the twenty-fourth of August, in the year 1662. On that day the act requiring a perfect conformity to the book of Common Prayer, and to the rites and ceremonies of the church took place: the effect of which enactment was the silencing of nearly two thousand five hundred ministers, the death of three thousand nonconformists, and the ruin of sixty thousand families. Such was the result of the restoration of Charles the Second of infamous memory. To ascertain the spirit which actuated the ejected ministers, it is sufficient to refer to the following selection of their farewell sermons, which were delivered at the very moment they were agonizing under the fangs of persecution, but which discover nothing but a combination of Christian graces. Bishop Burnet admits that 'many of them were distinguished by their abilities and their zeal '; and the celebrated Locke has remarked, 'Bartholomew-day was fatal to our church and religion, by throwing out a very great number of worthy, learned, pious and orthodox divines.'"

"Those great preachers whose names we remember, were men who counted nothing their own: they were driven out from their benefices, because they could not conform to the Established Church, and they gave up all they had willingly to the Lord. They were hunted from place to place, they wandered here and there to preach the gospel to a few. Those were foul times; but they promised they would walk the road fair or foul, and they did walk it knee-deep in mud; and they would have walked it if it had been kinee-deep in blood too. But now we are all little men, there is scarce a man alive now upon this earth." - C.H. Spurgeon

"John Stoughton has described the Sunday upon which most of the Farewell Sermons were preached: 'No Sunday in England ever resembled exactly that which fell on the 17th of August, 1662, one week before the feast of St Bartholomew. There have been "mourning, lamentation, and woe," in particular parish churches when death, persecution, or some other cause has broken pastoral ties, and severed from loving congregations their spiritual guides; but for many hundreds of ministers on the same day to be uttering farewells is an unparalleled circumstance. In after years, Puritan fathers and mothers related to their children the story of assembled crowds, of aisles, standing-places and stairs, filled to suffocation, of people clinging to open windows like swarms of bees, of overflowing throngs in churchyards and streets, of deep silence or stifled sobs, as the flock gazed on the shepherd - "sorrowing most of all that they should see his face no more." ' It is well for us to bear such a background in mind as we read the following pages. The atmosphere of that day was electric and charged with emotion; the popular discontent was great and strong guards stood ready in London, but these sermons seem far removed from all that. There is a calmness, and unction and a lack of invective. Great though their sorrow was for their flocks and for their nation, they had a message to preach which was more than equal to the strain of the crisis. An eternal God, an Ever-Living Saviour and a glorious hope of heaven, carried them through this heaviest trial." - Iain Murray

45. Dr. Bates his Prayer at Dunstans in the West