Christ and the Inheritance of the Saints (eBook) 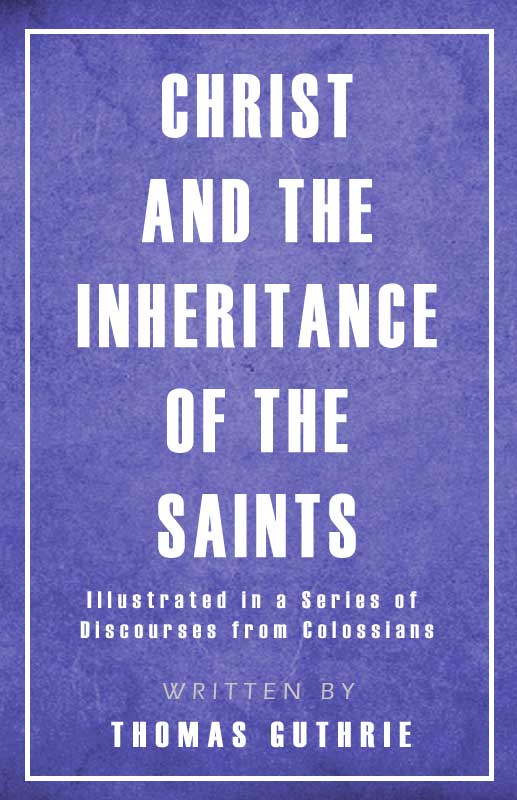 Illustrated in a Series of Discourses from Colossians

CH Spurgeon used the word "brilliant" to descibe his exposition on Colossians but he wasn't just a preacher!

Very Rev Thomas Guthrie FRSE DD (12 July 1803 – 24 February 1873) was a Scottish divine and philanthropist, born at Brechin in Angus (at that time also called Forfarshire). He was one of the most popular preachers of his day in Scotland, and was associated with many forms of philanthropy—especially temperance and Ragged Schools, of which he was a founder.

One thing is often set against another in the experience of the Christian; and also in the every-day procedure of the providence of God. So fared it with Jacob that night when he slept in Bethel. A stone was his pillow, and the cold hard ground was his bed; yet, while sleep sealed his eyelids, he had God himself to guard his low-laid head, and dreams such as seldom bless a couch of down.

A ladder rose before him in the vision of the night. It rested on earth—and reached to the stars. And forming a highway for a multitude of angels, who ascended and descended in two dazzling streams of light—it stood there as the bright sign of a redemption which has restored the fellowship between earth and Heaven, and opened a path for our return to God.

Now, the scheme of salvation, of which that ladder was a glorious emblem, may be traversed in either of these two ways. In studying it, we may descend by the steps that lead from the cause to the consummation—or, taking the opposite course, we may rise from the consummation to the cause. So, as a matter sometimes of taste, sometimes of judgment—men do in other departments of study.

The geographer, for example, may follow a river, from the lone mountain-tops where its waters spring, down into the glen, into which, eager to leave sterility behind, it leaps with a joyous bound; and from thence, after resting a while in black, deep, swirling pool, resumes its way, here spreading itself out in a glassy lake, or there winding like a silver serpent through flowery meadows; until, forcing a passage through some rocky gorge, it sweeps out into the plain to pursue, amid shady woods and by lordly tower, through cornfields, by smiling villages and busy towns, a course that, like the life of man, grows calmer as it nears its end.

Or, starting from the sea-beach, he may trace the river upwards; until, passing town and church, tower and mill, scattered hamlet and solitary shepherd's cottages—in some mossy well, where the wild deer drink, or mountain rock beneath the eagle's nest, he finds the place of its birth.

The botanist, too, who describes a tree, may begin with its fruit; and from this, whether husky shell, or rugged cone, or clustering berry, he may pass to the flower; from that to the buds; from those to the branches; from the branches to the stem; and from the stem into the ground, where he lays bare the wide-spread roots, on which—as states depend upon the humbler classes for power, wealth, and worth—the tree depends both for nourishment and support.

Chapter 2. The Dominion of Darkness

Chapter 3. The Kingdom of Christ

Chapter 7. Christ, the Image of God

Chapter 10. Christ, the End of Creation

Chapter 14. Christ, the Firstborn From the Dead

Chapter 15. The Fullness of Christ