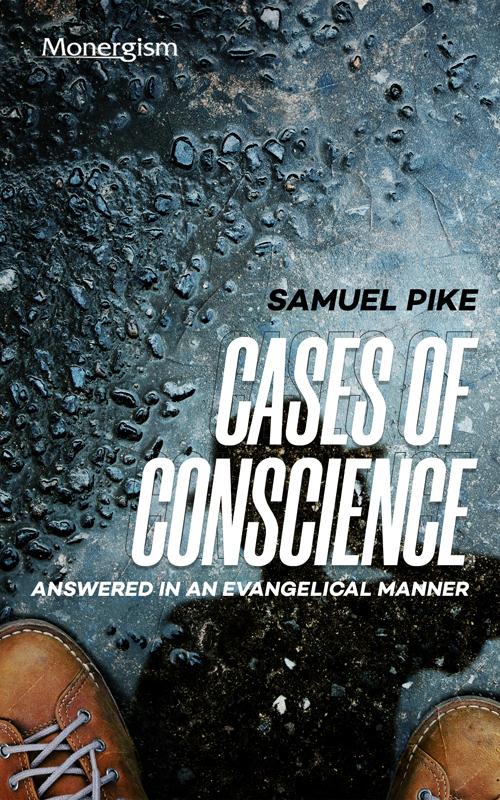 by Samuel Pike and the Rev. S. Hayward

CASES OF CONSCIENCE: ANSWERED IN AN EVANGELICAL MANNER TO WHICH IS ADDED "THE SPIRITUAL COMPANION" OR THE PROFESSING CHRISTIAN TRIED AT THE BAR OF GOD’S WORD

If there’s a theme to the series of questions and answers in this text, any number of topics might fit the bill — from assurance, to experimental religion,1 to godly living. But perhaps “evangelical obedience” is best. The Puritans called it inherent righteousness (personal holiness), as distinct from the righteousness that’s imputed to us from Christ. We are justified (declared righteous) by God’s grace, because of Christ’s righteousness alone. It’s inherent in Him, and imputed to us by faith. God doesn’t consider our righteousness at all, because it’s tainted by our sinful nature.

That begs the question, if Christ’s obedience is what justifies us, then what is the purpose of our obedience? Well, it’s evidence of our submission to God. It’s a testimony to the grace and goodness of God. It fulfills the moral law to love God and love our neighbor wholeheartedly. It’s part of the sanctifyingv process that conforms us more and more to the image of Christ. It’s pleasing to God, and honoring to Christ. It’s part of communing with God. And it serves to prove that our faith is not dead (Jas 2.17).

But if we emphasize personal obedience too much, we’re called legalists. And if we emphasize grace too much, we’re called libertines (antinomians). Even in the first century, some claimed that Paul’s emphasis on grace undermined the law of God, and encouraged rampant sin. Paul replied “What then? Shall we sin because we are not under law but under grace? Certainly not!” (Rom 6:15) On the other hand, “I do not set aside the grace of God; for if righteousness comes through the law, then Christ died in vain.” (Gal 2:21)

The authors of this book understood the need to live out our faith in Christ, in a God-honoring way. Godly Christians in every generation may identify with the cases presented here, perhaps asking themselves some of the same questions. This book was written to them, so that they may follow Christ faithfully and confidently, quenching all those fiery darts of Satan. As William Gurnall wrote,

“You march in the midst of gallant spirits, your fellow soldiers, every one the son of a Prince. Behold, some, enduring with you here below a great flight of afflictions and temptation, take heaven by storm and force. Others you may see after many assaults, repulses, and rallyings of their faith and patience, have gotten upon the walls of heaven, conquerors. From there they look down... and call you, their fellow brethren on earth, to march up the hill after them, crying aloud: ‘Press on, and the city is your own, as it is now ours, who for a few days’ conflict are now crowned with heaven’s glory, one moment’s enjoyment of which has dried up all our tears, healed all our wounds, and made us forget the sharpness of the fight, with the joy of our present victory.’”

THE CHARACTER AND HAPPINESS OF THE HAPPY MAN.

THE CHARACTER OF AN HONEST MAN.

THE CHARACTER OF THE FAITHFUL MAN.