Calvinism: Mixed and Pure: A Defence of the Westminster Standards 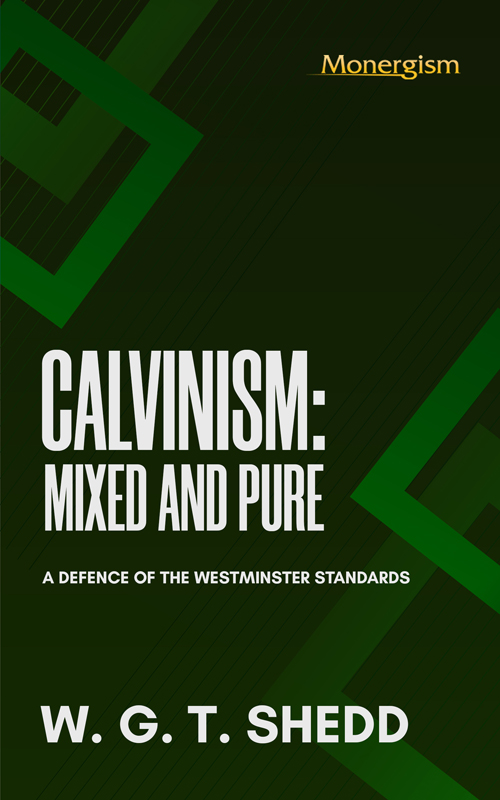 THE object of this work is to define and defend the tenets of Calvinism in their original purity and self-consistence, as distinguished from proposed modifications of them for the purpose of an alleged improvement. It has grown out of the proposal introduced into the Northern Presbyterian Church, to revise the Westminster Standards. It contains the substance of a pamphlet which the author published in opposition to this proposal when it was first made, together with discussions of several important subjects that have subsequently come up for examination during the controversy in the Church. Of these, preterition, common and special grace, original sin, infant salvation, the "larger hope," and the inerrancy of Scripture, are the most prominent. The controversy has disclosed the fact, that some Presbyterians deny that God may justly pass by any of mankind in the bestowment of saving grace; and assert that common grace may become saving grace by the sinner's co-operation, that original sin is not deserving of eternal death and therefore that infants are not liable to it, that the Westminster Standards teach that all the heathen are lost, and that the autographs of the inspired writers contained more or less of error. The writer endeavors to show that the first opinion is fatal to the doctrine of Divine sovereignty in election; that the second is Arminian synergism, not Calvinistic monergism; that the third destroys the doctrine of infant salvation, by making it only a quasi-salvation and a matter of obligation on the part of God; and that the fourth and fifth are misstatements of the contents of the Confession.

The aim of the author is twofold: first, to explain some of the more difficult points in Calvinism, and thereby promote the reaffirmation of the Westminster Standards pure and simple, precisely as they were adopted by both schools in the reunion of 1870, instead of the revision of them as now proposed, which had it been urged at that time would have been fatal to the cause of reunion; and secondly, to justify and defend before the human understanding, that intellectual and powerful system of theology which had its origin in the Biblical studies and personal experience of the two most comprehensive and scientific theologians of Christendom, Aurelius Augustine and John Calvin.

INEXPEDIENCY OF THE REVISION OF THE WESTMINSTER CONFESSION

OBJECTIONS TO THE REVISION OF THE WESTMINSTER CONFESSION

ARE THERE DOCTRINAL ERRORS IN THE WESTMINSTER CONFESSION?

THE WESTMINSTER STANDARDS AND THE UNIVERSAL OFFER OF MERCY

THE MEANING AND VALUE OF THE DOCTRINE OF DECREES

PRETERITION NECESSARY TO THE SOVEREIGNTY OF GOD IN ELECTION

PRETERITION AND THE LOPSIDED VIEW OF THE DIVINE DECREE

THE DOUBLE PREDESTINATION TO HOLINESS AND SIN

THE WESTMINSTER STANDARDS AND THE "LARGER HOPE"

THE WESTMINSTER AFFIRMATION OF THE ORIGINAL INERRANCY OF THE SCRIPTURES

CALVINISM AND THE BIBLE

Five Lessons Learned from Practicing Church Discipline
Tom Hicks
Simply Divine: Worshiping a God Who Lacks Nothing
Michael Reeves
Relentlessly Call Abortion What It Really Is
Jon Bloom
Social Justice (Series)
Dr. John MacArthur
Calvin's Four Rules of Prayer
Hal Wynn
Let God Speak: Hermeneutics
James White
Expressive Individualism is a Bust
Thaddeus Williams
Thy word is a lamp unto my feet, and a light unto my path
Thomas Manton
The Lord’s Prayer Teaches Us How to Pray Every Other Prayer
Kevin DeYoung
Sincere and Pure Devotion to Christ
Denny Burk
Glorifying God Includes Enjoying His Good Gifts
Stephen Kneale
Wisdom From Above: The Hope of Wisdom, Pt. 2 - Proverbs 2:1-22
Jeff Durbin
Wisdom From Above: The Hope of Wisdom - Proverbs 2:1-22
Jeff Durbin
Wisdom From Above: Wisdom's Last Laugh - Proverbs 1:20-33
Jeff Durbin
The Impossibility & Futility of Knowledge Apart From God - Proverbs 1:7
Jeff Durbin
Is God's Word only found in the Bible?
Nick Potts
The Foolish Virgins Only Desired to Look Like Wise Virgins
Ben Stahl
The Pitfalls and Possibilities of Being “Political”
Kevin DeYoung
7 Reasons Why the Gospel of John is So Special
Michael J Kruger
What We Miss When We Skip the Book of Ezra
Ryan Higginbottom
Why Romans Is the Greatest Letter Ever Written
Andrew Naselli
What the Early Church Can Teach Us about Living in This Strange New World
Carl Trueman
Why ‘Cool Church’ is no longer working with Millennials and Gen Z
Curated Resources
Judas’ Betrayal and the Providence of God
Josh Buice
The Treachery of Judas Iscariot and the Sovereignty of God over Sin
Sam Storms
Why Did Jesus Choose Judas?
John Piper
The Sovereignty of God and Christian Ministry
Richard Phillips
God’s Sovereignty in Salvation II
Michael J Kruger
God’s Sovereignty in Salvation I
Michael J Kruger
How Can a Good God Allow Evil?
Richard Belcher
Judas, Jesus and the Sovereignty of God - Part 2
Jeff Durbin
Judas, Jesus, and God's Sovereignty - Part 1
Jeff Durbin
Can You Be a Pharisee and Not Know It?
Keith Mathison
Transubstantiation: What Catholicism Teaches About the Supper
Reid Karr
Making Use of the Visible Signs: The Importance of the Sacraments in the Christian Life
Benjamin Glaser
Where Mercy and Justice Meet
Dave Harvey
Citizens and Exiles: Christians, the Church, and Culture
Scott Aniol
The Marxist Eschatology of Critical Race Theory
Darrell B. Harrison
What does it look like to make a disciple?
Steven J Lawson
How should a church engage in discipleship?
Voddie Baucham
Can you describe the Sovereignty of God? (YouTube)
James White
Kingdom Race Theology: Is This God’s Plan or Something Else?
Virgil Walker
Letters to the Seven Churches: To the Church in Ephesus (Revelation 2:1-7)
Kim Riddlebarger
Romans 8: Mortifying Sin
Stephen Unthank
Romans 8: Christ is Our Life
Stephen Unthank
Don’t Sacrifice Your Children
Paul Liberati
How Ordinary Worship Is both Reverent and Relevant
Curated Resources
Samuel Miller on the “Sanctified Judgment” of the Enlarged, Elevated, and Strengthened Mind: Piety, Learning, and the Right Kind of Bias
Paul Kjoss Helseth
5 New Stats You Should Know About Teens and Social Media
Chris Martin
Truths We Must Defend: Lessons from China
Luke Wesley