The Book of Revelation - A Study (eBook) 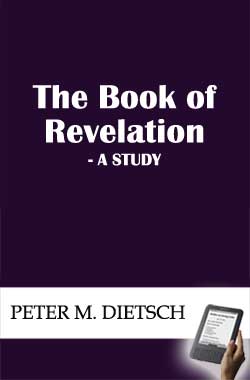 For many, the most difficult book of the Bible to understand is the final book of the New Testament, the book of Revelation. Written by the Apostle John as a record of a series of visions given to Him by Jesus Christ, this apocalyptic work confounds and scares many Christians. They have heard no end to fanciful interpretations, been given complicated charts, forced to watch cheesy movies about the ‘rapture,’ and warned about the ‘impending tribulation’ which Christians may or may not endure and which will last for three and a half or seven years, depending on who you talk to.

In Understanding Dispensationalists, Poythress examines and critiques these two elements of dispensationalism (a strong division between Israel and the Church and a faulty view of ‘literal interpretation’ means). Then he goes on to explain the contrast of covenant theology (how the Bible teaches a continuity between Israel and the Church and how the Scriptures are rightly interpreted using a grammatical-historical approach). Again, to better understand dispensationalism, I commend Poythress’ book.

New Book: “The Book of Revelation – A Study”

But the main reason that I bring up the confusion about the Book of Revelation and the error of dispensationalism is because I have had a couple conversations recently about these things. In these conversations, I’ve received questions about Reformed (or covenant) theology, eschatology (the study of the last days), and the book of Revelation. I’ve previously written about how according to the Bible, we have been living in the end times for about two thousand years, since the first coming of Christ. And, I’ve had many conversations over the years like the ones I’ve recently had.

The first chapter of this new e-book that I’ve put together is an examination of the various methods by which Revelation has been interpreted, provides an outline and overview of the book, and establishes particular hermeneutical (or interpretive) principles. The subsequent chapters provide a chapter-by-chapter study of the book of Revelation, interspersed with some excurses on topics such as how to interpret the millennium and the time designations found in Revelation.

While many find the book of Revelation confusing and scary, William Hendriksen begins his commentary describing it as “serenely simple, yet beautiful in its very simplicity.” My hope and prayer is that this new e-book will help to bring clarity such that more Christians will come to embrace the simplistic beauty of the book of Revelation.

The Lord be with you!
- Pastor Peter M. Dietsch