Bondage of the Will (eBook) 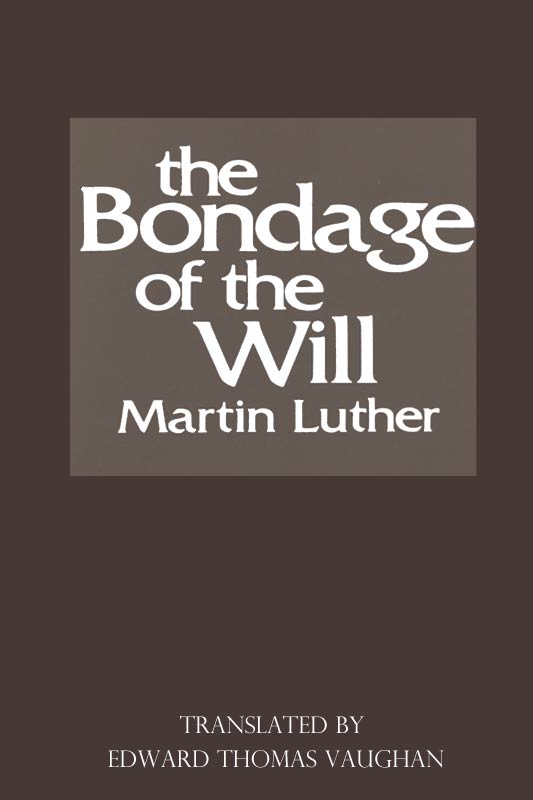 There are many translations and editions of Luther's Bondage of the Will. They vary widely in the partitioning and sectioning of the text, making it difficult to compare them. This edition has five parts, with numerous sections in each part. Luther's wording was direct and forceful, even though peppered with dangling phrases. He wrote as he might speak, with lots of dashes and parentheticals. Vaughan's early 19th c. English rendering of the Latin was faithful to that style, but it was a bit cumbersome for a modern audience. Wordiness, unreferenced pronouns, implied words, archaic punctuation, broken and run-on sentences, awkward syntax, etc., have been "corrected" and largely simplified. Personal pronouns remain (e.g., "her", "she") as applied to things like reason. Original page numbers are retained intra-text, and are used for cross-references in the notes. Page-breaks were adjusted for easier reading.

Rev. Vaughan, both translator and editor, was not unbiased in his assessment of Luther's book. He brings a staunchly Calvinistic viewpoint to his notes. That has value in itself. He was from Cambridge, thus avoiding the Oxford Movement of his day, with its Romanizing influence. Unfortunately, we're left with a pedantic and condescending tone, so characteristic of Cambridge. Vaughan celebrates Luther's exceptional gifting by God, to fight the good fight, to uphold God's grace and the authority of Scripture, and to do it against all comers, at any cost. His biographical sketch of Luther is wonderfully pithy, informative, and inspiring.

But you may feel, understandably, that Vaughan's notes are unwelcome rather than helpful. Because of the length of some of them (even his footnotes had footnotes!) many were converted to endnotes (with Roman numerals), to avoid distracting the reader from Luther's text. These are marked [long note] beside the page number. Even so, his expertise in the subtleties of Latin is informative. Language and grammar were at the heart of many of Luther's responses to Erasmus, who was arguably one of the finest linguists of his day. Luther wrote,

"Your grammar-masters, and boys in the streets, know this: that by verbs of the imperative mood nothing else is expressed but what ought to be done. What is done, or may be done, must be declared by indicative verbs. (p. 165)

Some of Vaughan's notes constitute a critique of Luther's work, as well as an explanation of it. I think he is overly critical of Luther at times, slipping into commentary as he pursues doctrinal exactness and clarity. For Calvinists, such notes identify where relevant points of Lutheran doctrine may differ from Calvinist, as well as later reformed doctrine. Vaughan observes that Luther did not yet fully comprehend the "God-manifestation" in Christ. But to be fair, Luther was blazing a trail for others to follow, not paving it for them.

I hope you find this edition of Luther's classic both edifying and satisfying, and a worthwhile addition to the others currently available.

P.S. I would gladly have included Erasmus' Diatribe, if an uncopyrighted English translation were currently available online. Curiously, I could not find one