“We must learn to avoid the contemporary plague of preaching the benefits of the gospel without proclaiming Christ himself as the benefactor of the gospel. We do not offer people abstract blessings (peace, forgiveness, new life) as commodities. Rather we preach and offer Christ as crucified and risen, in whom these blessings become ours and not otherwise. We preach the person in the work, never the work and its blessings apart from the Savior himself.” - Sinclair Ferguson, Some Pastors and Teachers, 709.

“They are the happiest Christians, who have the lowest thoughts of themselves, and in whose eyes Jesus is most glorious and precious.” —John Newton

This week we have 3 free eBooks and some other links below... 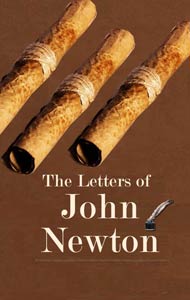 The Letters of John Newton (eBook)

Over 150 letters. John Newton converted slave-trader, preacher, and hymn-writer, was one of the most colourful figures in the Evangelical Awakening of the eighteenth century. 'Once an infidel and libertine, a servant of slaves in Africa,' he wrote for this epitaph, 'by rich mercy of Jesus Christ, preserved, restored, pardoned, and appointed to preach the faith he had long laboured to destroy.' It was through his prolific correspondence that Newton fulfilled his distinctive word as 'the letter-writer parexcellence of the Evangelical Revival'. His grasp of Scripture and deep personal experience of the 'amazing grace' of God, his many friends (among them, Whitefield, Cowper and Wilberforce), his manifold trials, his country pastorate, his strong, clear, idiomatic style- all these factors combined to prepare the author of 'How sweet the Name of Jesus sounds', for the exercise of his special gift. These letters, selected by his biographer, Josiah Bull, bear the practical imprint of all of Newton's writings; they cover a wide variety of subjects and aim 'to conform the believer to Christ'. Among them are several that were not previously published in earlier collections of his correspondence. Of particular value and interest are the biographical sketches and historical notes supplied by the editor.

"Newton's ... letters, in which he dealt with a wide variety of pastoral issues, are pure gold. Newton was able to take the great theological doctrines of the faith and apply them to the needs of friends, parishioners, even strangers who wrote for advice. In his letters he is often blunt, yet always tender. He is remarkably humble and open about his own flaws, but never in a cloying or self-absorbed manner. He is therefore able to point others to the grace of Christ on which he himself clearly depends.Reading one of Newton’s letters is like taking a hike along some path between high walls of rock or foliage that suddenly affords breathtaking views. In the midst of addressing some commonplace condition, usually with realistic detail, Newton will suddenly, almost as an aside, toss in several lines that blaze with glory.Newton’s letters have influenced both my pastoral work and my preaching. Newton did not simply call people to holy living, but he also did close analysis of their motives and showed them the specific reasons they were failing to obey God. Decades of constantly reading and re-reading the letters have taught me how to do better analysis of underlying motives, so that when the high doctrines of grace are preached and applied, they do not merely press on the will but change the heart." - Dr. Timothy Keller

“Ex-slave-trader John Newton was the friendliest, wisest, humblest and least pushy of all the eighteenth-century evangelical leaders, and was perhaps the greatest pastoral letter-writer of all time.” - J. I. Packer

"These letters are, according to the various circumstances of his correspondents — designed to guide and direct, to comfort, or, if need be, with all tenderness to reprove, while they often become the ardent effusions of Christian love towards those who formed the inner circle of his friends. They are full of wisdom and piety, rich in kindly feeling, written in easy flowing language, with many happy turns of expression, and often made striking by their simple yet ingenious illustrations." - Josiah Bull

Messiah: Fifty Expository Discourses on the Oratorio of Handel (eBook)
by John Newton

It is my desire and aim to know nothing among you but this, to preach nothing to you but what is immediately connected with the doctrine of Jesus Christ and him crucified, including what the Scripture teaches us concerning the causes and the effects of his obedience unto death, even the death of the Cross. But I have often wished, for the satisfaction of my stated hearers, to be able to adopt some plan which might lead me in a regular succession of subjects, to exhibit the principal outlines of the Saviour’s character and mediation so as to form if not a picture, at least a slight sketch of those features of his glory and of his grace, which endear him to the hearts of his people, and to comprise, according to the little measure of my light and experience, a summary or system of evangelical divinity. Such a plan has lately occurred to me, and in an unexpected manner. Conversation in almost every company for two or three weeks past, has much turned upon what is called the Commemoration of Handel, and the grand musical performances at the Abbey on that occasion, and particularly the Messiah. I can easily conceive that when the Messiah was performed with such unusual advantages, if any person present of a sound spiritual judgement, could have hoped that the greatest part or a very considerable part of the performers and audience were capable of entering into the spirit of the subject, he might enjoy one of the highest and noblest gratifications this life is capable of. But they who love the Redeemer and to join in his praise, if they did not find it convenient, or think it expedient to hear the Messiah at Westminster, may comfort themselves that in a little time they shall be still more abundantly gratified. Ere long death shall rend the veil, which hides eternal things from our view and introduce them to that unceasing song and universal chorus, which are even now performing before the throne of God. In the meantime I have thought, that true Christians may without the assistance of vocal or instrumental music, find a higher joy in a humble contemplate [contemplation] of the words of the Messiah than they can derive from the utmost efforts of musical genius. This therefore is the plan I spoke of. I mean to lead your meditations to the language of the Messiah, to consider in their order, if the Lord is pleased to afford life, ability and opportunity, the several sublime and interesting passages of Scripture which are the basis of that admired composition. If the Lord the Spirit is pleased to smile upon the attempt, pleasure and profit will go hand in hand.

Studies in Perfectionism
by B. B. Warfield

This one thousand page work was taken from the original ten volume series of Warfield works first published by Oxford University Press which has been popular for years as a corpus of his writings. Volume 1 covers German rationalists but this study’s foci is in volume 2 with such men and movements as Asa Mahan, Charles Grandison Finney, Hannah Whitehall Smith, the Oberlin teaching, the Higher Life teaching, the Fellowship movement, Keswick, and the Victorious Life movement, mostly as they appear in English-speaking countries.

Perfectionism is a phenomenon which, if dealing exclusively in the Christian context, has appeared in Catholic, Arminian/Weslyan, Quaker and Quietists circles. It has been most prominently displayed in the Keswick and Victorious Life movement. The predominate theme of Warfield is that sin is under-evaluated and under-appreciated by these perfectionists, and that sin consists of any failure to conform to the law of God. In Warfield’s view, the perfectionists discussed have a theoretical rather than actual perfectionism. Salient arguments and a great deal of vital history make this a most useful book.

“Perfectionism was first given standing in the Protestant churches through the teaching of John Wesley, although he himself never claimed perfection.” Warfield’s initial concern, however, is with the Oberlin College situation and the two men, Asa Mahan and Charles G. Finney, and the development of what is called “Oberlin Theology.” His evalution?—”The cold, Pelagian system of the new divinity has been attached to the engine of fanaticism.” This “New Divinity” emphasis on the ability of man stood in direct opposition to the teachings of Jonathan Edwards which had predominated prior to this time. In its earliest days the Weslyan perfectionistic view took hold at Oberlin. A second stage of the Christian life was called by the different names of “entire sanctification,” “holiness,” Christian perfection,” and sometimes “the baptism of the Holy Ghost.”

Finney’s theological perspective was largely shaped by the Congregationalist N. W. Taylor. A distinctive aspect of this perfectionism is that “what is taught is a perfection that consists in complete righteousness, but in a righteousness which is adjusted to fluctuating ability.”4 A person is not responsible for righteousness beyond what he knows that perfection to be.

Continue to read the this review by Jim Ellif

What is a Christian? - List of aggregated links @Monergism

Are You A Christian? (MP3) by Voddie Baucham

A New Creature by Thomas Watson

My friend Greg Taylor, who is a member of Trinity Church in Portland, OR where Dr. Art Azurdia preaches, created this chart from a sermon where Azurdia makes a contrast between a moral person and a holy person. 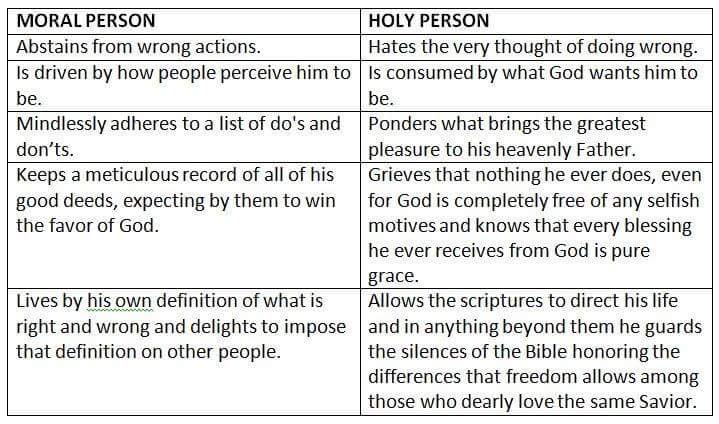 The sun will burn your eyes out from a distance of 92 million miles and do you expect to casually stroll into the presence of its Maker? - Luke Walker

“The greatest work God ever performs was not the creation of the universe out of nothing, but it is the new creation of saints out of sinners.” - Steven Lawson