The Responsibility of the Church in the New Age 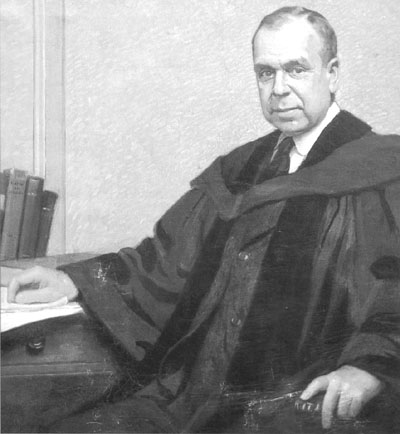 The following is a short excerpt from Machen’s essay, “The Responsibility of the Church in Our New Age.” This remarkably relevant work originally appeared in Annals of the American Academy of Political and Social Science in 1933. You can hear a reading of the full essay from this recent episide of Theology Simply Profound here (MP3). Here's the excerpt:

In the first place, a true Christian church, now as always, will be radically doctrinal. It will never use the shibboleths of a pragmatist skepticism. It will never say that doctrine is the expression of experience; it will never confuse the useful with the true, but will place truth at the basis of all its striving and all its life. Into the welter of changing human opinion, into the modern despair with regard to any knowledge of the meaning of life, it will come with a clear and imperious message. That message it will find in the Bible, which it will hold to contain not a record of man’s religious experience but a record of a revelation from God.

In the second place, a true Christian church will be radically intolerant. At that point, however, a word of explanation is in place. The intolerance of the church, in the sense in which I am speaking of it, does not involve any interference with liberty; on the contrary, it means the preservation of liberty. One of the most important elements in civil and religious liberty is the right of voluntary association – the right of citizens to band themselves together for any lawful purpose whatever, whether that purpose does or does not commend itself to the generality of their fellow men. Now, a church is a voluntary association. No one is compelled to be a member of it; no one is compelled to be one of its accredited representatives. It is, therefore, no interference with liberty of a church to insist that those who do choose to be its accredited representatives shall not use the vantage ground of such a position to attack that for which the church exists. . .

But when I say that a true Christian church is radically intolerant, I mean it presents the gospel of Jesus Christ not merely as one way of salvation, but as the only way. It cannot make common cause with other faiths. It cannot agree not to proselytize. Its appeal is universal, and admits of no exceptions. All are lost in sin; none may be saved except by the way set forth in the gospel. Therein lies the offense of the Christian religion, but therein lies also it glory and its power. A Christianity tolerant of other religions is just no Christianity at all. . . .

There are certain things which you cannot expect from such a true Christian church. In the first place, you cannot expect from it any cooperation with non-Christian religion or with a non-Christian program of ethical culture. There are those who tell us that the Bible ought to be put into the public schools, and that the public schools should seek to build character by showing the children that honesty is the best policy and that good Americans do not lie nor steal. With such programs a true Christian church will have nothing to do. . . .

In the second place, you cannot expect from a true Christian church any official pronouncements upon the political or social questions of the day, and you cannot expect cooperation with the state in anything involving the use of force. Its weapons against evil are spiritual, not carnal; and by becoming a political lobby, through the advocacy of political measures whether good or bad, the church is turning aside from its proper mission. . . .

The responsibility of the church in the new age is the same as its responsibility in every age. It is to testify that this world is lost in sin; that the span of human life — nay, all the length of human history — is an infinitesimal island in the awful depths of eternity; that there a mysterious, holy, living God, Creator of all, Upholder of all, infinitely beyond all; that He has revealed Himself to us in His Word; that there is no other salvation, for individuals or for nations, save this, but that this salvation is full and free, and that whosever possesses it has for himself  a treasure compared with which all the kingdoms of the earth — nay, all the wonders of the starry heavens — are as the dust of the street.

The Responsibility of the Church in Our New Age by J. Greshama Machen (MP3)