In Prayer We Come as Humble Suppliants for Mercy 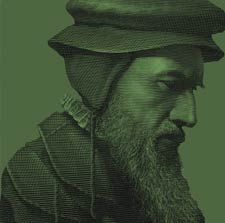 In prayer, we yield all confidence in ourselves and humbly plead for pardon

8. We come as humble suppliants for mercy

To this let us join a third rule: that anyone who stands before God to pray, in his humility giving glory completely to God, abandon all thought of his own glory, cast off all notion of his own worth, in fine, put away all self-assurance—blest if we claim for ourselves anything, even the least bit, we should become vainly puffed up, and perish at his presence. We have repeated examples of this submission, which levels all haughtiness, in God's servants; each one of whom, the holier he is, the more he is cast down when he presents himself before the Lord. Thus spoke Daniel, whom the Lord himself commended with so great a title: a"We do not pour forth our prayers unto thee on the ground of our righteousnesses but on the ground of thy great mercy. O Lord, hear us; O Lord, be kindly unto us. Hear us, and do what we ask … for thine own sake … because thy name is called upon over thy people, and over thine holy place" [Dan. 9:18–19, cf. Vg.]. Nor does he, by a devious figure of speech, as some men do, mingle with the crowd as one of the people. Rather he confesses his guilt as an individual, and as a suppliant takes refuge in God's pardon, as he eloquently declares: "When I had … confessed my sin and the sin of my people" [Dan. 9:20 p.]. David also enjoins this humility by his own example: "Enter not into judgment with thy servant, for no man living is righteous before thee" [Ps. 143:2; cf. Comm. and Ps. 142:2, Vg.]. In such a form, Isaiah prays: "Behold, thou wert wroth, for we sinned.… The world is founded upon thy ways, therefore we shall be saved.… And all of us have been full of uncleanness, and all our righteousnesses like a filthy rag; we all have faded like a leaf, and our iniquities, like the wind, scatter us. There is no one who calls upon thy name, who bestirs himself to take hold of thee. For thou hast hid thy face from us, and hast made us to melt away in the hand of our iniquities. Yet, O Lord, thou art our Father; we are the clay, thou art our potter and we are the work of thy hand. Be not angry, O Lord, and remember not iniquity forever. Behold now, consider, we are all thy people" [Isa. 64:5–9, cf. Comm.].

Observe that they depend on no assurance whatever but this alone: that, reckoning themselves to be of God, they do not despair that he will take care of them. Likewise, Jeremiah: "Though our iniquities testify against us, act … for thy name's sake" [Jer. 14:7]. For some unknown author, whoever he may be, has written these very true and holy words attributed to the prophet Baruch: "The soul that is sorrowful and desolate for the greatness of her evil, bowed down and feeble, … the hungry soul, and the eyes that fail give glory … to thee, O Lord. It is not for the righteousnesses of the fathers that we pour out our prayers before thee, and beg mercy in thy sight, O Lord our God" [Baruch 2:18–19 p., cf. Vg.]; but because thou art merciful, "be merciful unto us, for we have sinned before thee" [Baruch 3:2].

9. The plea for forgiveness of sins as the most important part of prayer

To sum up: the beginning, and even the preparation, of proper prayer is the plea for pardon with a humble and sincere confession of guilt. Nor should anyone, however holy he may be, hope that he will obtain anything from God until he is freely reconciled to him; nor can God chance to be propitious to any but those whom he has pardoned. Accordingly, it is no wonder if believers open for themselves the door to prayer with this key, as we learn from numerous passages of The Psalms. For David, asking for something else than remission of his sins, says: "Remember not the sins of my youth, and my transgressions; according to thy mercy remember me, for thy goodness' sake, O Lord" [Ps. 25:7]. Again: "See my affliction and my toil, and forgive all my sins." [Ps. 25:18 p.] Also, in this we see that it is not enough for us to call ourselves to account each day for recent sins if we do not remember those sins which might seem to have been long forgotten.

For the same prophet, elsewhere having confessed one grave offense, on this occasion even turns back to his mother's womb, in which he had contracted the infection [Ps. 51:5], not to extenuate the guilt on the ground of corruption of nature but that, in gathering up the sins of his whole life, the more rigorously he condemns himself, the more easily entreated he may find God. But even though the saints do not always beg forgiveness of sins in so many words, if we diligently ponder their prayers that Scripture relates, we shall readily come upon what I speak of: that they have received their intention to pray from God's mercy alone, and thus always have begun with appeasing him. For if anyone should question his own conscience, he would be so far from daring intimately to lay aside his cares before God that, unless he relied upon mercy and pardon, he would tremble at every approach.

There is also another special confession when suppliants ask release from punishments. It is that at the same time they may pray for the pardon of their sins. For it would be absurd to wish the effect to be removed while the cause remained. We must guard against imitating foolish sick folk, who, concerned solely with the treatment of symptoms, neglect the very root of the disease. We must make it our first concern that God be favorable toward us, rather than that he attest his favor by outward signs, because he wills to maintain this order, and it would have been of small profit to us to have him do us good unless our conscience, feeling him wholly appeased, rendered him altogether lovely [Cant. 5:16]. Christ's reply also reminds us of this; for after he had decided to heal the paralytic, "Your sins," he said, "are forgiven you" [Matt. 9:2]. He thus arouses our minds to that which we ought especially to desire: that God may receive us into grace; then, that in aiding us he may set forth the fruit of reconciliation.

But besides that special confession of present guilt, with which believers plead for the remission of every sin and penalty, the general preface that gains favor for prayers must never be passed over, for unless they are founded in free mercy, prayers never reach God. John's statement can be applied to this: "If we confess our sins, he is faithful and just to forgive …, and cleanse us from all unrighteousness" [1 John 1:9, Vg.]. For this reason, under the law prayers had to be consecrated with blood atonement [cf. Gen. 12:8; 26:25; 33:20; 1 Sam. 7:9] in order that they should be accepted, and that the people should thus be warned that they were unworthy of so great a privilege of honor until, purged of their defilement, they derived confidence in prayer solely from God's mercy.

10. Reference to one's own righteousness?

Now the saints sometimes seem to shout approval of their own righteousness in calling upon God for help. For example, David says: "Keep my life, for I am good" [Ps. 86:2 p.]; and similarly, Hezekiah: "Remember … O Lord, I beseech thee, how I have walked before thee in truth … and have done what is good in thy sight" [2 Kings 20:3 p.; cf. Isa. 38:3]. By such expressions they mean nothing else but that by their regeneration itself they are attested as servants and children of God to whom he promises that he will be gracious. He teaches through the prophet, as we have already seen, that his eyes "are upon the righteous, his ears toward their prayers" [Ps. 34:15; cf. 33:16, Vg.]. Again, through the apostle John: "We shall receive … whatever we ask if we keep his commandments" [1 John 3:22 p.]. In these statements he does not set the value of prayer according to the merits of works, but he is pleased to establish the assurance of those who are duly aware of guileless uprightness and innocence, as all believers ought to be. Indeed, what the blind man whose sight was restored says in John's gospel—that God does not listen to sinners [John 9:31]—has been drawn from the very truth of God, provided we understand "sinners" in the customary usage of Scripture, as all persons who slumber and repose in their own sins without any desire for righteousness. For no heart can ever break into sincere calling upon God that does not at the same time aspire to godliness. To such promises, then, correspond the saints' attestations, in which they mention their purity or innocence in order that they may feel, what all God's servants should hope for, made manifest to themselves.

Again, while they are before the Lord comparing themselves with their enemies, from whose iniquity they long to be delivered by his hand, they are commonly found using this sort of prayer. Now it is no wonder if in this comparison they put forward their own righteousness and simplicity of heart in order that, from the equity of the cause itself, they might the more move the Lord to provide them with assistance. The godly man enjoys a pure conscience before the Lord, thus confirming himself in the promises with which the Lord comforts and supports his true worshipers. It is not our intent to snatch this blessing from his breast; rather, we would assert that his assurance his prayers will be answered rests solely upon God's clemency, apart from all consideration of personal merit.

Institutes of the Christian Religion by John Calvin