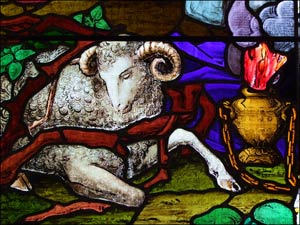 The following passage really makes up the heart of Paul's Epistle to the Ephesians. Here he reveals a great mystery which was hidden in previous ages:

"Therefore remember that at one time you Gentiles in the flesh, called "the uncircumcision" by what is called the circumcision, which is made in the flesh by hands" 12 remember that you were at that time separated from Christ, alienated from the commonwealth of Israel and strangers to the covenants of promise, having no hope and without God in the world. 13 But now in Christ Jesus you who once were far off have been brought near by the blood of Christ ... So then you are no longer strangers and aliens, but you are fellow citizens with the saints and members of the household of God, 20 built on the foundation of the apostles and prophets, Christ Jesus himself being the cornerstone, 21 in whom the whole structure, being joined together, grows into a holy temple in the Lord."

Notice in this passage that Paul speaks to Gentiles as having been previously separate and alienated from Israel and the covenants, but in Christ, Gentiles have become citizens of Israel. Being "brought near" was their modern day parlance for Jewish proselytes. Because verse 12 and verse 19 are separated by some text (which speaks of benefits in Christ) many do not pay attention to their close connection. Let's have a look then: Verse 12 "alienated from the commonwealth of Israel" is joined to (vr. 19) "you are no longer strangers and aliens". No longer aliens to what? No longer aliens to the commonwealth of Israel. That means that Gentiles who are in Christ are now "citizens" (v. 19) of Israel built as a house with Christ as the chief cornerstone. In other words, Jesus Christ is the True Israel of God (1) (its fulfillment and foundation) as are all who are joined in union to Him. To say it another way, both OT and NT saints who are in union with Christ are citizens of Israel according to this passage. Likewise we are partakers of its promises, according to another nearby passage:

"...the mystery of Christ, 5 which was not made known to the sons of men in other generations as it has now been revealed to his holy apostles and prophets by the Spirit. 6 This mystery is that the Gentiles are fellow heirs, members of the same body, and partakers of the promise in Christ Jesus through the gospel.

Partakers of what promise? The promises given to Israel through Abraham and others. And since the Paul elsewhere asserts that "the gospel was preached to Abraham beforehand" (Gal 3:8) (2), the OT and NT saints were both saved by the same grace in Christ and are members of the same body .... partakers of the same promises. The difference is simply (if you think about it organically) that one was a seedling and the other a full tree bearing fruit, so to speak, but both are part of the same plant; one in full maturity. The OT saints saw Christ from a distance in promises and shadows, yet in God's economy those regenerate were, even then, united to Christ, part of the same body and saved by the same blood ... the blood which the signposts of the temple sacrifices pointed to.

"And all these, though commended through their faith, did not receive what was promised, 40 since God had provided something better for us, that apart from us they should not be made perfect."(Heb 11: 39, 40)

Just as we can never separate the law from the lawgiver, we likewise cannot separate the benefits from the benefactor. Many in modern day evangelicalism have divided the people of God while Paul here was at pains to show them both in union with Christ. Since Paul stressed the importance of this lets look afresh at the Scripture beyond our traditions and errors regarding this issue. The Text of Scripture is not Israelocentric but Christocentric. Jesus himself bore witness to this: "You search the Scriptures because you think that in them you have eternal life; and it is they that bear witness about me." (John 5:39)

(1) Jesus Christ is the only human being to obey God's law. He is, therefore, the only True Jew to have ever lived. All other persons have broken covenant with God, yet partake of God's covenants through Christ. All who rely on the works of the law will perish. Again, Jesus was the lamb of God slain before the foundation of the world. Itr does not matter when people were born, they were saved only because of Christ. Old Testament saints have no other hope for salvation but Jesus Christ, even if their understanding of Him was darkened compared than ours. As Christians we are all reckoned to have obeyed God's law perfectly as we are united to Christ (2 Cor 5:21)

(2) Abraham was given the covenant of grace and so knew Christ from a distance. Although he may not have known the details of God's plan of redemption, God promised to bless the nations through him. Likewise, the YHWH of the OT is none other than Christ. While the revelation in the OT was shadow and NT fulfillment, the entire OT was about Jesus Christ, as Jesus himself declared. He is talking to Jews about the OT when He says, "You search the Scriptures because you think that in them you have eternal life; and it is they that bear witness about me." (John 5:39)