Are the Poor and Minorities Really Better off under Progressive Policy?
Incline my heart unto thy testimonies
If We Say that We Have No Sin, We Deceive Ourselves
On John 3:16
The Difference Between Legal & Gospel Mortification
I Will Meditate in Thy Precepts
Entire Resignation to God's Sovereignty
Download the Entire Monergism eBook Library (650+)
Spiritual Supplies For Difficulties & Persecution
J. I. Packer 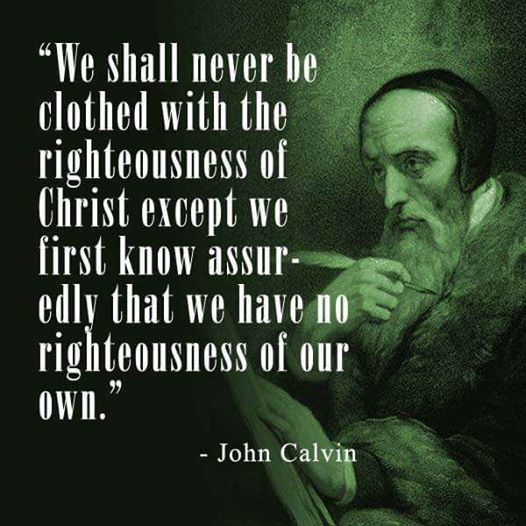 The following are some excerpts from a conversation I was having online with a friend who embraces a theory called moral constructivism.  It began after I posted the following quote by John Calvin.

Visitor: To me, it is a fact of free human reason that there will be different interpretations of what moral obligations we are under. That doesn't mean that there aren't basic moral values which guide our reason. These moral values are a part of human reason. Moral constructivism is not the same as moral relativism.

I think a theory of moral constructivism is superior to divine command theory as an account of moral obligation. I think we share a lot of the same reasons as to why obviously bad moral behavior is bad: murder, theft, etc. Obviously bad stuff and you won't find many modern people, let alone religious traditions, which do not proscribe these things. I may have mentioned Kohlberg's ideas about the stages of moral development of being kind of instrumental to me. Autonomy is the highest stage there. Divine command theory as a lifelong moral theory would be, on his account, a kind of imprisonment at a lower stage of moral evolution. I sort of understood Calvin (in this quote) to be going further down this path towards a view even more bizarre: there is no goodness possible from our own free actions but only because of divine dispensation or something like that. I couldn't resist plucking away at this. I can't see how such a view puts you in the proper relationship of control over your own mind and actions, as it appears that virtue (here) is about evacuating your personality that God might fill it. I have tried this and it is a long wait. Better take matters into our own hands.

What offends me about Calvin's idea here is that it supposes that our own virtue should be equivalent to God's and furthermore we should feel bad that it isn't. That's a heavy trip to lay on humanity: compare yourself to absolute perfection and measure up! Be ye perfect as your father in heaven is perfect? Really? That's bizarre to me. To demand moral rectitude/accountability is well within the ambit of constructivism.

Response: Calvin is not saying men cannot be moral. We know all persons can be moral, whether they are atheists or otherwise. We are moral creatures created in the image of God. No doubt there are some atheists who are more moral than I am in many ways. Calvin would agree but that is not what he is talking about here. He is not talking about relative morality between men and how to build a just society but rather how we become right before God. He is saying our own morality, as good as we may think we are is woefully insufficient for approaching God with. We need the righteousness of Christ to approach Him. You judge this as "bizarre". How do you know? Are you privy to the highest knowledge of God?. Bizarre is a value judgment which assumes that your own view is the truth, and Christianity is false. And how do you know that with such certainty? I propose that you could not possibly know this.

I was thinking a bit about what you said about moral constructivism and it seems that what you are talking about is along the lines that we can all arrive at morals in society through rational consideration which citizens of a country will probably accept through some kind of ideal conditions of choice, rather than appealing to metaphysical ideas of morality from something like Scripture. Is this correct?

Well, I largely agree with you --- Christians do not believe that human beings need some kind of divine dispensation or additional revelation in order to know right from wrong. Like you, we believe all human beings already know right and wrong innately because we are created in the image of God, who gave us a conscience which knows God's law, and know it simply by nature. In fact a non-Christian who has no Bible may behave better than a professing Christian who has one. Read the following texts from Romans and see this is basic Christian theology:

"13 For it is not the hearers of the law who are righteous before God, but the doers of the law who will be justified. 14 For when Gentiles, WHO DO NOT HAVE THE LAW, by NATURE do what the law requires, they are a law to themselves, even though they do not have the law. 15 They show that the work of the law is WRITTEN ON THEIR HEARTS, while their CONSCIENCE also bears witness, and their conflicting thoughts accuse or even excuse them 16 on that day when, according to my gospel, God judges the secrets of men by Christ Jesus." Rom 2:13-16

The problem is not that men do not know the law, it is that they DO KNOW IT and suppress it. People are not ignorant of the law and to resolve this problem simply need more data from the Bible. No. they demonstrate they are rebels because THEY DO KNOW IT, but don't obey even what they naturally know to be true. Again, check out Romans:

"...by their unrighteousness SUPPRESS the truth. 19 For what can be known about God is plain to them, because God has shown it to them. 20 For his invisible attributes, namely, his eternal power and divine nature, have been clearly perceived, ever since the creation of the world, in the things that have been made. So they are without excuse. For although they KNEW God, they did not honor him as God or give thanks to him, but they became futile in their thinking, and their foolish hearts were darkened" Rom 1:18-21

This is a universal declaration... People without the law KNOW GOD declares the Bible... they know the law.. it is written on their hearts ...That I know the truth of the Law has no bearing on the fact that I resist it and want to be autonomous from it.

So you and I would agree that we can appeal to reason to form some kind of just laws on society ... because being in the image of God we already know what is right.

But again, this has nothing to do with the statement from Calvin. . He is not here talking about how to solve practical problems in society. He is referring to the ultimate purpose from which we are made. That God's laws have been broken and while we should do good works, we cannot be justified by them. They do not outweigh the offense we have made against a holy God. But thanks be to God, He is merciful and in Christ does not treat us as our sins justly deserve. We have no righteousness of our own, that is, we cannot earn favor with God by good works, but need the righteousness of Christ to be reconciled to Him. This does not free us from good works, but frees us from a wrong opinion of good works, that they can somehow justify us before God.

So I think Calvin and I were talking about a completely different subject that what your comments were suggesting. You may disagree with Calvin but not for the reasons you stated.

Are the Poor and Minorities Really Better off under Progressive Policy?
A Treatise of Divine Providence (eBook)
Stephen Charnock
Christ Crucified the Only Proper Gospel-Sacrifice
Thomas Wadsworth
The Distinctive Doctrines of the Heidelberg Catechism
George W. Richards
Pastoral theology; a treatise on the office and duties of the Christian pastor
Patrick Fairbairn
The Dark Side of Eternity: Hell as Eternal Conscious Punishment
Robert Peterson
How Do We Form Boys into Men? On Teleological Complementarity
Owen Strachan
The Fragrance of Union with Christ
Curated Resources
The Gods of the Prosperity Gospel: Unmasking American idols in Africa
Dieudonné Tamfu
Five Points for All Peoples: How Reformed Theology Is Transforming Africa
Dieudonné Tamfu
Why You Can Trust the Bible
Peter Krol
Christian, This is How You Can Stand Firm in Dark Days
Colin Smith
When Satan is in the Church...
Nicholas T Batzig
Principles for Flourishing
Ben Franks
The Grace of Election - Deuteronomy 7:6-7
Timothy J Keller
The First Epistle of John: Expounded in a Series of Lectures (eBook)
Robert S Candlish
Understanding and Engaging A Secular Age
Curated Resources
The Sufficiency of Scripture
Dave Jenkins
The Most Important Thing You Will Ever Do
Jonathan Landry Cruse
“Christian Worldview” By Herman Bavinck
Curated Resources
Jonathan Edwards’ Complex Views on Race
Rev Matthew Everhard
The Economy of Our Trinitarian Discourse
Curated Resources
The Quran with Christian Commentary: A Guide to Understanding the Scripture of Islam, by Gordon D. Nickel
Curated Resources
Preparing Our Hearts for Exile
Stephen Roberts
Our Weakness Is a Platform for God’s Grace
Paul Tautges
Three Benefits of Paul’s “Thorn in the Flesh”
Paul Tautges
Why China might have had the largest unknown modern Calvinist revival movement in recent history
William Huang
How Progressive Christianity Preaches Another Gospel
Ian Harber
How the Gossip Machine Turns Desire into Sin
Joe Carter
An Analogy for Sin that Hits Home
Curated Resources
Covenant Theology: Understanding God’s commitment to us has implications for our security, gratitude, and service
Dr J Ligon Duncan III, Richard Belcher, J V Fesko
Warnings Against Apostasy II
Michael J Kruger
Warnings Against Apostasy I
Michael J Kruger
Warnings Against Apostasy (Again)
Michael J Kruger
The Cure for Apostasy
Michael J Kruger
What is the gospel according to Abraham?
J. Nicholas Reid
Humble Yourself — Like God The Power of Christ’s Lowliness
David Mathis
Introducing the ‘Institutes’ A Guide to Reading Calvin’s Classic
Shawn Wright
A Covenantal Benediction
Dr J Ligon Duncan III
A Biblical Approach to Protest
Carl Ellis
The Council of Nicaea did not create the canon of Scripture
John D. Meade
Would Someone Tell Me What 2 Thessalonians 2 Means?!
Guy Waters
How to Stop Being Afraid of People, So You Can Start Getting Stuff Done
Reagan Rose
Should I Preach Without Notes?
Kevin DeYoung
Why White Fragility Fails
Denny Burk
Do we matter to God? (5-Part MP3 Series)
Dick Lucas
Words of comfort on knowing God (4-Part MP3 Series)
Dick Lucas
A Collection of the Promises of the Gospel (eBook)
John Colquhoun
The Happiest Place in the Universe
D. Blair Smith
The Suffering of Joseph and Jesus
Jonty Rhodes