How We Ought to Respond to Difficult Providences 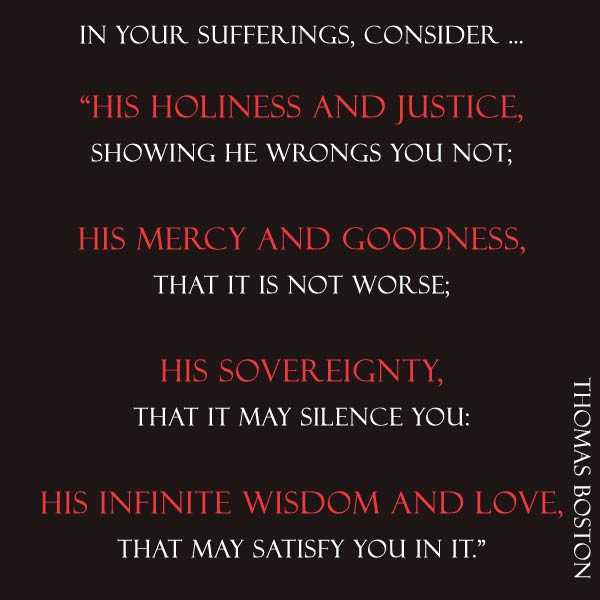 "Consider His holiness and justice, showing he wrongs you not;

His mercy and goodness, that it is not worse;

His sovereignty, that it may silence you:

His infinite wisdom and love, that may satisfy you in it."

A spirit brought down to their lot.

Their lot is a low and afflicted one; but their spirit is as low, being, through grace, brought down to it. We may take it up in these five things:

(1.) They submit to it as just. Micah 7.9, “I will bear the indignation of the Lord, because I have sinned against Him.” There are no hardships in our condition, but we have procured them to ourselves; and it is therefore just that we kiss the rod, and be silent under it, and so lower our spirits to our lot. If they complain, it is of themselves; their hearts rise not up against the Lord, far less do they open their mouth against the heavens. They justify God, and condemn themselves, {72} reverencing His holiness and spotless righteousness in His proceedings against them.

(2.) They go quietly under it as tolerable. Lam. 3.26-29, “It is good that a man should both hope and quietly wait for the salvation of the Lord. It is good for a man that he bear the yoke in his youth. He sitteth alone, and keepeth silence, because he hath borne it upon him; he putteth his mouth in the dust, if so be there may be hope.” While the unsubdued spirit rages under the yoke as a bullock unaccustomed to it, the spirit brought to the lot goes softly under it. They see it is of the Lord’s mercies that it is not worse; they take up the naked cross, as God lays it down, without those overweights upon it that turbulent passions add thereunto; and so it becomes really more easy than they thought it could have been, like a burden fitted on the back.

(3.) They are satisfied in it, as drawing their comfort from another quarter than their outward condition, even as the house stands fast when the prop is taken away that it did not lean upon. “Although the fig-tree should not blossom, neither fruit be in the vine,—yet I will rejoice in the Lord,” Hab. 3.17,18. Thus did David in the day of his distress. “He encouraged himself in the Lord his God,” 1 Sam. 30.6. It is an argument of a spirit not brought down to the lot, when men are damped and sunk under the hardships of it, as if their condition in the world were the point whereon their happiness turned. It is want of mortification that makes men’s comforts to wax and wane, ebb and flow, according to the various appearances of their lot in the world.

(4.) They have a complacency in it, as that which is fit and good for them, Isa. 39.8; 2 Cor. 12.10. {73} Men have a sort of complacency in the working of physic, though it gripes them sore; they rationally think with themselves that it is good and best for them: so these lowly souls consider their afflicted lot as a spiritual medicine, necessary, fit, and good for them; yea, best for them for the time, since it is ministered by their heavenly Father: and so they reach a holy complacency in their low afflicted lot.

The lowly spirit extracts this sweet out of the bitterness in his lot, considering how the Lord, by means of that afflicting lot, stops the provision for unruly lusts, that they may be starved; how He cuts off the by-channels, that the whole stream of the soul’s love may run towards Himself; how He pulls off and holds off the man’s burden and clog of earthly comforts, that He may run the more expeditiously in the way to heaven.

(5.) They rest in it, as what they desire not to come out of, till the God that brought them into it see it meet to bring them out with His good will, Isa. 38.16. Though an unsubdued spirit’s time for deliverance is always ready, a humble soul will be afraid of being taken out of its afflicted lot too soon. It will not be for moving for a change, till the heaven’s moving bring it about: so this hinders not prayer and the use of appointed means, with dependence on the Lord; but requires faith, hope, patience, and resignation, 2 Sam. 15.25,26.

Source: The Crook in the Lot by Thomas Boston

When Job's children and material goods were taken away.
And he said,

“Naked I came from my mother’s womb, and naked shall I return. The LORD gave, and the LORD has taken away; blessed be the name of the LORD.” - Job 1:21

“Behold, I am of small account; what shall I answer you? I lay my hand on my mouth" John 40:4
----
King Nebuchadnezzar, after being humbled by the LORD"
"At the end of that time I, Nebuchadnezzar, looked up toward heaven. My mind became clear again. Then I praised the Most High God. I gave honor and glory to the One who lives forever. His rule will last forever. His kingdom will never end. He considers all of the nations on earth to be nothing. He does as He pleases with the powers of heaven. He does what He wants with the nations of the earth. No one can hold His hand back. No one can say to Him, “What have you done?”
My honor and glory were returned to me when my mind became clear again. The glory of my kingdom was given back to me. My advisers and nobles came to me. And I was put back on my throne. I became even greater than I had been before.
Now I, Nebuchadnezzar, give praise and honor and glory to the King of heaven. Everything he does is right. All of his ways are fair. He is able to bring down those who live proudly." - Daniel 4:34-37
----
Or those eighteen on whom the tower in Siloam fell and killed them: do you think that they were worse offenders than all the others who lived in Jerusalem? 5 No, I tell you; but unless you repent, you will all likewise perish.” Luke 13:4-5