"Those who are passed over by God will never complain that God is being unfair. Left to themsleves, they have no desire to be chosen." - Ian Duguid 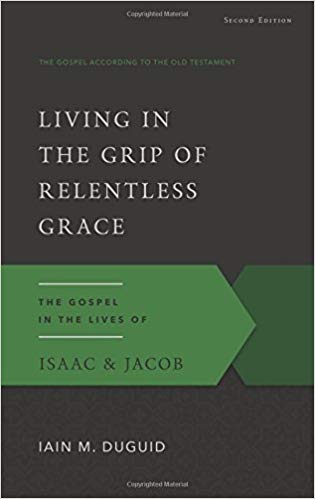 The doctrine of election is a difficult one for many people. They struggle with the justice of the idea that God chooses some for salvation and passes over others. Some people, therefore, have argued that it is a matter of God's foreknowledge. God knows in advance which people are going to choose him, and therefore he responds by choosing them. The Bible, however, is clear. God's love for his chosen people existed long before their birth, all the way back to the foundation of the world (Eph. 1:4-5). God does not love us because he foresaw we would love him. Rather, we love God because he loved us from the first (Rom. 9:16).

Yet, as we pointed out earlier, even though God's election is sovereign, it is not arbitrary or unjust. It is not as if Esau desperately wanted to be a chosen son and God harshly turned him away, not allowing him a place among his chosen people. No, Esau has twice turned his back on his spiritual birthright. First, he sold his birthright to his brother for a bowl of lentil soup (Gen. 25:31:34). Now he compromised the fundamental goal of God's election: the creation of a separate, holy people for God. Under the circumstances, Esau could have no complaints about being passed over.

We should also notice, however, that Jacob is not chosen because, in contrast to Esau, he is such a wonderful person. Jacob shows himself to be a scheming, conniving, calculating little rat, especially during the first part of his life. Nonetheless, because God's choice rests upon him out of his sovereign mercy, God is going to work on Jacob, reshaping him, purifying him into a person he can use. Neither Jacob nor Esau deserves God's grace in his life, but God's sovereign mercy rests upon Jacob for his blessing, and so his grace begins the transforming work in his heart.

So it is also for us. Our election and our salvation are entirely of grace. God did not choose you because you were better or smarter or more beautiful or holier than everyone else. God did not choose you because he foresaw that you would exercise faith while others wouldn't. God chose us while we were still filthy sinners, because of his electing grace. Even with his transforming power at work in our hearts, thou, the best of saints make only small beginnings on the path of holy living. We never outgrow our need for grace while we live on earth.

But God's sovereign choice on salvation is not arbitrary. Those passed over by God have no cause for complaint. Their condemnation is thoroughly deserved. Even though we plead with them with tears to abandon their self-destructive course and find salvation in Jesus Christ, they will have none of it. The whole idea is foolishness to them. Those whom God chooses, he then begins to reshape into a people for his pleasure. As Ephesians 1:4 puts it, He chose us . . . to be holy and blameless in his sight. The result is that those chosen have no cause of arrogance. Their justification is undeserved by them. It is merited only by the righteousness of Christ that is credited to their account, and it is worked on them by the indwelling power o the Holy Spirit. All is of God, so that God may receive all the glory.

That truth should give us boldness in our sharing of the gospel. We may freely call all who will come to Jesus and be saved. The invitation to the party is open to all. Whoever you are, whatever you have done, your sins too can be paid for by the death of Jesus on the cross. No one is too guilty or too defiled to come. You too can receive Christ's righteousness credited to your account. You too can participate in the feast that God has prepared for all who are his people on the final day. It's a genuine offer, and we pray fervently and intently that many people will respond to it in faith. But we trust the outcome of our evangelism to the care of a good God, who chose a people who would be his before the foundation of the world.

That too is a comforting thought, given the imperfection of so much of our gospel witness. It is God who determines the outcome of our speaking for him, not the quality of our speech. It is God's choice whither our words fall on the ears of an Esau, to whom they are all nonsense, or on the ears of a Jacob, for whom the road to faith may be long and hard but will eventually bring him to glory. It is God's choice whether our words fall on the ears of an Abraham who is ready now to hear and trust and believe. We therefore invite all to come to Christ of receive the living water from him, confident that all those whom the Lord our God is calling to himself will hear his voice and will come. To him indeed be all the glory.

This truth should also give us great joy on the midst of our manifold sins and failures. Do you know yourself to be a sinner in God's sight? Are there areas of your life where you continue to fail God over and over again? If so, the bad news is that you are normal. But the good news is that if God has laid hold of you by his electing grace, he will sustain you by that grace through every step of your earthly journey. He will use even that son which you find so difficult to combat as a means of driving you back to the cross. And one day, at the end of all things, you too will be purified completely by his grace and will stand before him without fault or blemish. What a wonderful, heartwarming, comforting, doctrine the doctrine of God's election is!
-----
Iain Duguid, Living in the Grip of Relentless Grace: The Gospel in the Lives of Isaac and Jacob (P&R, 2002), 27-29.

Assurance of Salvation (MP3)
Darrell B. Harrison
The New Birth (MP3)
Voddie Baucham
Heaven and Hell Are Real
Albert Mohler
A Conversation with J I Packer & Mark Jones
J I Packer, Mark Jones
Does BLM Represent "the" Black Voice?
Thaddeus Williams, Chantal Monique Duson
The New Religion Of The Woke Left Is A Faith Without Atonement
Tripp Parker
Critical Theory vs Critical Thinking
Tim Stratton
Looking for that Blessed Hope: Exposition of Titus 2:11-14 (eBook)
Thomas Manton
Blessed Are the Poor in Spirit
Camden Bucey
Covenant of Works - Discussion handout
Jeffrey Waddington, Camden Bucey
The Covenant of Works (MP3)
Camden Bucey, Jeffrey Waddington
My Own Personal Jesus
Keith Mathison
Why Study the Book of Ecclesiastes?
Justin S Holcomb
A Treatise on the Life of Faith (eBook)
Thomas Manton
The Fullness of Joy
R C Sproul
A Biblical Response to Social Justice: Live Conversation with Thaddeus Williams
Thaddeus Williams, Sean McDowell
Americans Don’t See Human Life as ‘Sacred’—But See Humanity as ‘Basically Good’
Joe Carter
Six Reasons the Church in America is Becoming Increasingly Impotent
Darrell B. Harrison
Confronting Injustice Without Compromising Truth
Thaddeus Williams
The Christian Light in This Present Darkness
Jason Helopoulos
The Armor Of God: Being Strong Against Satan
Daniel Hyde
Bondservants and Masters
Alistair Begg
10 Key Bible Verses on Obedience
ESV Bible
5 Myths about Hell
Mark Jones
Why we need the book of Revelation right now (and always)
Chad Ashby
Did Moses write all of the Pentateuch? (Even his own obituary?)
Richard McDonald
The Prayers of the Saints
Richard Holdeman
I’m Not Hateful, You Are
David French
Act Like Men (YouTube)
Dr. John MacArthur
The More I See of Jesus
God’s Visible Media: The Sacraments In A Digital Age
Daniel Hyde
Critical Race Theory
Neil Shenvi
Margaret Sanger Statues Honor a Racist and Eugenicist; but as with Darwin, Let Her Stay
David Klinghoffer
Are We There Yet?
Paul Wolfe
A Liberating Theology
Donny Friederichsen
Why Is “Be True to Yourself” a Bad Philosophy?
Dr J Ligon Duncan III
The Dead Sea Scrolls
John Currid
The Method of Grace: The Work of the Holy Spirit in Applying the Redemptive Work of Christ (eBook)
John Flavel
The Theology of Riots: Part I
Christian McShaffrey
The Theology of Riots: Part II
Christian McShaffrey
The Resurrection: Historical Reliability
Ray Heiple
How to Pray for Your Kids This Summer
Sam Crabtree
The Power of Double Listening
Tim Chester
Sexual Sanctification Is Not the Absence of Temptation
Christopher Yuan
Small Decisions Matter: Discernment for Everyday Life
Ed Welch
Train Up a Child? - Proverbs 22:6?
W Robert Godfrey
Systemic Racism, God’s Grace, and the Human Heart: What the Bible Teaches About Structural Sin
Albert Mohler
How Welfare Undermines Marriage and What to Do About It
Robert Rector
Thou Hast Loved Righteousness, and Hated Iniquity - Hebrews 1:9
Thomas Manton
What is the Reason You Abstain From Sin?