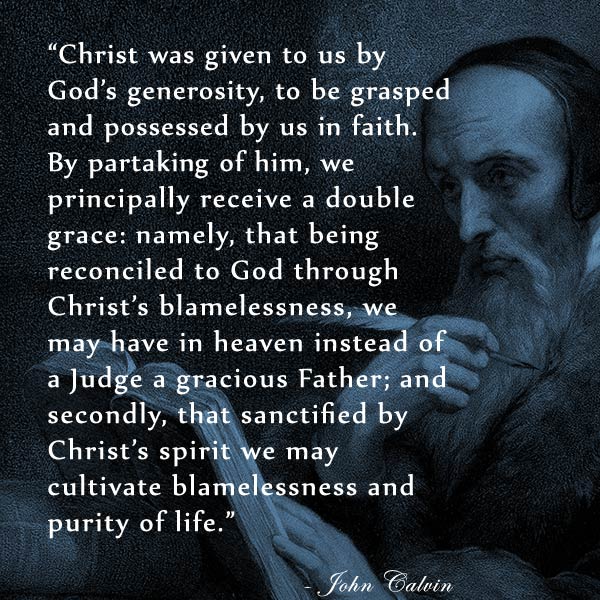 When the Holy Spirit regenerates a man and joins him to Christ, He shows him the heinousness of his sin. Seeing he cannot save himself from it, the sinner appeals to Christ to deliver him both from 1) sin's guilt and 2) from its power; from God's wrath and from sin's bondage; to not only justify him, but to sanctify him --- to apply the double cure. Christ did not die for our sin so we could have peace with sin but so that we would go to war with sin. No regenerate man says 'Lord forgive my guilt but leave me in my bondage to my sin.' No, by the grace of God, he flees from sin to Christ for salvation - salvation from God's wrath as well as deliverance from our sinful self, for the power of the Spirit to put off sin. So unlike some modern teaching, salvation does not merely consist of being delivered from God's wrath but includes much more. Many in the justification-only crowd and some liberal theologians have used this theology as an excuse to live in sin. But as J. I. Packer once said, "A half-truth masquerading as the whole truth becomes a complete untruth."

That is why those who teach that in the Christian life we need not yield to Him as Lord but only as Savior, have misunderstood that when we appeal to Him to rescue us from sin's captivity as Savior we are, in fact, yielding to Him as Lord. Remember, Christ does not save us 'in our sins' but "from our sins" (Matt 1:21); from sin's captivity over us.  He came not only to forgive sins but to liberate the captives from it (Luke 4:18). Does that mean that we will be without sin or that if we are not doing well enough we have to begin to worry about our salvation?  No, on the contrary, as John MacArthur wisely points out, "if we could lose our salvation, we would."  It is not about perfection but direction -- the grace of the Holy Spirit which has given us a new heart with new dispositions, changes the direction of out thinking, changes our desires so we now want to be free from the shackles of the world, the flesh and the devil. No one who is regenerate will be at peace with sin. The fact that you struggle with sin and worry about it reveals that the Spirit is at work in you.   It means that the new principle of grace inside us makes us mourns over sin and so we appeal for God's help to overcome it. And with God's help it is not burdensome because we have been born again (1 John 5:2-4).

John Calvin speaking of these different aspects of salvation said,

“Christ was given to us by God’s generosity, to be grasped and possessed by us in faith. By partaking of him, we principally receive a double grace: namely, that being reconciled to God through Christ’s blamelessness, we may have in heaven instead of a Judge a gracious Father; and secondly, that sanctified by Christ’s spirit we may cultivate blamelessness and purity of life.” - John Calvin (Inst. III.11.1)

The double cure is reconciliation to God through Christ and includes both justification and sanctification. Calvin further clarifies,

"Now if it is true - a fact abundantly clear - that the whole of the gospel is contained under these two headings, repentance and forgiveness of sins, do we not see that the Lord freely justifies his own in order that he may at the same time restore them to true righteousness by sanctification of his Spirit? Since both kinds of grace are received by faith, as I have elsewhere proved, still because the proper object of faith is God's goodness, by which sins are forgiven, it was expedient that it should be carefully distinguished from repentance." (Inst. III.3.19)

In Calvin’s own words:

Since faith embraces Christ, as offered to us by the Father [cf. John 6:29] – that is, since he is offered not only for righteousness, forgiveness of sins, and peace, but also for sanctification [cf. 1 Cor. 1:30] and the fountain of the water of life [John 7:38; cf. ch. 4:14] – without a doubt, no one can duly know him without at the same time apprehending the sanctification of the Spirit. Or, if anyone desires some plainer statement, faith rests upon the knowledge of Christ. And Christ cannot be known apart from the sanctification of his Spirit. It follows that faith can in no wise be separated from a devout disposition. (Inst. III.II.8)

Christ is both our justification and sanctification. Our obedience flows from the cross, it does not contribute to it.... It is a fruit of our union with Christ not the root. It all points to Christ and not to us.  In the famous Hymn, Rock of Ages, Augustus Toplady gives us the same kind of sound theology from the Scripture and perhaps had in mind Calvin's use of the phrase "double grace" when writing it:

Rock of Ages, cleft for me, Let me hide myself in Thee; Let the water and the blood, From thy wounded side which flowed, Be of sin the double cure, Save from wrath and make me pure. - Augustus Toplady

So you also must consider yourselves dead to sin and alive to God in Christ Jesus. Let not sin therefore reign in your mortal bodies, to make you obey their passions. Do not present your members to sin as instruments for unrighteousness, but present yourselves to God as those who have been brought from death to life, and your members to God as instruments for righteousness. (Rom. 6:11-13)