To Cut off the Sinner from All Hope in Himself 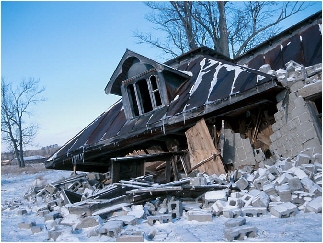 One of the most prevalent motifs that runs through the whole Bible is its constant reminder of the insufficiency of man. While this may seem all too obvious, we need constant reminding of this critical truth in our everyday lives. This truth may be self-evident when we consider the non-Christian, because we know he or she has no hope apart from Christ's mercy. But perhaps less obvious, is recognizing how this truth is so critical for the regenerate Christian who must continually be aware that apart from Christ we can do nothing; we can neither grow in grace nor have anything to offer to God. (John 15:5) This is not only clear in those parts of the Scripture which are propositional but are also quite pervasive in the gospel narratives. If you read closely about the events associated with Christ's earthly ministry, it becomes obvious that deliverance occurred in individuals only when they exhauted their own resources, were so desperate that they came to an end of themselves and were reduced to begging, if you will. Grace works salvation in us, not as we are, but first humbles our pride, revealing our spiritual bankruptcy, moral impotence, causing us to have a broken spirit - things which none of us naturally (apart from grace) are ready to recognize and confess. For our true condition before God is that we cannot even lift a finger toward our salvation, and can bring nothing to God except that which He first grants us in Christ, which includes both the humility to acknowledge our captivity to the yoke of sin and our desperate need of the Savior Jesus Christ (including a new heart which trusts in Him). The same dependent disposition must continue throughout the Christian life.

In the gospels, the first reaction to an encounter with Jesus was often a holy fear or dread when confronted with His capacity to provide that which they were insufficient to provide for themselves. A quick example is when Peter was fishing all night and then in the morning was commanded by our Lord to cast the net to the other side of the boat to catch fish, Peter immediately took in such a load of fish that the boat began to sink. Peter’s reaction was holy fear and a desire to get away for the Lord for in it He saw his own sinfulness.

In desperation, after the disciples woke Jesus from sleep on the turbulent sea, Jesus calmed the waves, “And they were filled with great fear and said to one another, "Who then is this, that even wind and sea obey him?" (Mark 4:41)

After Jesus cast the demons into the herd of swine, those who saw it ran off to report it and when others….”came to Jesus and saw the demon-possessed man, the one who had had the legion, sitting there, clothed and in his right mind, and they were afraid.(Mark 5:15)

There was also a woman who was bleeding for 12 years that touched Jesus garment. After being healed “…the woman, knowing what had happened to her, came in fear and trembling and fell down before him and told him the whole truth.” (Mark 5:33)

Then lastly the crowd was astounded after Jesus raised the twelve year old dead girl to life. (Mark 5:42)

Take note, in each story, as in many more stories in the gospel narratives, people have come to Jesus to help solve some problem after all possible human means have been exhausted, many times after years of trying. The result was often people falling at Jesus’ feet. In contrast, the proud who failed to see their own desperate condition, had no such reaction. and Jesus responded, "If you were blind you would not be guilty of sin, but now that you claim you can see, your guilt remains." We are not quick to learn this lesson, i.e. that we are a dependent people and have nothing in ourselves and can do nothing apart from Jesus. But our constant posture befoere God must be to recognize that everything which we can do, we can only thank Him for. God reaches us when we find ourselves in desperation because we so often wrongly trust in our own boasted self-sufficiency. But Jesus calls us to pray always .. because prayer is a posture of looking away from ourselves for help to the only One who can provide it. The Bible uses these stories, most importantly, to exhibit our own helplessness, a situation which we universally, as human beings, cannot resolve.

It seems that Jesus brings about events in our lives that will reveal our insufficiency so that we might find Him. For as long as we pridefully think all we can help ourselves (even a little), He remains hidden. But take note, it is by the grace of God we are what we are, which means that even the very humility needed to recognize the truth and excellency of Jesus does not come naturally. It is a gift of grace. onsider that when Peter acknowledged Jesus was the Christ, the Son of the living God, Jesus quickly quenched any pride that might rise up in Peter by reminding him that even his very understanding of this was not revealed by flesh and blood but by His Father in heaven. (Matt 16:17) This strips man of all possible hope in himself, even to understand or lift a finger toward God. Christ is awakened, as it were, when he hears us pray, for then we no longer are looking to our own resources nor think we have the ability in ourselves.

The common thread through these stories, and many like them in Scripture, is a revelation of man’s utter insufficiency. This is really the last thing the natural man wishes to hear, so he suppresses this truth, but Jesus keeps reminding us that true faith can only be a humble faith. That is, a disposition of a beggar reduced to desperation which abases oneself and exalts God alone. No one can be a true believer unless they truly believe they justly deserve the wrath of God save in Christ’s mercy alone, having no confidence in the flesh (Phil 3:3). The will of the true Christian is bowed and despairs of all hope in himself – and can only find solace, peace and hope in Christ. We see the effects of grace working in a person when they come to the end of themselves and their own resources. Only as we become sensible of our own inadequacy and helplessness and our pride is mortified does it become apparent that Christ has done a work of grace us. For even the very humility to believe does not come by nature, but by grace. There is nothing more essential to true religion. The only door we can enter heaven is extremely low, such that we must crawl on our hands and knees to enter. True faith trusts God’s righteousness and excellence, not our own.

Psalm 34:18
The LORD is near to the brokenhearted
and saves the crushed in spirit.

Psalm 138:6
For though the LORD is high, he regards the lowly,
but the haughty he knows from afar.

Isaiah 57:15
For thus says the One who is high and lifted up,who inhabits eternity, whose name is Holy:"I dwell in the high and holy place,and also with him who is of a contrite and lowly spirit,to revive the spirit of the lowly,and to revive the heart of the contrite.

Isaiah 66:2
But this is the one to whom I will look:
he who is humble and contrite in spirit
and trembles at my word.

Matt 5:3
3"Blessed are the poor in spirit, for theirs is the kingdom of heaven.

This humility is the first essential thing pertaining to the true faith – to renounce all natural self-exaltation, and glory only in Christ. If you are a Christian, prayer (or the lack thereof) reveals whether you are emptied of self and trusting in Christ or trying to accomplish things in your own strength.  Only the former advances the kingdom of God.

How does this affect our preaching to unbelievers. In every way. Ichabod S. Spencer once said, "To cut off the sinner from all reliance upon himself, his merits and his powers; and throw him, naked and helpless, into the hands of the Holy Spirit to lead him to Christ in faith; should be the one great aim of the ministry."

If a preacher (or a doctrine) nourishes a good opinion of man, he is spawning a dangerous error, for all men naturally are a god to themselves. They need little further encouragment to think even more highly of themselves. Consider this: if the carpenter working on your house tells you that your entire house is rotten and eaten through with termites, and thus must be torn down and a entirely new house buit in its place, but a second carpenter tells you that's its ok, you don't need to worry, that the house will probably stand and only needs a little reinforcement at minimal cost ... most people would be naturally willing to listen to the later. The first carpenter's advice is too drastic, you think, but you know the first one is right. Likewise, Christ comes to us and, in love, informs us that our natural state is rotten and and the old frame of the house must come down so that a new one can be built in its place. its devastating news. But the synergist comes in with his corrupt doctrine which enflames the pride of man by telling him that he is not as far gone as the other asserts. God merely need superadd grace to what you already have. (William Gurnall) No, says Christ, "unless a seed falls to the ground and die, it remains a single seed" ... and "he that would save his life must lose it."

Yes we must pay our debts in full, but thanks be to God, Christ pays our debts for us. Send your conscience and Satan to Christ and let them make a charge against Him, who is now sitting at God's right hand incerceeding for you, to clear all your accounts.

"Under the covenant of grace, duty is required, but strength is promised too, Ezek. xxxvi. 27" (Thomas Boston)