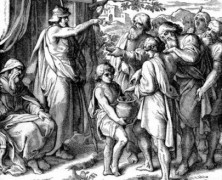 Visitor: Is God willing to prevent evil, but not able? Then he is impotent. Is he able, but not willing? Then he is malevolent. Is he both able and willing? Then where does evil come from? Is he neither able nor willing? Then why call him God?" Why don't we talk about the old testament?. Why don't you explain to me all the stories of the old testament. Oh wait that's right we don't talk about the old testament because it's full of rape, murder, slavery, homophobia, & god murdering people &making people sacrifice their Children. And why is it not in the 10 commandments that we shall not rape or own people as slaves. Please Rape all you want & treat humans & women as if they were dirt but don't say the lord's name in vein or he'll get upset.

Response: Thank you for your comment. Appreciate your participation ...

To answer your question about God's willingness ... God is willing and he has defeated evil in the Person of Jesus Christ. God Himself came in the flesh to absorb the full punishment for the evil perpetrated by humans, so that all those who are united to Him would have eternal life. That is the WHOLE POINT OF CHRISTIANITY. God is willing to do something about the evil... even deliver, love and forgive the perpetrators of it, like me. There is no greater love or willingness than this.  We may undergo fleeting, momentary suffering now, but it is as nothing.compared to when this moment in the present age is past ... it will be as if it were a small scratch .. God has a purpose and uses the evil of men to achieve a greater ultimate good which outweighs them all. But many who only see the suffering of the moment, which is very real, will be unable to see past it ... but in Jesus all that is wrong will be made right.

Next, you realize you are making a moral argument against God? Please do not fail to see the irony in this.  What standard are you appealing to to demonstrate to us that your morality is the right one? It seems to me that you are making up morality, as you go, according to your own self-declared authority and requiring the rest of us to abide by it. (i.e.. that somehow God is immoral for specific acts?) Immoral according to who? You? Since you seem to know what is objectively right and wrong you already demonstrate a belief in a transcendent God who has revealed himself. Otherwise, unless you know what is actually moral and immoral, telling us how God should behave is utterly incoherent and unintelligible.  Therefore, your so-called proof against God is self-defeating. For in it you acknowledge there is such a thing as objective evil that exists. In order for there to be objective evil you have to appeal to some objective standard outside of yourself that everyone is subject to. But whose standard are you appealing to that you would call objective? If there is no God you cannot call anything good or evil ... all is relative and so you cannot consistently complain about anyone else's standards no matter how much they may offend you.

Lastly, I would encourage you to learn more about Christianity and especially the Old Testament if your are going to argue against it. It seems you are quite misinformed about it and have created many straw man arguments... ideas that neither Christians nor the Jews of the OT ever believed... Learning things 3rd hand from media or classroom is susceptible to propaganda ... so if you want to debate, first represent the facts of your opponent clearly and accurately:

1) Chattel slavery (the buying and selling of captured slaves) was not only not encouraged, but was punishable by death in the OT (Exodus 21:16). What you are calling slavery in the OT was indentured servitude.. people paying off debts, contractual agreements between two parties etc... Also in Israel,  they were to grant their servants release every seventh year with all debts forgiven (Leviticus 25:35--43). There were no prisons at the time and paying for your crimes through service was also a form of restitution.  The isralites were actually commonly told by God to to treat outsiders well, remembering that they themselves were slaves in Egypt.

2) Sacrifice of children: You have got this backwards. God never had the people of Israel sacrifice their children. In fact, this detestable practice was one of the main reasons God had Israel remove the previous occupants from the land (Deut 18:9-14)

3) Homophobia? Homosexual practice was just one among many, many sins that were punishable by death in the old testament. So was sacrificing your son or daughter in the fire, divination, worshipping any god other than the true God .. all of these and many more were punishable by death. No one singled out homosexuality more than any of these other sins.  Truth be told, we have all committed sin worthy of death, I will be the first to raise my hand to acknowledge my complicity in rebellion against God... but thanks be to God, Jesus, when I was ill-deserving, still bore the penalty for them ...

The death penalty is still active for all the sins of the Old Testament... They have not been done away with, just delayed.  Jesus delays the punishment for them until He returns to rule the world. Now is a time of mercy where we call all people everywhere to repentance and faith in Christ for complete forgiveness and all who ally themselves with Him, no matter how bad, including homosexuals ... and amazingly even includes people like me who has committed much worse sins than that .... Fact is the Bible would only be homophobic if God told us to exclude homosexuals from the gospel, (while freeing everyone else  from captivity). You may reject the message but it s anything but homophobic.  In reality, because the message of the Bible is true, Christians are really the only ones who love homosexuals and other alienated peoples.

4) Rape was never condoned in the Old or New Testament, but punished.  In OT law, the rapist, if caught and seen by witnesses, would (at least) have to pay restitution for the whole life of the woman who was raped. (btw, contrary to your assertion, the 7th, 8th, 9th and 10th commandments thouroughly cover both rape and chattel slavery).

5)  Your comments about women are astounding.  Women were treated better by Israel than any nation of their time.  It is a myth, created out of the air, that women are treated like dirt by the God for the bible. In fact, when compared with the current culture in America, the bible accords women with the highest possible respect. In the present day, Americans routinely and openly objectify and demean women every chance they get .... and then sadly openly lie to women to make it socially/politically/legally acceptable for women to sacrifice their own children (ironically something you accused the bible of doing).  All of these practices are condemend by the Bible. Women deserve our respect. Nothing less is acceptable or biblical.

Note: Remember also that the people of the Old Testament were often called stiff-necked because of their continued sin.  Just because you can find plenty of examples of people in the Old Testament behaving badly does not mean God condones it. The universality of sin simply demonstrates our desperate need as humans for mercy, to which God summons and offers all in the Person of Jesus Christ.

Related Resources
Common Objections to Christianity from Skeptics by Steve Hays
Does the God of the Old Testament Endorse Slavery? @Monergism
Does the Bible Condone Slavery and Sexism? by James Hamilton
Our Poisoned Culture of Libel and Defamation by John Hendryx
Why Does the Bible Condone Genocide? by John Hendryx
Holy War in Joshua: Texts of Terror? by Michael Horton
Pluralism as a Religious Philosophy by Tim Keller
Feminist Misogyny: Response to "Five Christian theologies scarier than Halloween" by Steve Hays

Pastors, You Don’t Have to Be an Expert on Everything
Michael J Kruger
Were the Gospel Writers' Memories Accurate?
Bill Mounce
Shall We Cancel the Theologians?
Carl Trueman
A Kernel Of Wheat In The Ground
Randy Alcorn
The Gospel for Bruised Reeds
Daniel M Doriani
Indwelling Sin: Is There Hope?
Daniel B. Miller
Cases of Conscience (eBook)
Samuel Pike
Who's Afraid of Social justice?
Brian Dijkema
What's Wrong of Worldview?
Brad Littlejohn
The Sanctity of Truth
John Murray
How Parents Make Their Children Religious (or Not)
Gene Veith
Jesus Christ -- The Israel of God
Kim Riddlebarger
Marks of Manhood
Nicholas T Batzig
Ten Words for a Broken Society (#9: No False Witness)
Bruce Ashford
Have We Misunderstood the Parable of the Good Samaritan?
Chris Gordon
The Art of Dying Well
John Stonestreet, Glenn S. Sunshine
Did Jesus die for the sins of every person or only for the elect?
R C Sproul, Stephen J Nichols
Job and the Deadly Spiritual Equation
Pierce Hibbs
Such Were Some of You - 1 Corinthians 6:9-11
Dr. John MacArthur
Abraham Was Not Moses
R Scott Clark
Why are People Uncomfortable with the Doctrine of Election?
Josh Buice
How to Spot Character in Your Next Pastor
Curated Resources
The “Social Trinity” vs. Nicene Christianity
Gene Veith
Engaging With 1689
R Scott Clark
Gender Questions Should Send Us to Scripture
Thomas Schreine
What Was the Downgrade Controversy Actually All About?
Curated Resources
The Importance of Gathering for Worship
Jon Payne
How to Read Genesis Theologically
Craig Carter
God’s Two Kingdoms
Scott Aniol
The Problem of Moral Evil: Calvinism vs. Molinism
Robin Schumacher
The Phinehas Option: A Pastoral call to Vigilance against Sexual Immorality
Joshua Jenkins
The Bible and Witchcraft
Bill Muehlenberg
The Sorry State of Evangelical Rhetoric
Stephen Wolfe
Preparing Our Children for Babylon
Ligonier Ministries
Who in the world am I preaching to?
Andrew Roycroft
“A Hedging and Fencing”: How Charles Spurgeon Promoted Meaningful Membership
Geoff Chang
Shall We Know One Another
J C Ryle
A Discourse of Christ our Passover (eBook)
Stephen Charnock
15 Quotes from Thomas Watson on Repentance
Thomas Watson
What Happens to Your Soul When You Die?
Kim Riddlebarger
Ligonier 2021 Detroit Conference: Blessed in Christ
W Robert Godfrey, Stephen J Nichols, Burk Parsons, Michael Reeves, Derek Thomas
Who Is the Suffering Servant in Isaiah 53?
Curated Resources
A Written Presentation of the Gospel of Jesus Christ
Dale Partridge
If God Predestines People, Why Evangelize?
Dale Partridge
The Critical Differences Between Calvinism and Arminianism
Dale Partridge
The Puritans and the Old Paths of Christian Piety
Joel R Beeke
Extraordinary Prayer for the Revival of Religion (eBook)
Jonathan Edwards
Coram Deo
Ligonier Ministries
The Function of Perichoresis & the Divine Incomprehensibility
Lane G Tipton
Doctrine of Trinitarian Perichoresis
Curated Resources