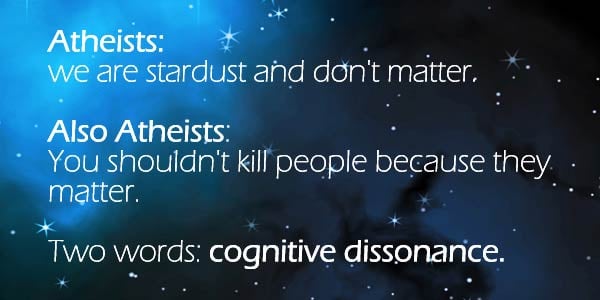 Cognitive dissonance is a state of conflict occurring within a person when they hold two contradictory beliefs at the same time. The conflict produces feelings of discomfort which the individual seeks to relieve by convincing himself they do not exist, or by adopting some other type of defensive maneuver to suppress the reality of the contradiction.

It often has come to my attention that atheists usually think (wrongly) that the Christian believes that atheists do not have any morals. But this could not be further from the truth. We believe, rather, that all people, whether they believe in God or not are created with a conscience and an innate sense of right and wrong. We are hardwired to think this way. It is an inescapable part of our nature, according to the Bible (Rom. 2:14-15). So there is no surprise at all when we see atheists, world organizations, philosophers or a simple farmer believe that human beings ought to behave in a certain way. It makes complete sense if the atheist used reason, logic and the innate sense of morality within them to establish a moral scheme. Belief in God is not required to have a moral sense of right and wrong any more than belief in air is required to take your next breath. It is not the belief in air, but the fact of air which makes the difference.

In the same way, when an atheist cites objective morals, that is, morals that others ought to exist by, it does not require the belief in God to know this. That is not the issue we have with this worldview at all. Many are probably better human beings in many respects than I am. The issue is that, if they believe in a purposeless, material universe where we are no more dignified that stardust or pond scum, then act like it. The idea is self refuting. It is irrational to believe we are meaningless chemical reactions but then arbitrarily turn around and ascribe dignity and meaning to them. It is similarly just as irrational to claim that men have no free agency and then go home to their wife and behave as if we make real meaningful choices.

If they have to "construct" morals then they are not objective. Objective means that morals are something universal and exist outside of our personal opinion. Objective means it corresponds to an existing reality.

In Alex Rosenberg's Atheist's Guide to Reality he openly claims there is no purpose to the universe, no meaning to life, no free agency, no moral difference between right and wrong, and that history has no meaning or purpose and signifies nothing.

Yet we all know that atheists do not behave in their day to day lives AS IF the above were true. To put it more bluntly, the words "as if" are just another way of saying "pretend". In recent years atheist critiques of Christianity have centered around how immoral they think the God of the Bible is. But if they believe that there is no moral difference between right and wrong, then such claims against God are incoherent. In the end, either the universe is meaningless with no real moral distinctions OR there are REAL moral distinctions. Their view forces them to live in a kind of moral schizophrenia or cognitive dissonance. It has to be pointed out that intellectually, their view is inconsistent with reality. But the God revealed to us in Scripture can and does make sense of all these realities.

And this goes way beyond morals. Below is a list of things that atheists cannot justify given their worldview:

You are either forced to affirm the absurdity of assuming all these things without justification, or place your trust in the reality of Jesus Christ who is the only solid foundation for anything. Only he makes sense of the real world we live in.